In just a few short hours October arrives and 31 days of daily Halloween posts begin here and over on my web comic Para Abnormal (both are also apart of the official Countdown to Halloween blog ring).

No plans to post about anything super special. I'll of course be updating the yard display progress. Beyond that, it'll be whatever Halloweeny thing strikes my macabre fancy that day (or night).

I'm hoping to start the dressing yard next Friday the 7th and have most of it completed by Saturday evening. As I still have many props to finish and a few to fix, it's going to be a really busy week.

As usual though, I'll be adding many props and things to the display right up to the big night. Which I've discovered has been fun for neighbors and passersby over the years looking for something new every other day or so.

This year I've got it somewhat planned out that the new things added throughout the month fit a spooky timeline and make sense. Nothing really clever, but something like all the gravestones and background elements in place first, then zombies and other ghoulish characters begin to show up day after day to join the party.
Posted by Dave Lowe on Friday, September 30, 2011 1 comment:
Email ThisBlogThis!Share to TwitterShare to FacebookShare to Pinterest
Filed under: Halloween 2011

I meant to post this on Monday, but it's turned out to be one busy week.

As I mentioned the U.F.O has been something I wanted to make for years. As a matter of fact it's the one idea I've had for Halloween that my mom has often mentioned hoping to see become a reality. And just recently my brother's girlfriend Leia also voiced her enthusiasm for it and offered her help if it moved the project up on the list.

So I thought about it and realized there was no good reason not give it a shot this year. I took Leia up on her offer. She and my seasoned Halloween helper niece Devin stopped by the the grim garage Sunday making the U.F.O. a real team build. 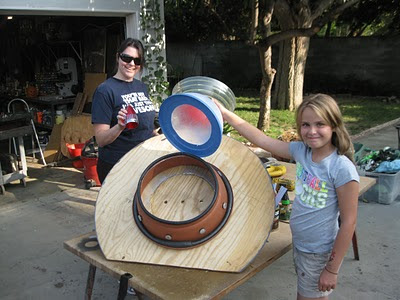 I decided to just have fun creating it by cobbling together stuff in the stash and not stress trying to make a perfect saucer shape or other elements. If this one turns out pretty good, there's always next year to improve on it.

Ideally it would be great to make it 10' wide, but I figured being a first time rooftop prop, better to play it safe and keep fairly small and lightweight so it's easily secured from sliding or blowing off. Besides, the phrase is "little green men from Mars" isn't it?

The main saucer body is a 36" plywood round with an edge cut off to give the illusion it's slammed into the roof. I made a simple frame to stand it at an angle which will be beefed up more later when screwed into a separate larger base dressed to look like an impact hole of splintered wood and ripped up shingles. Since the main saucer body is small, making other ship components exposed like the main engine (made from plastic bowls) instantly adds a larger scale to it. 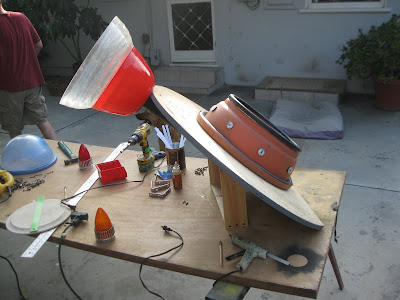 The cockpit is an overturned large plastic planter/pot with the bottom cut off. Here Leia is detailing and disguising the edges by gluing on tubing all the way around. 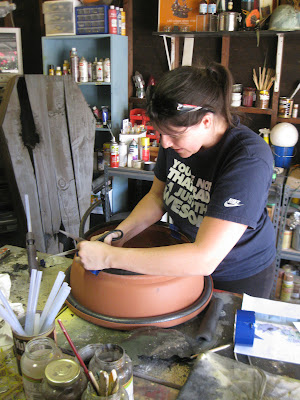 As in my sketch, I'm planning to have the cockpit dome open. So the interior will be seen and needs all sorts of cool control boards, alien tech and futuristic gizmo's.

I put niece Devin to work making them. No restrictions. I just gave her a bunch of odd junk, a hot glue gun and a loose description of what was wanted. 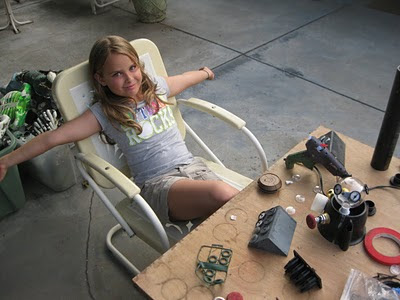 She created some pretty cool and fun things. 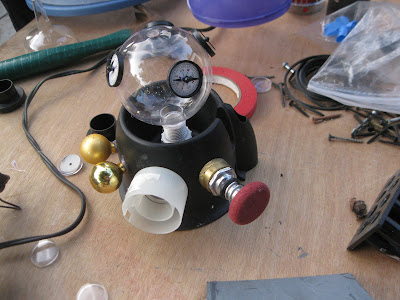 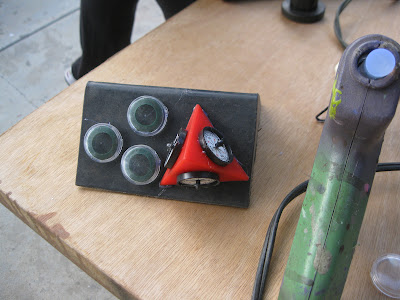 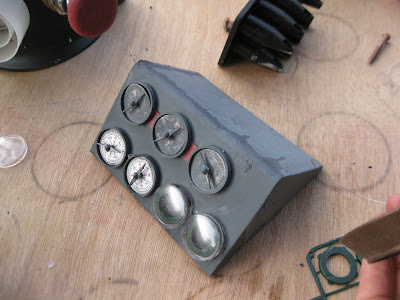 The initial test fitting and placement looked great. Devin noted it needed a chair for the alien to sit in and suggested a radar like in a submarine to watch out for meteors. Really good ideas and now on the to-do list. 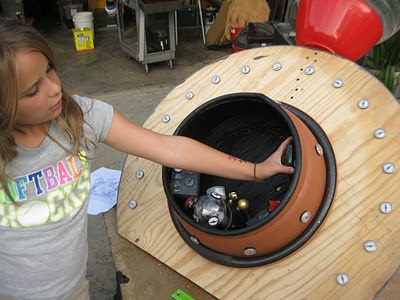 Okay, before anyone even asks, the reason there are hundreds of little plastic compasses on everything is just because I had them. Why I do and where they came from is a long story, but it's just one reason the fiancee keeps an application for the show Hoarders at the ready. Once the saucer shell is painted they'll look like giant rivets and bolts. I'll leave a few unpainted on Devin's gizmos as they actually seem to have function.

Day one of the U.F.O build went terrific with a great team. We have loose plans to get together again this Sunday and finish the ship. In the meantime I'll get back to other projects in progress.
Posted by Dave Lowe on Thursday, September 29, 2011 5 comments:
Email ThisBlogThis!Share to TwitterShare to FacebookShare to Pinterest
Filed under: Halloween 2011, Niece Devin 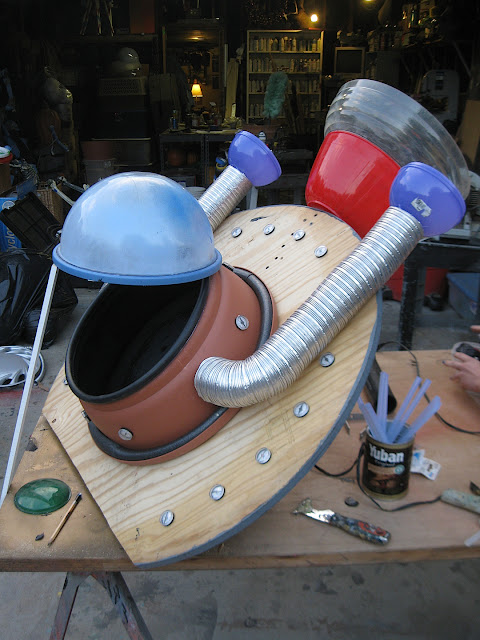 Over the past several Halloweens, I've often mentioned wanting to make a crashed alien ship on the roof. Well, it's finally happening. More details about tomorrow. 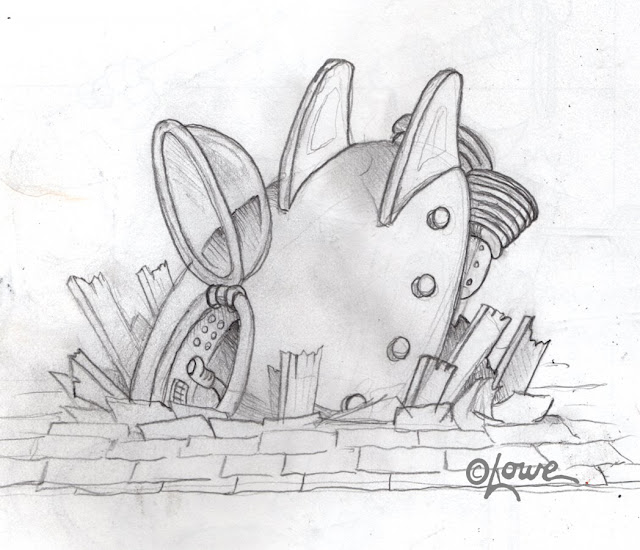 Posted by Dave Lowe on Sunday, September 25, 2011 7 comments:
Email ThisBlogThis!Share to TwitterShare to FacebookShare to Pinterest
Filed under: Halloween 2011

Posted by Dave Lowe on Thursday, September 22, 2011 4 comments:
Email ThisBlogThis!Share to TwitterShare to FacebookShare to Pinterest
Filed under: Creative Inspiration 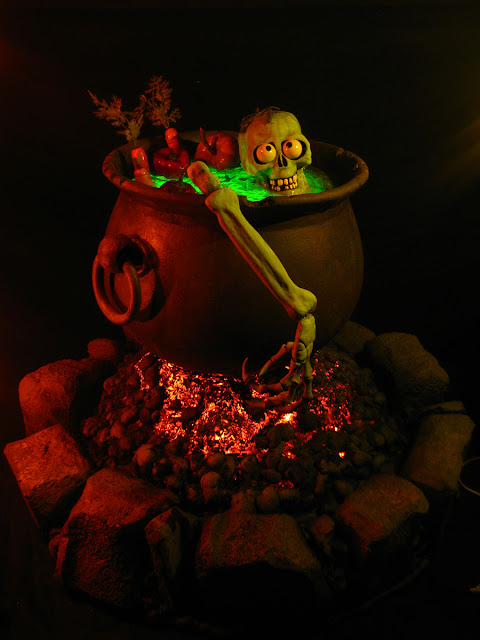 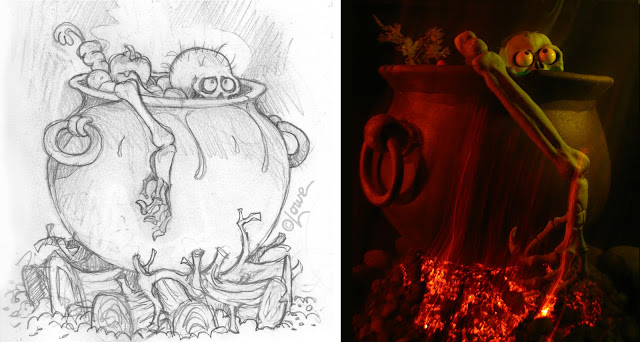 Grool is done and the first new prop ready for the lawn this year. I'll share details about how he and the green stew were made later in October. In the meantime here are links to Grool's journey from sketch to cauldron:

Lately, I've been distracted from Halloween prop making and doodling new Para Abnormal cartoons by the day job and other unrelated projects.

One such project request I just couldn't pass on though was illustrating a logo/banner for niece Devin's fall season softball team. Devin turns out to be a tough, but very good Art Director.  She's not at all timid with critique and notes on ideas and sketches knowing exactly what she wants with a clear vision. No time was wasted in the creative approval process. I'll work for her anytime. 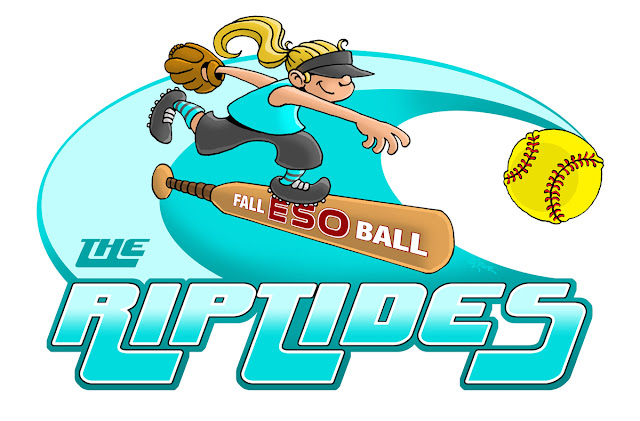 48 Days 'Til Halloween - A Scarecrow For Work: SPOOKY BUDDIES! 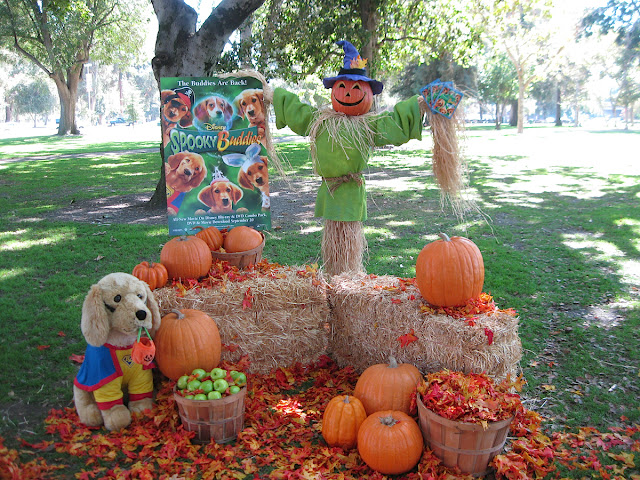 Remember that scarecrow prop and pumpkin patch set created and posted about a few times last month? I can now reveal they were for an interstitial on GSN promoting Disney's Spooky Buddies. 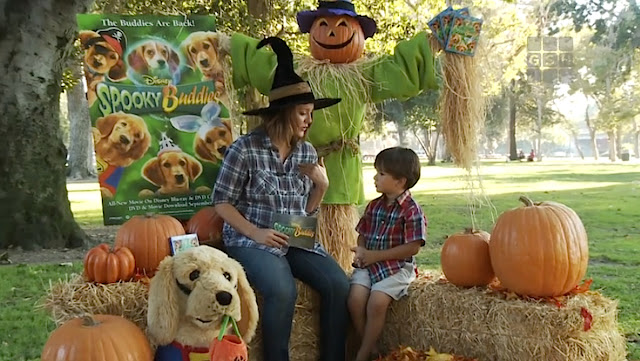 Several were filmed featuring various kids talking about spooky Halloween things. Look for them this month if watching GSN or you can see a couple right now via the GSN SNAP website.

This also explains what that stuff was in the Scarecrow's hands from the initial design sketch I first posted. 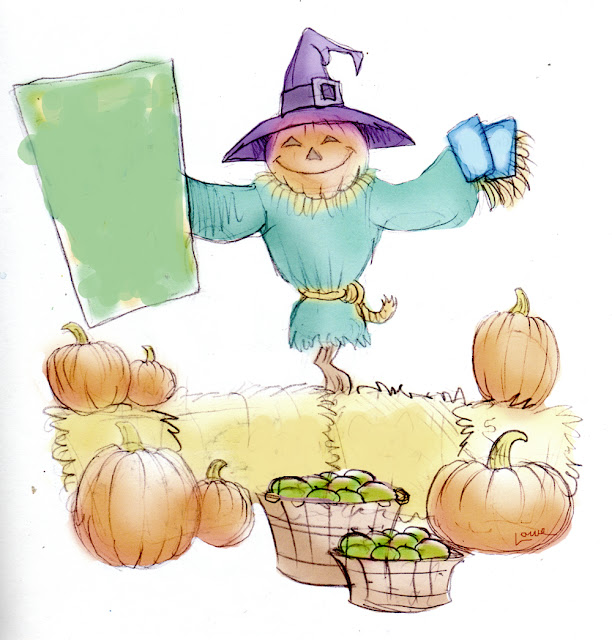 Posted by Dave Lowe on Tuesday, September 13, 2011 2 comments:
Email ThisBlogThis!Share to TwitterShare to FacebookShare to Pinterest
Filed under: Halloween 2011 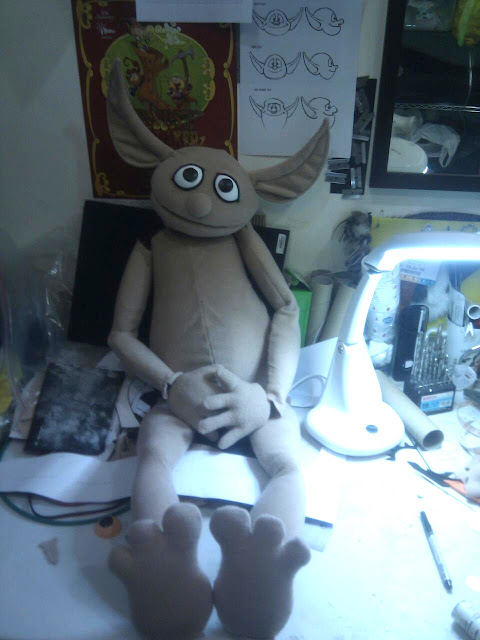 Numerous months back I posted about the illustrations I was working on for Singapore's I-Theatre production of Elves and the Shoemaker. I was surprised and happy to learn that the puppet elf characters being created for the show are based on the ones I imagined. 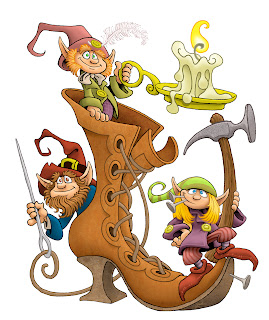 So now, half way around the world, puppeteer and all talented Paul Pistore and his crew has been bringing my drawings to life. Paul and I worked together on more than a few projects and TV shows before he moved to Singapore years ago. I'm grateful to him. Not only for suggested me as an illustrator to the theater company, but opening the door that allows us to work together again even thousands of miles apart.

Paul gave me the okay to share some of the process pictures he's been taking. 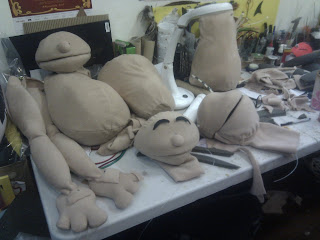 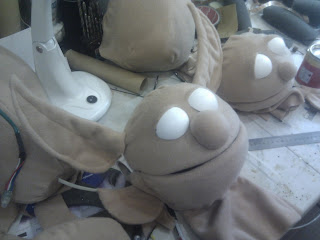 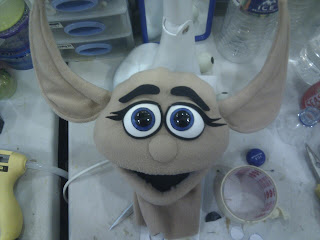 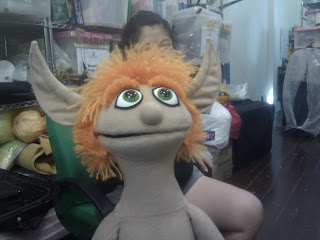 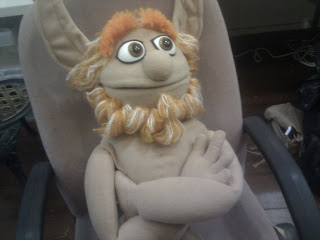 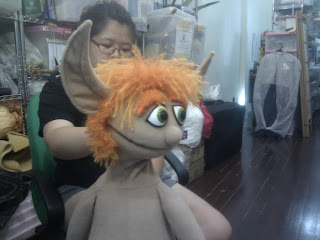 Posted by Dave Lowe on Friday, September 09, 2011 4 comments:
Email ThisBlogThis!Share to TwitterShare to FacebookShare to Pinterest
Filed under: Illustration, Props 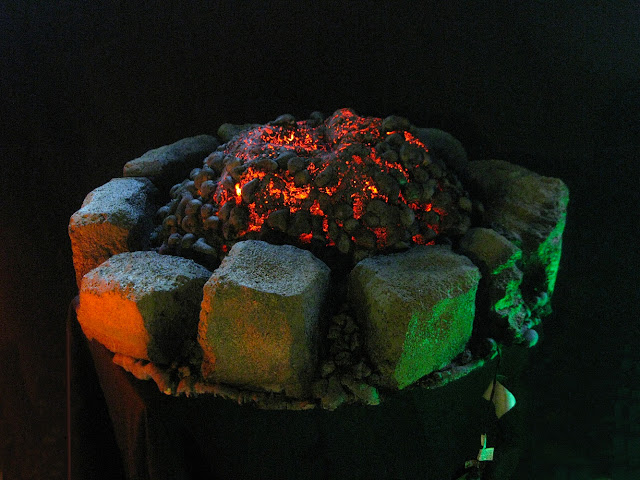 The faux fire in the pit is done. It's not as bright as I once hoped so it would cast ambient glow on other things in the display, but that's just fine. I love the subtle hot ember effect it ended up having. It's a nicer atmospheric detail that enhances rather than calling too much attention to itself.

Since we last left off in Part Two, I added more blobs of expanding foam to look like coal and (after drying) base coated the whole mound in flat black. Once the paint dried, I placed orange X-mas lights inside (the top of mound is removable). They were not arranged in any special way, just evenly spread out with small drops of hot glue on the strands, here or there, to keep somewhat in place.


With the X-mas lights on, I used a rotary tool to sculpt the foam were needed so it looked a bit more natural. I also gouged out spaces between blobs and scraped off more opaque painted areas to let the glow shine through better. 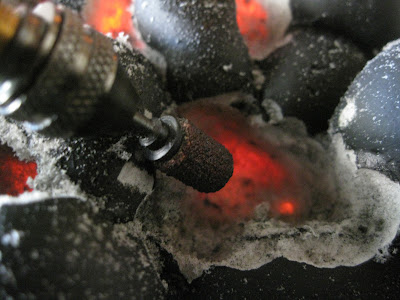 I wanted the coal mound to look somewhat believable during the day when not lit up, so I added ashy texture and detail to it. A combination of gently sanding with a fine grit paper and dry brushing on a light grey acrylic wash worked. I would of literally spray glued on real ash had I had some handy. 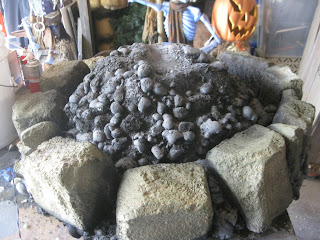 The internal glow has a simple flicker effect using the old Disneyland Imagineering trick of adding a fluorescent light fuse to an extension cord. I'm not going to try and explain how to do this in fear of not explaining it well. I learned how from an old co-worker who was a professional effects person. DON'T TRY until you've researched it thoroughly. Electricity can be dangerous.

Here's a brief video of the fire effect in action.

The cauldron sits on top very well balanced and solid without needing to secure with glue or screws. We'll see if that remains the same once I add Grool the Zombie inside. That's next. 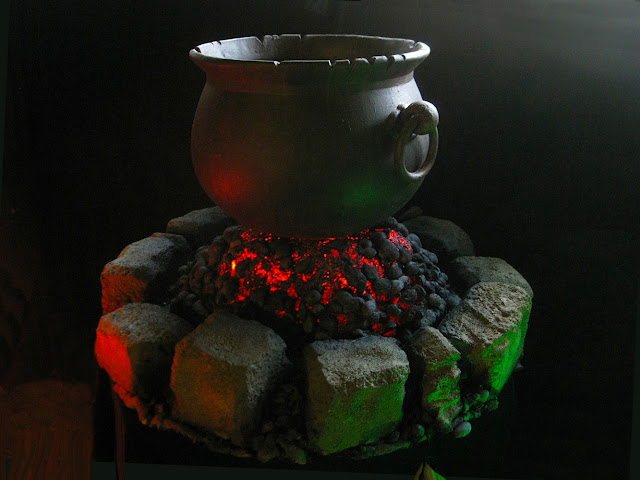 Posted by Dave Lowe on Tuesday, September 06, 2011 10 comments:
Email ThisBlogThis!Share to TwitterShare to FacebookShare to Pinterest
Filed under: Halloween 2011, Props

58 Days 'til Halloween: The Countdown Is On Again!

The new website badges for this year's Countdown to Halloween have been issued by Shawn Robare. Like seeing the first Halloween candy display in the grocery store or that first neighborhood Pumpkin Patch sign go up, it's one of those small things that makes me smile signaling the spooky season has officially arrived!

The best part about this annual month long blog-a-thon? It actually becomes a 365 day countdown to the next Halloween. You need that much time trying to read all the posts by the "Cryptkeepers" participating.


This blog and Para Abnormal are joining in again.

Wanna be part of the fun? More details here.
Posted by Dave Lowe on Saturday, September 03, 2011 3 comments:
Email ThisBlogThis!Share to TwitterShare to FacebookShare to Pinterest
Filed under: Halloween 2011

60 Days 'til Halloween: The Sidewalk of Sinister Snares

We're fortunate to have a sidewalk right in front of the house that has lots of activity all day.

Years ago I discovered that folks coming from one direction never see the Micheal Myers figure standing up against the hedge and sometimes get a good scare. Ever since I've always wanted add a few props along the sidewalk intentionally designed to add more Halloween fun for passersby.

I've had these ideas in my head for awhile and finally doodled 'em up tonight. One of these, if not both, are definitely getting made. Even if it means some other new prop must be nixed this month. 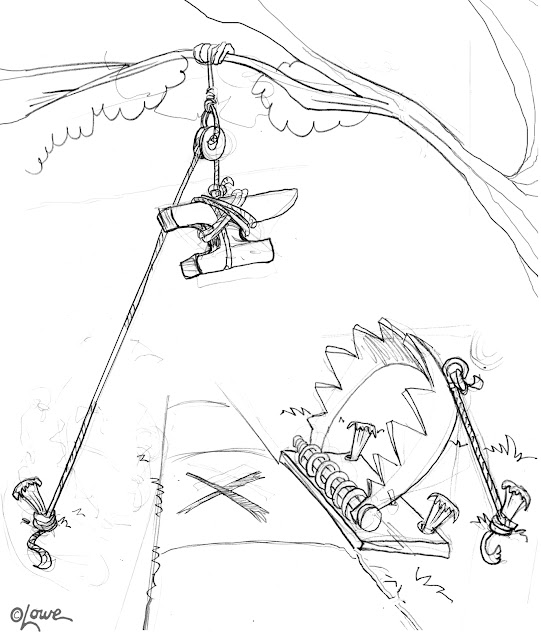