A segment on Home and Family last week became a fun creative challenge for me.

One of our show's "family" regulars, Tanya Memme, was to DIY tapping a maple tree for sap that then you can later turn into syrup.

Tapping a maple tree is actually easy to do, finding a maple tree to tap for a TV show set in Los Angeles is not. Our Universal Studios location did not have one, and finding a mature tree to bring on set from elsewhere was impossible to find. Believe me, I spent an entire week searching for.

With only a couple of days left until shoot day, the only solution left was to create a fake tree that was capable of demonstrating the tapping.

The gag required drilling a 2 - 2 1/2" deep small hole into the tree about 3 feet above a root, next you'd hammer a spout/spire into that hole to hang a bucket from to collect the sap. The real challenge was the fact that in the real world, sap often starts to slowly seep almost immediately once the hole is drilled.

Happy to say I actually made it happen. 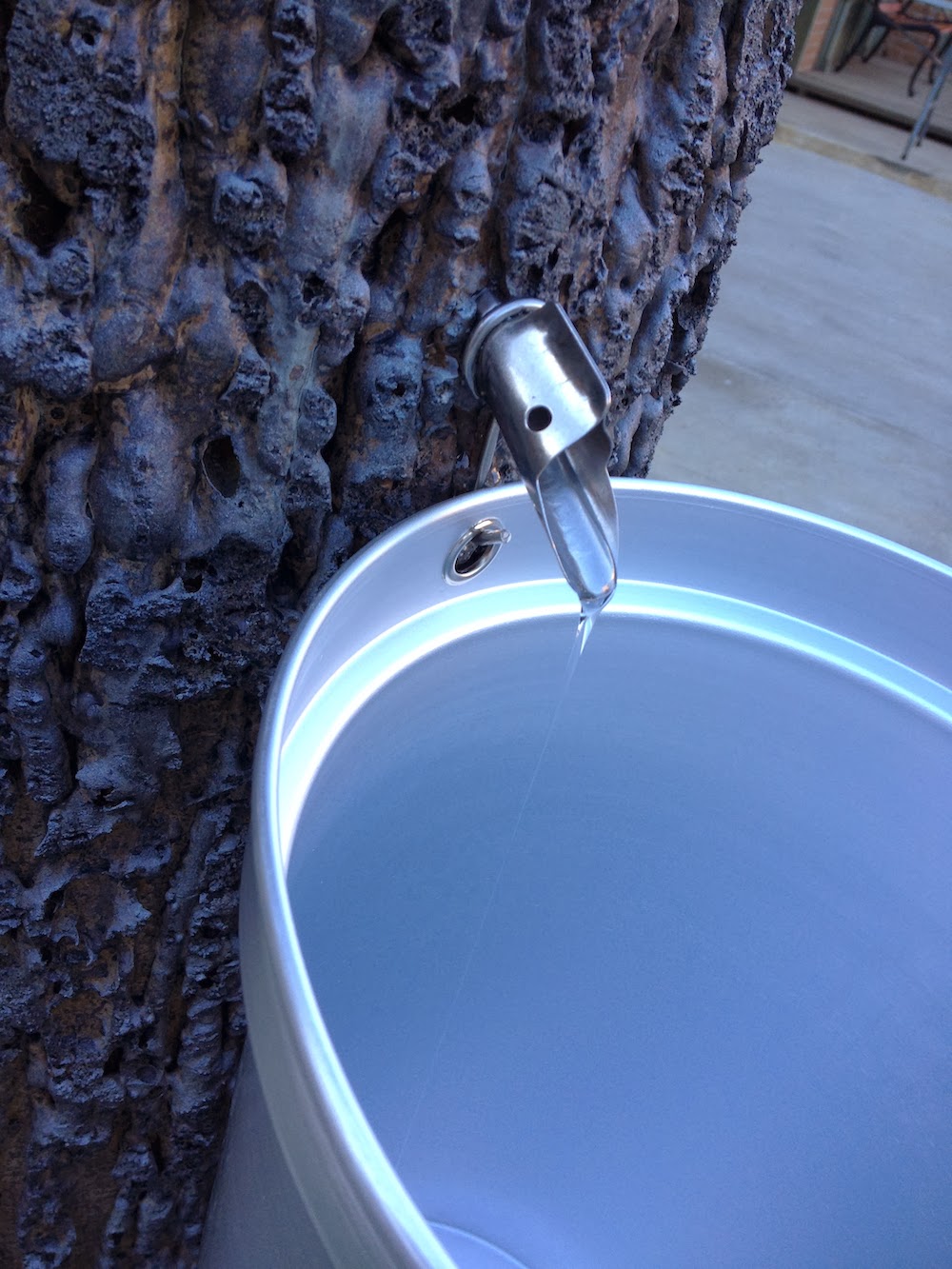 The tree itself was fairly simple to make. I stacked two 4' tall 12" round Quickcrete tubes. They were secured together by screwing two 1' x 4" ribs vertically inside. The now 8' tall tube was centered on a 3' round plywood base. Next I added mounds of Great Stuff expanding foam around the bottom of tube, this both glued the tube in place and began building up the wider root bottom. Then I began adding long thin lines of foam up and down the tubes to create bark. 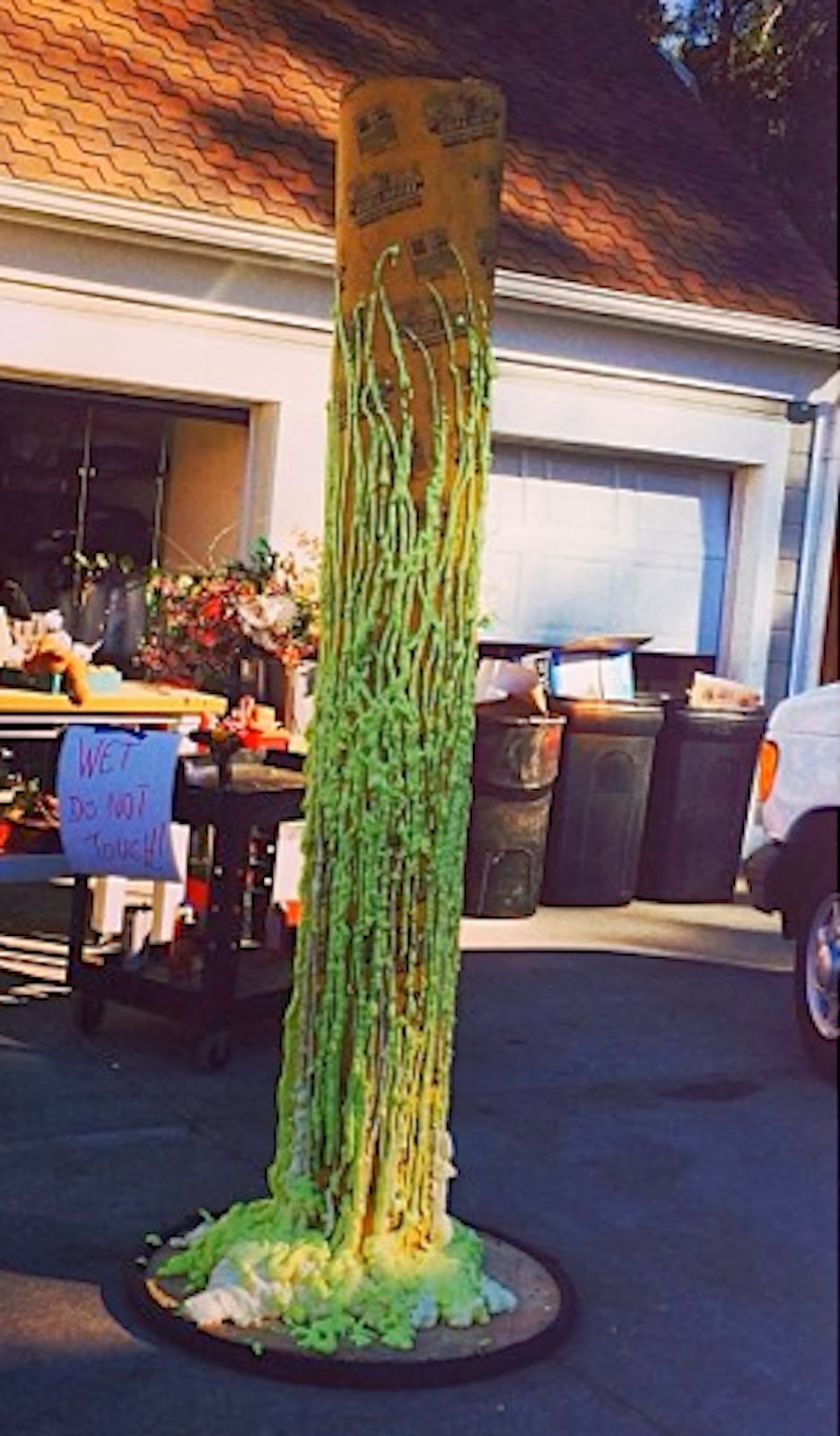 I continued to layer the expanding foam, until it had a decent tree look. This took a few hours as each layer needed to expand and set up before adding the next. No way to speed up the process, gravity makes piling wet foam on wet foam impossible without collapsing. 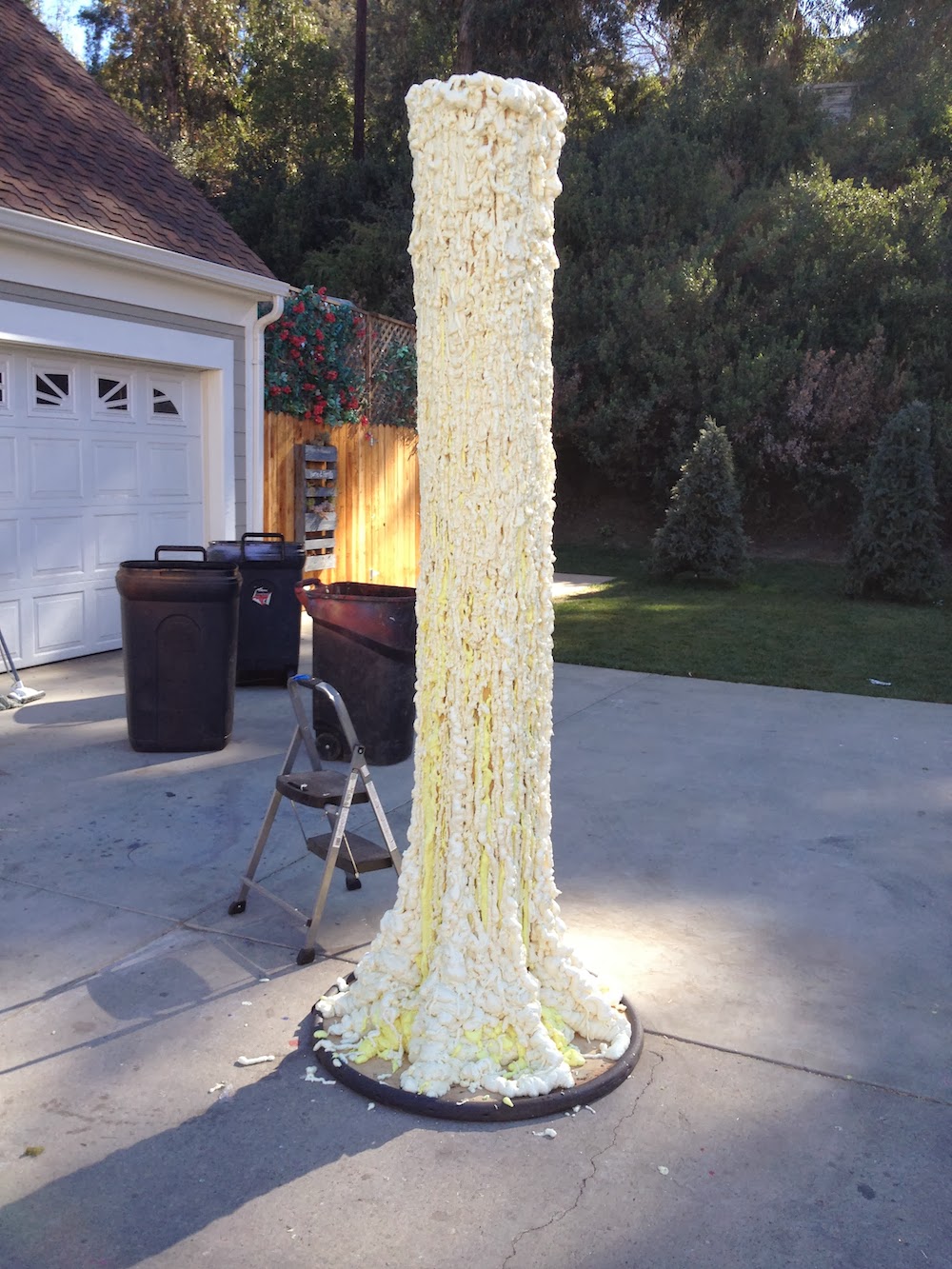 Once the final foam layer was expanded and dry, I shaved off all the bulbous top areas to create a more flat bark look. It's actually really painless to do just dragging a good, sharp parring knife up and down the trunk. The larger root portion at the base required a bit more time and true sculpting to create a natural curve into the trunk. 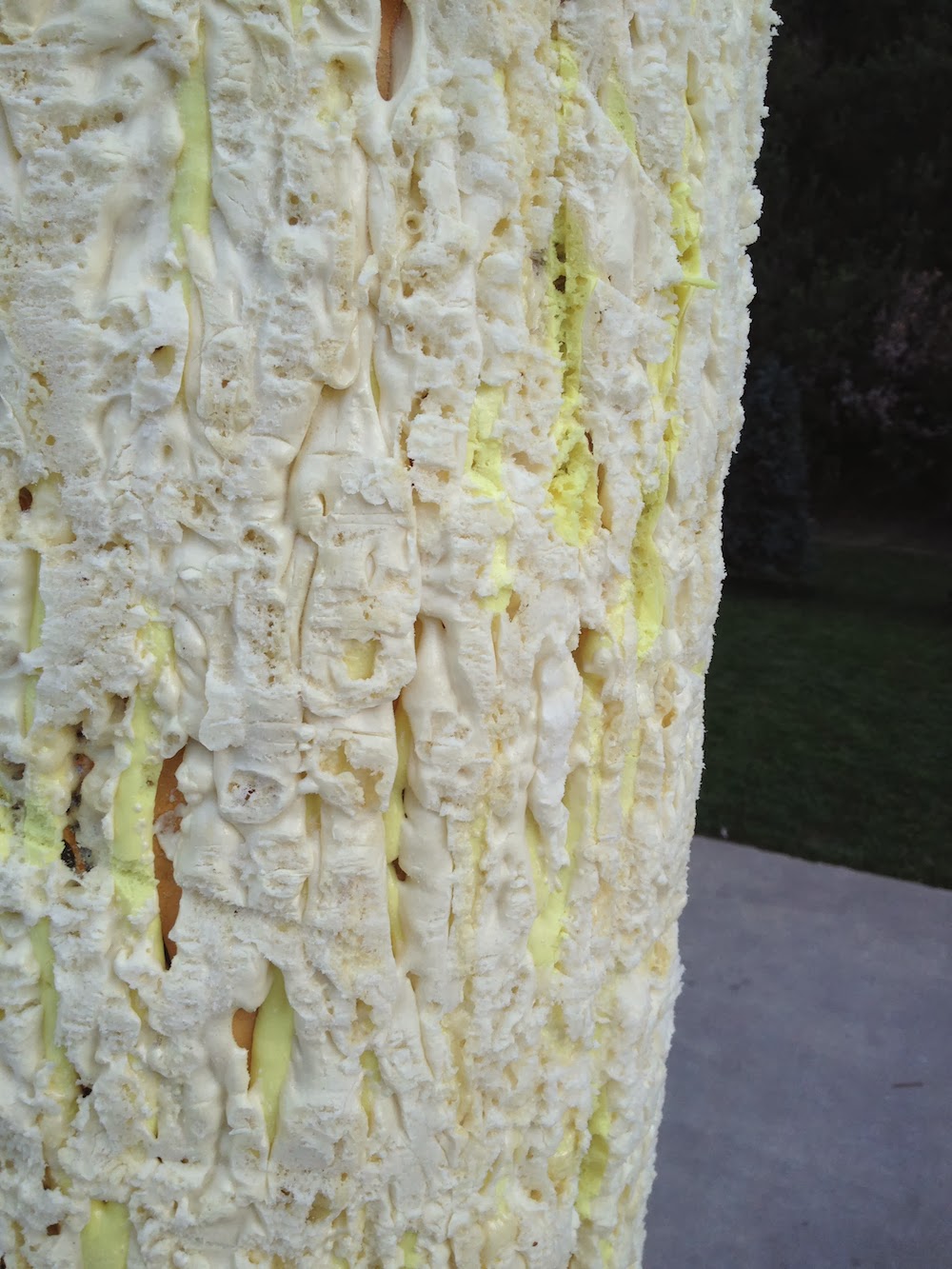 Painting it was three steps. First the entire tree was coated in flat black spray. 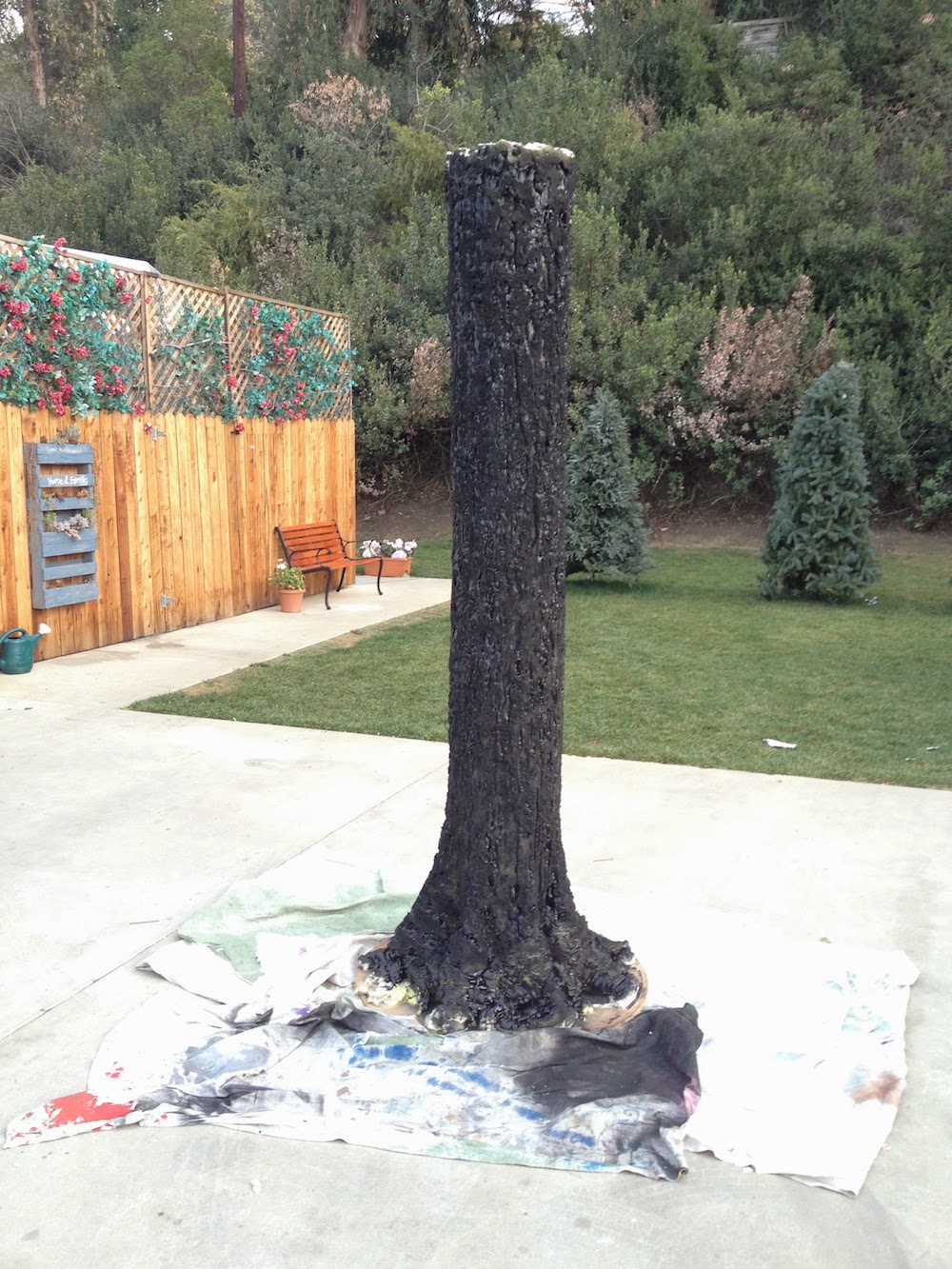 Next, a flat greyish brown was rolled on along the raised areas of foam creating some dimension. 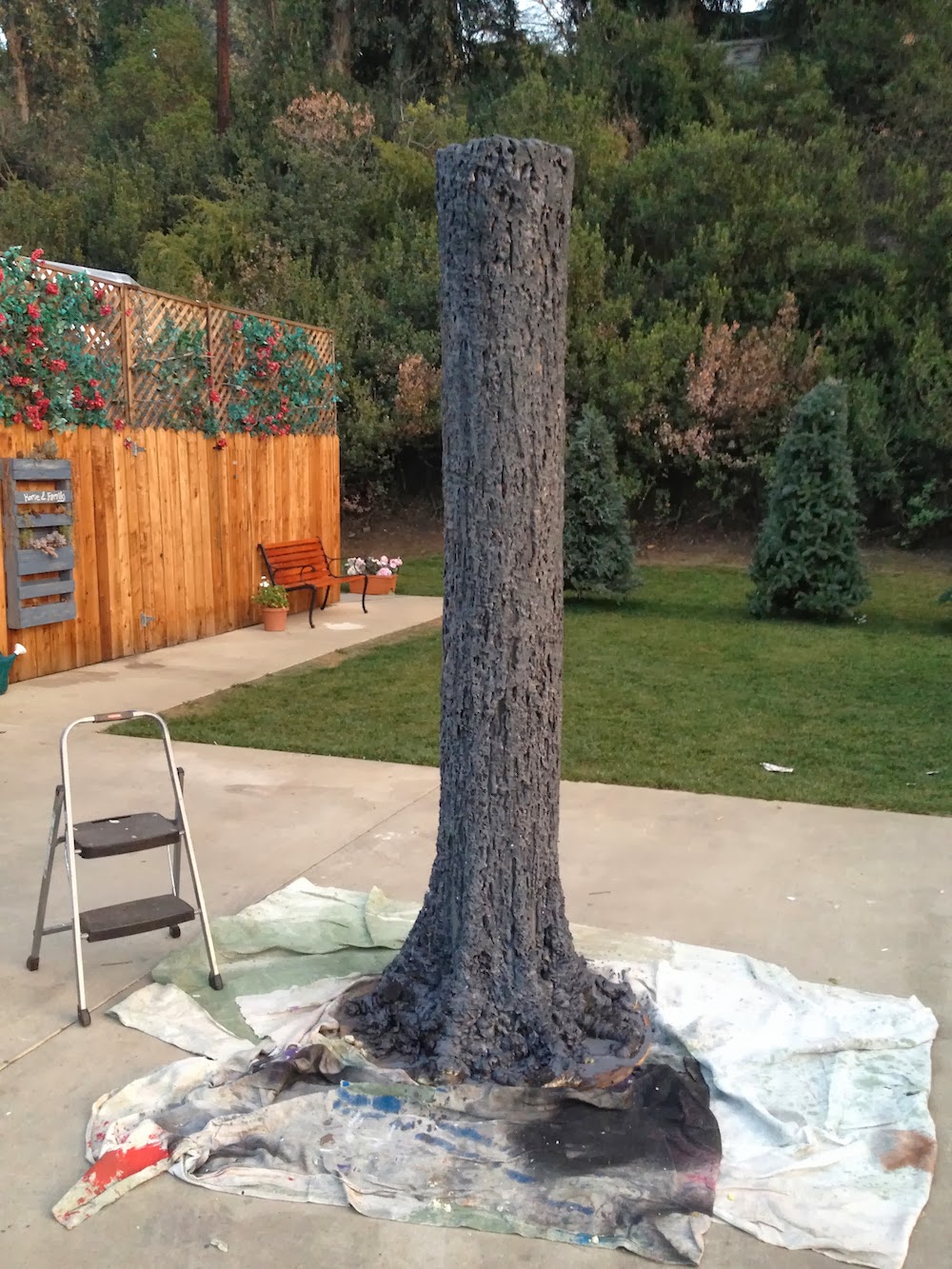 Finally, a dry brushing of lighter grey brown was added just on the bark highlights. To detail the tree I glued on small dead branches trimmed from a nearby bush and layered the base with leaves. 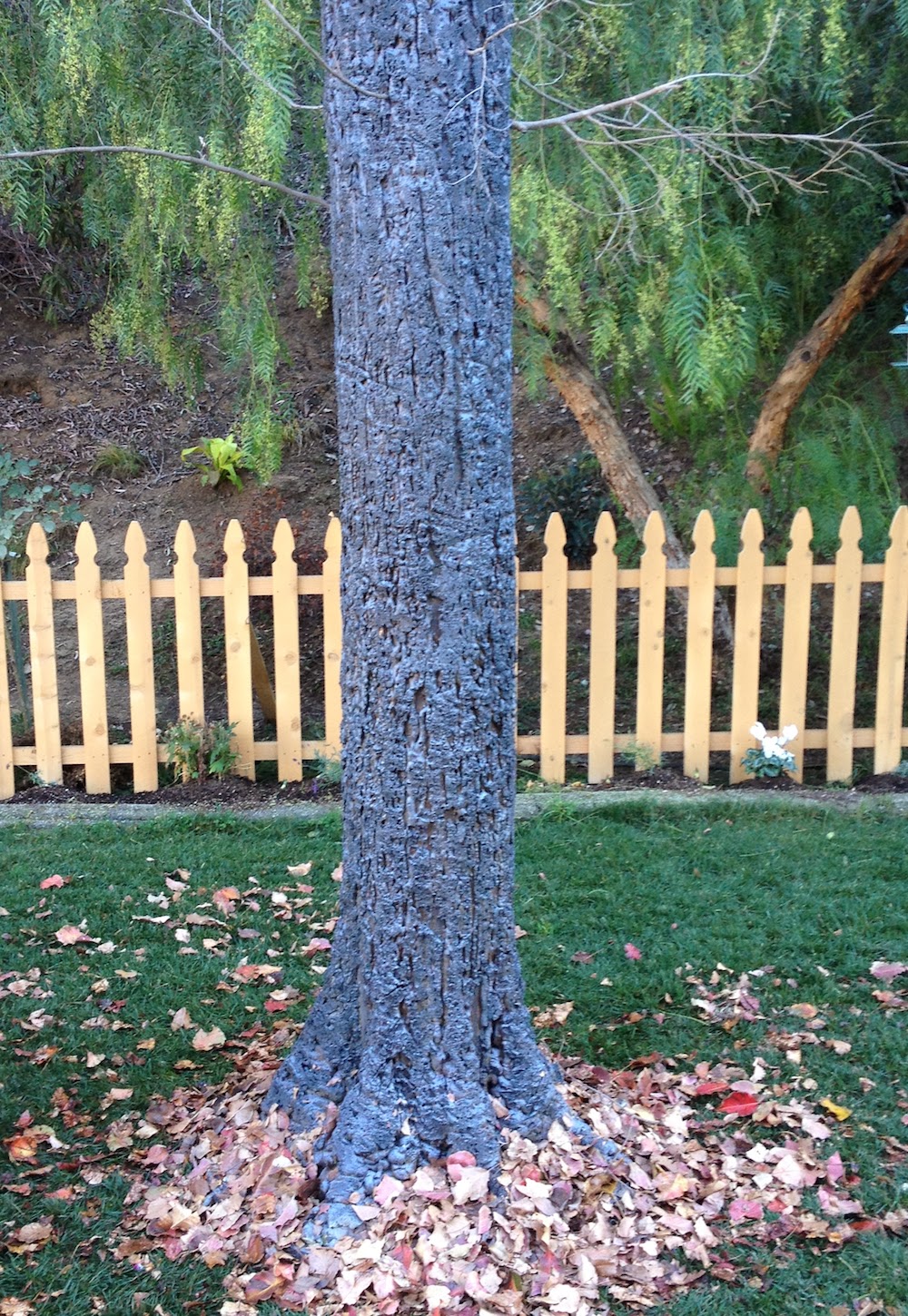 So now, the tree looked okay, but I still had to make it ooze with sap once tapped. This was done super low-tech similar to the "Dripping Head Sack" Halloween prop I created a few years ago.

A section behind the tree was cut out. Inside the hollow trunk, a wood board with an empty gallon water jug lashed/glued onto it was screwed into place. The jug was then filled with Karo syrup (Maple sap is clear before becoming syrup). 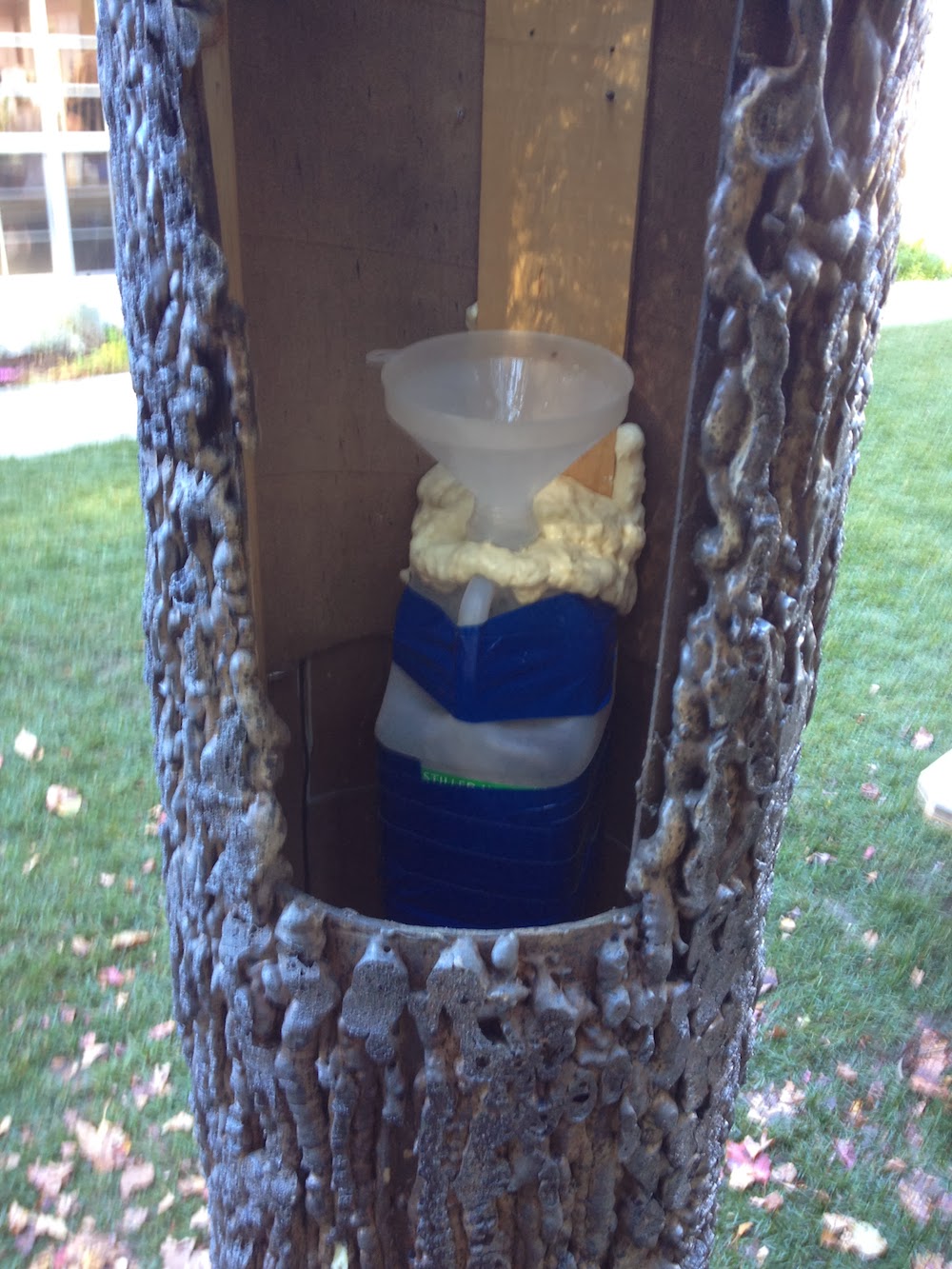 A covert mark was made on the tree face. Tanya just had to hit that mark, drill into the trunk facade, through the wood board, then pierce the jug. Which she did perfectly. The sap flowed. 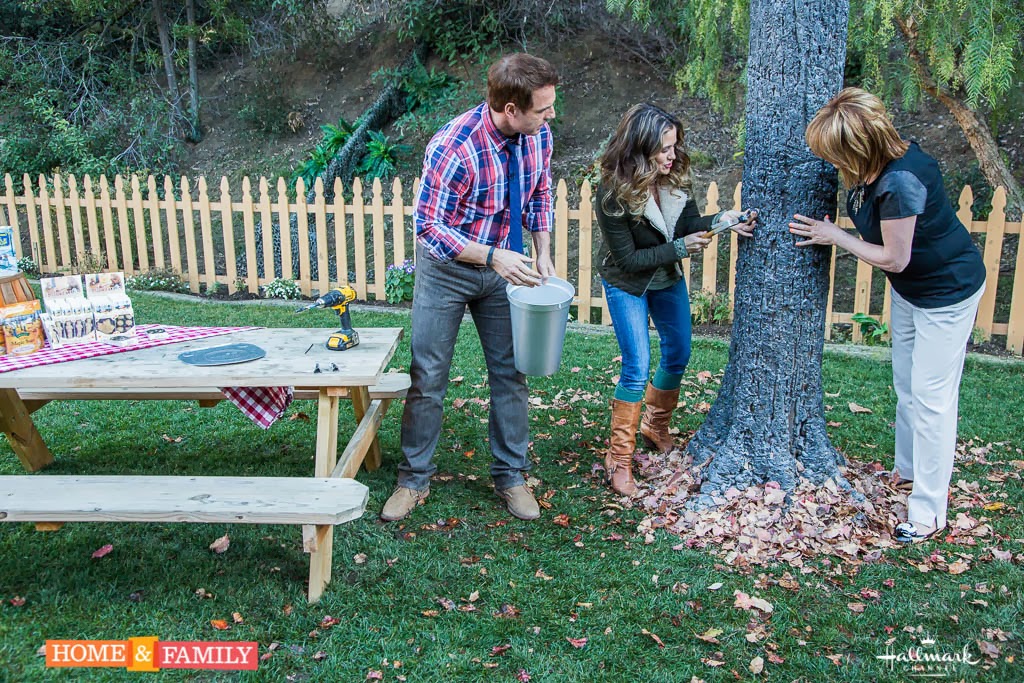 Posted by Dave Lowe on Saturday, January 25, 2014 7 comments:
Email ThisBlogThis!Share to TwitterShare to FacebookShare to Pinterest
Filed under: Home & Family, How to's, Props 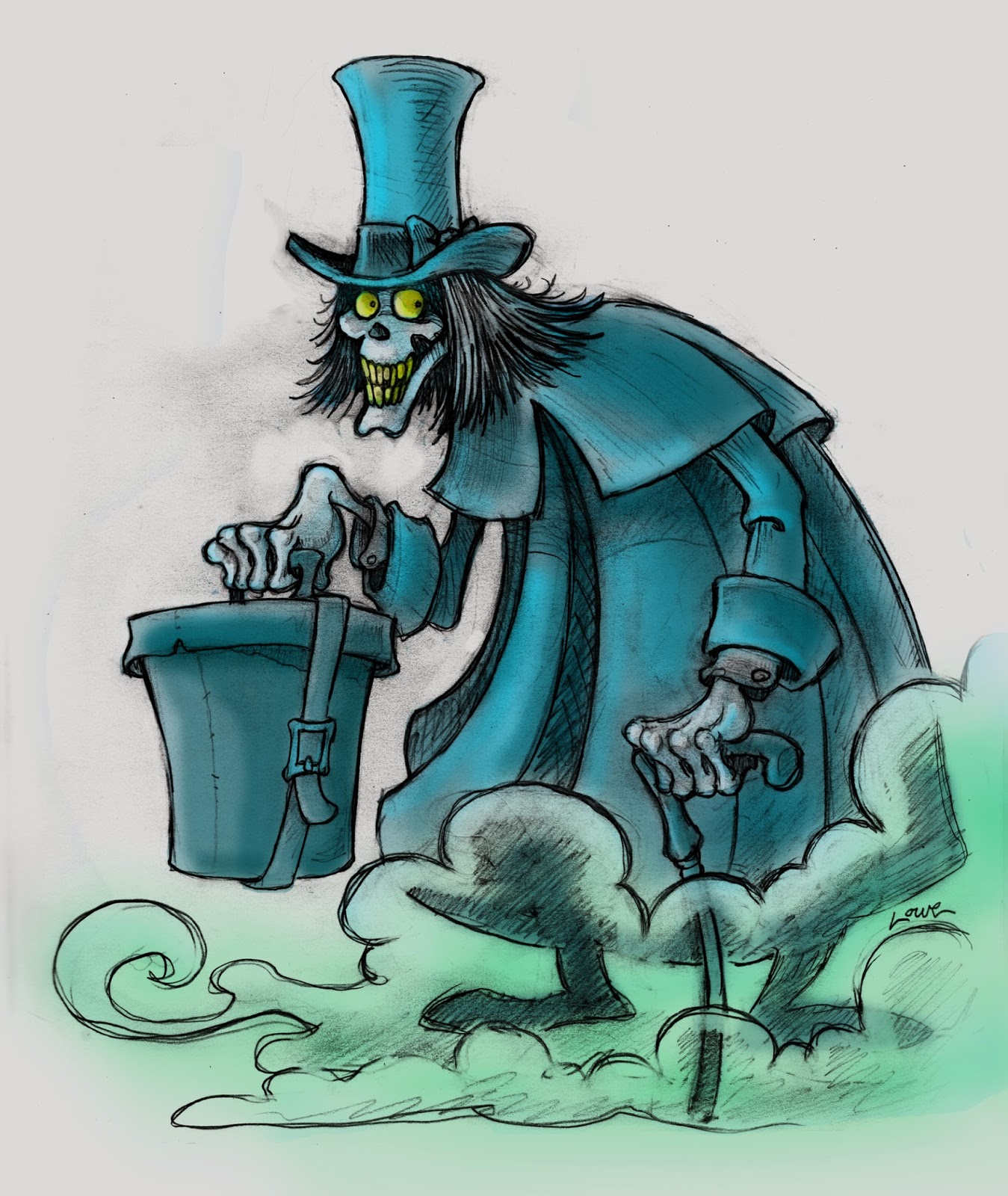 Posted by Dave Lowe on Thursday, January 09, 2014 2 comments:
Email ThisBlogThis!Share to TwitterShare to FacebookShare to Pinterest
Filed under: disney, Sketchbook

I was thinking the other day, how can I call myself a Haunted Mansion fan and NEVER have sketched any classic characters from the ride?

Well, I changed that. 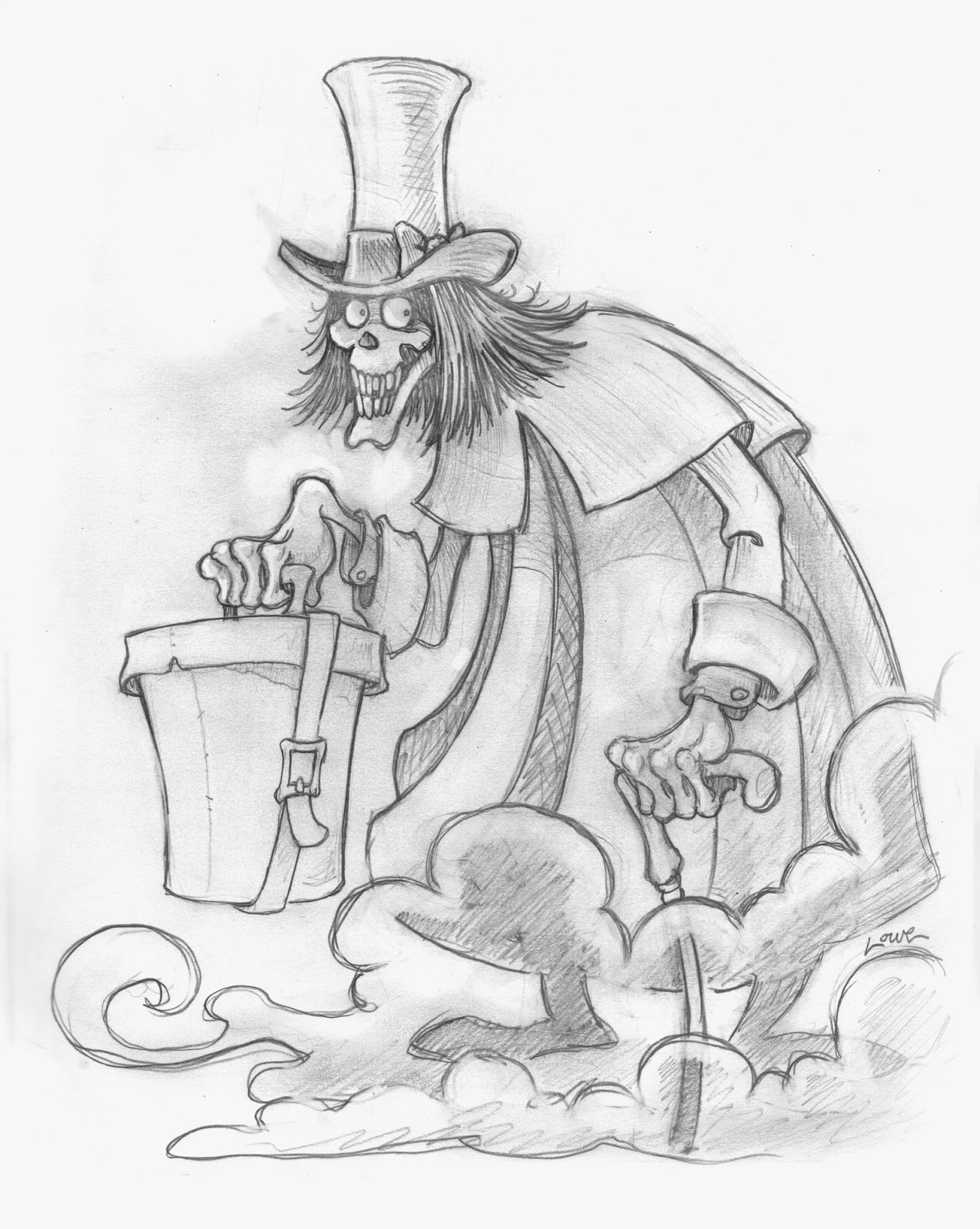