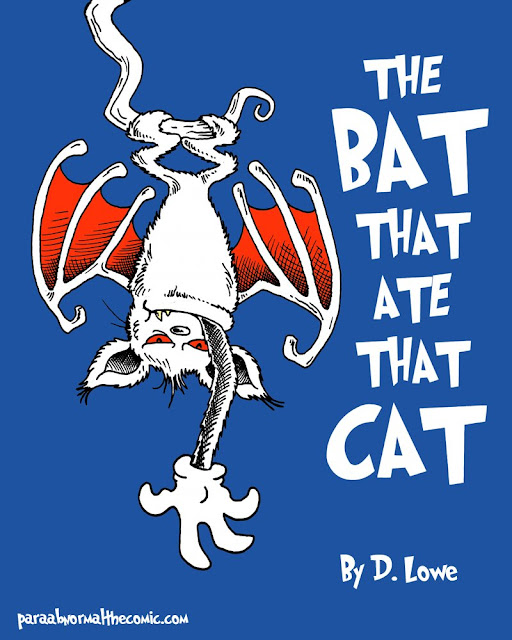 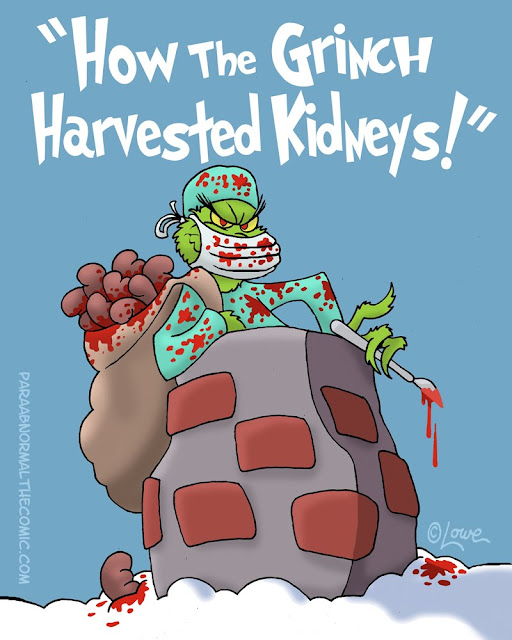 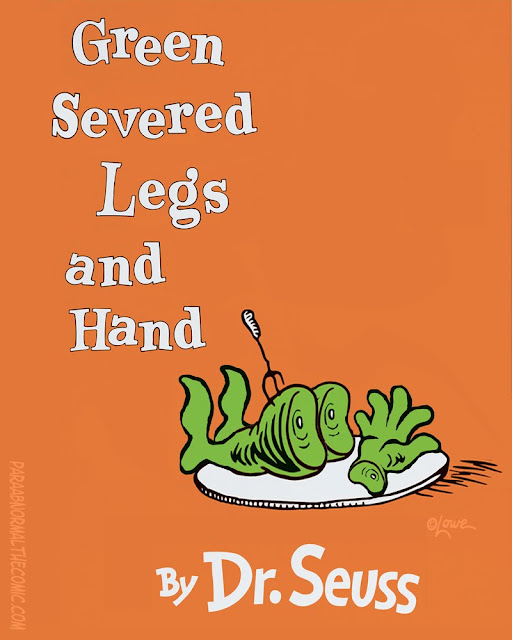 Para Abnormal has been on hiatus for a couple of weeks, but will be back Monday with all new cartoons!
Posted by Dave Lowe on Friday, April 29, 2011 3 comments:
Email ThisBlogThis!Share to TwitterShare to FacebookShare to Pinterest
Filed under: Para Abnormal 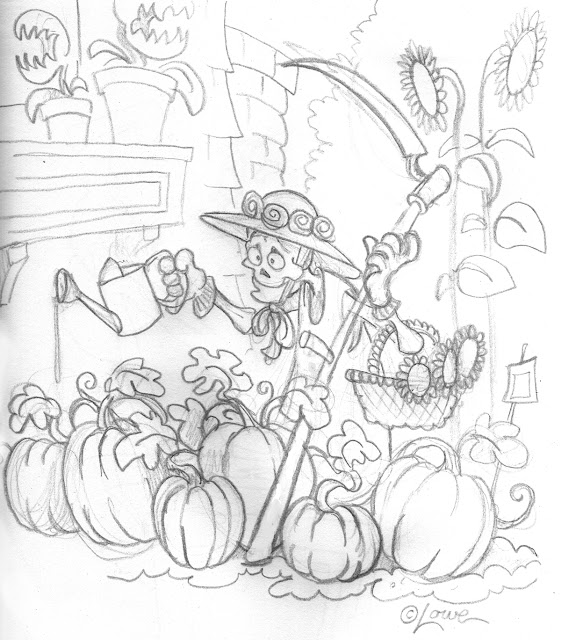 Being April and as gardens begin blooming I thought about my old prop zombie Mrs. Scaryweather from Halloween 09. She definitely needs to return this year. 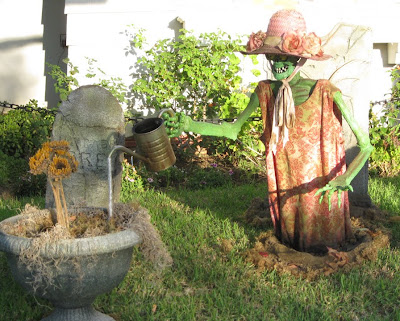 I liked her a lot back then but she was created in haste. Almost everyday that October, I was out on the lawn with super glue or wire trying to keep her old bones together. By the time I took the display down she was completely falling apart and needed a total do-over. It didn't happen though, so she skipped Halloween 2010.

This year with her return, she'll be tending a small pumpkin patch. I have some ideas bouncing around in my head on how to make a faux one, complete with vines and leaves. As you can see in the sketch at top, I think it might be fun to go a step further, creating a whole spooky garden setting for her.
Posted by Dave Lowe on Wednesday, April 27, 2011 4 comments:
Email ThisBlogThis!Share to TwitterShare to FacebookShare to Pinterest
Filed under: Halloween 2011, Zombie a Month 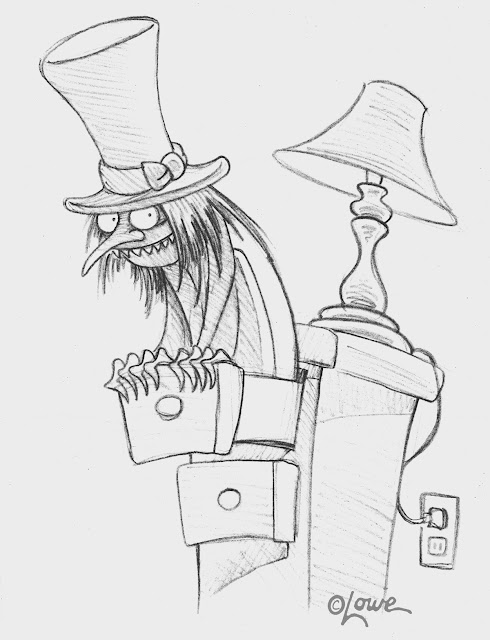 A week or so back, Halloween artist Pumpkinrot, titled a blog post The Boogeyman and simply asked So what's he look like? It inspired some doodling in the sketchbook. 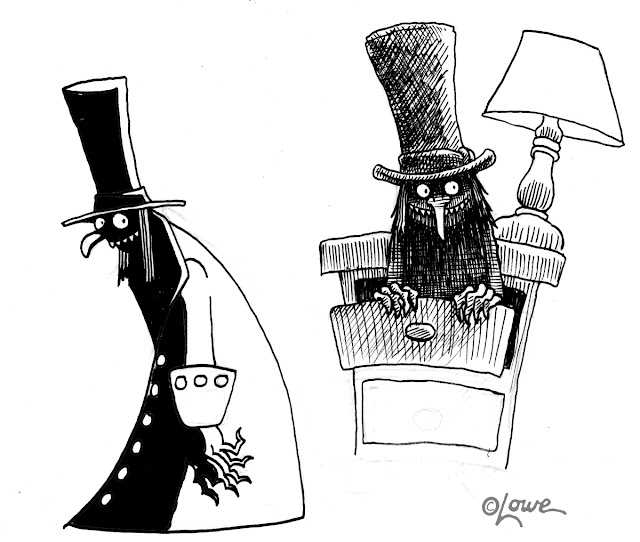 As a little kid, my Boogeyman was a tiny, evil creature wearing a long coat and top hat hiding somewhere in my bedroom just waiting for dark.

Any resemblance he had to the Child Catcher from Chitty Chitty Bang Bang was not coincidental. That character really freaked me out then and still does today.

Posted by Dave Lowe on Tuesday, April 26, 2011 5 comments:
Email ThisBlogThis!Share to TwitterShare to FacebookShare to Pinterest
Filed under: Sketchbook

The Long Epic Tale of Two Uncles, One Niece and Many Monsters


Last Sunday I decided to visit the Monsterpalooza convention for the first time. I thought it a good opportunity to make new contacts, market myself, find future vendors and... who am I kidding right? It was always supposed to be a fun adventure. Especially after inviting niece Devin and my brother Ted along with me.

After Ted and I picked Devin up. I warned her there might be some REALLY scary things and let us know if she got too freaked out. Well, based on the excited look on her face thinking about it. I got the feeling she was going to be just fine.

I had read that the day before was so crowded that parking was impossible to find and many folks were held on line outside for hours until others had left to make room. We prepared ourselves for disappointment if we couldn't get in. Luckily, we found a nice close parking spot on the street and only four other people in line for tickets in front of us. We practically walked right in.


Our first stop was the museum full of classic and recent film monsters displayed in a Drive-In theme. It included a large movie screen playing old horror films. The detail I liked most though, besides the fun entrance marquee pictured below, was the stands linking the ropes around the displays. Each had the speaker boxes you hang on your car door window. 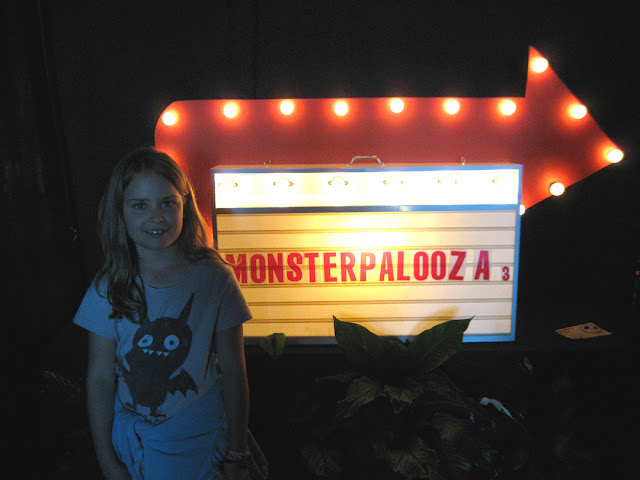 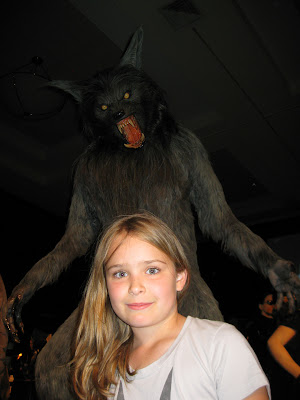 Just a few feet into the room, stood a towering werewolf from The Howling. Devin was stunned declaring it to be the scariest, but best one she's ever seen. We both agreed that my Halloween yard needed one this year.

Moving along, Devin looked at all the displays with interest, but was a bit detached. I understood.

Despite how I tried to explain who Vincent Price was and the backstory of other characters, they weren't from films she's seen yet.

To her, I sounded like the teacher from the Charlie Brown cartoons mumbling nostalgic stuff about old stuff.


Then we came upon a minotaur from Narnia. Devin geeked out. She recognized it from her favorite movies. Now she was connected to it all. 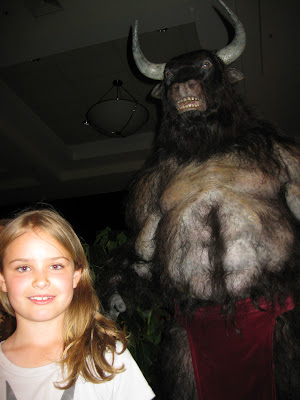 She asked if it was the real one from the movie or just a copy. Yeah, even at 9 years old she gets the difference. I saw the plaque that said it was by KNB FX who created many of the creatures in those films. I told her that it must be a real one. Uncle Ted added how sometimes numerous costumes are made for an actor to wear because they can get beat up and worn out while filming.

"That's soooooo cooooool!" she said. It was her first celebrity sighting in the museum that soon included two types of gremlins. The funny Joe Dante film creatures and the creepy one from Twilight Zone the Movie, which she just watched recently with her Dad.


The flood gates had opened and hundreds of questions and comments followed about everything. The day now became the educational field trip about all things concerning movie monsters, madmen and maniacs that I sort of secretly hoped would happen.

After the museum, we wandered the show floor taking in all the sights. It was here that the curriculum strongly emphasized the importance of keeping a good sense of humor about the subject matter. 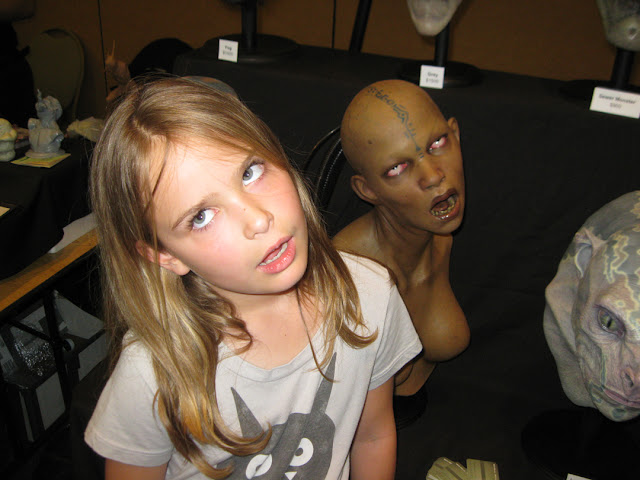 Devin was star struck seeing a life sized version of the Creature from the Black Lagoon. Believe it or not, he's another celebrity to her. His was the first monster movie she ever saw. Devin's uncle Kirk gave her the DVD a few years ago being a favorite movie of his when he was a kid.

Devin demanded pictures of the Creature be taken immediately like some seasoned cryptozoologist fearing he might quickly disappear. 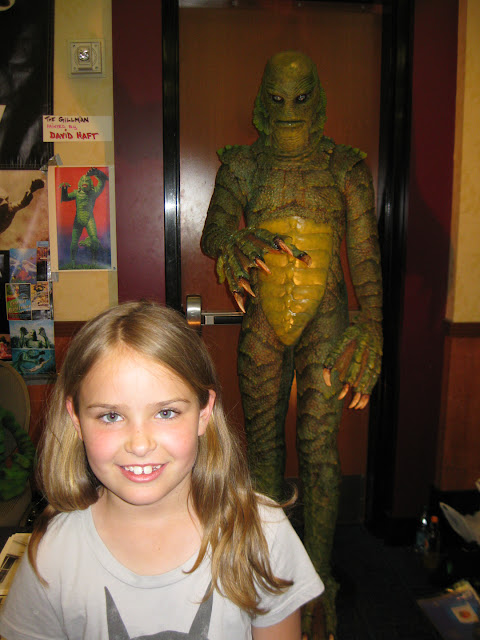 Our team cryptozoologist also mentioned a Yeti she had seen in the distance earlier. Although I couldn't see it among the crowds, Ted and I trusted her younger eyes with less feeble vision and walked the maze of booths and tables in search of him.

The irony that the Abominable Snowman remained elusive in a room full of monsters was not lost on me.

Sure enough, Devin was right. There was a Yeti! He was really friendly at first as we asked for footprints, hair samples and DNA.

But then Ted pulled out the camera.

He went ballistic! We just barely got away with our lives!

After that beastly encounter we needed to wind down and relax. The Moebius Model Make 'n Take seemed the perfect thing to do. Especially after we learned, as fate would have it, a Creature from the Black Lagoon snap together kit would be made!

Watching Devin put together a monster model warmed my heart remembering my days building those classic Aurora kits when I was a kid. Ted noted something about this event later. Not only were the Moebius people fantastic with the kids, but there was no sales pitch to buy any of their products after. It was just for the pure fun of making a monster. 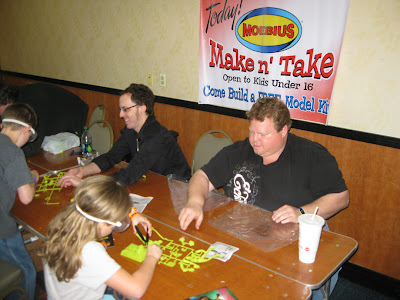 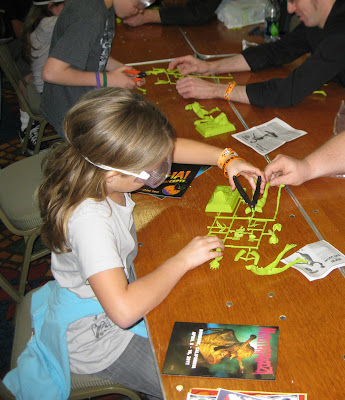 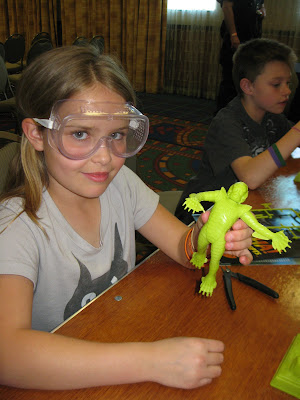 Our time at Monsterpalooza was soon to end, so we backtracked our footsteps looking at stuff we missed earlier. All the while, Ted and I continued to fill Devin's brain with useless knowledge about Lon Chaney Jr. and Sr., Bela Lugosi, Boris Karloff and any other monster info we knew.

She soaked it in like a sponge!
We went too far. Below is the last picture taken that day. Ted and I were never heard from again. 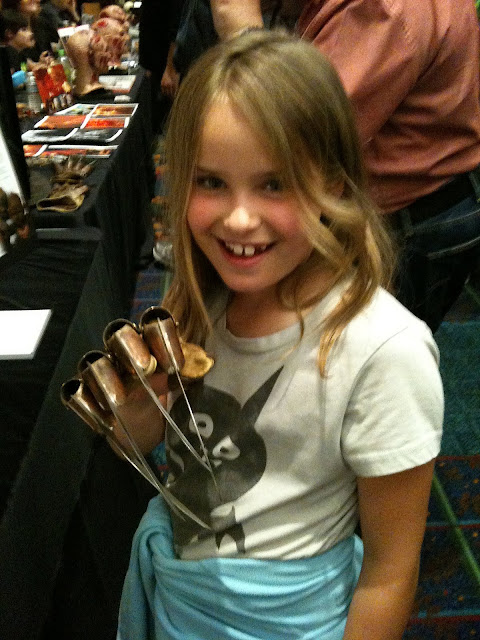 Posted by Dave Lowe on Sunday, April 17, 2011 6 comments:
Email ThisBlogThis!Share to TwitterShare to FacebookShare to Pinterest
Filed under: Niece Devin 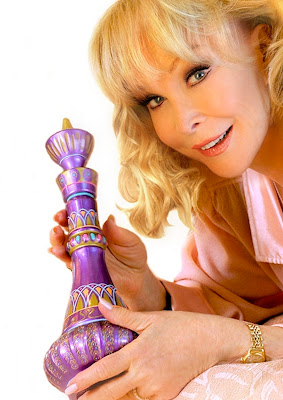 It's always inspiring to know one of television's most iconic props was a time and budget restricted simple creation.

This might be old trivia to some, but I've just learned from watching an interview with Barbara Eden publicizing her new book that the famous bottle from "I Dream of Jeannie" was only a store bought Jim Beam whiskey decanter hand painted by one of show's prop people.

Sure enough, I found this old 1960's magazine ad via the web. 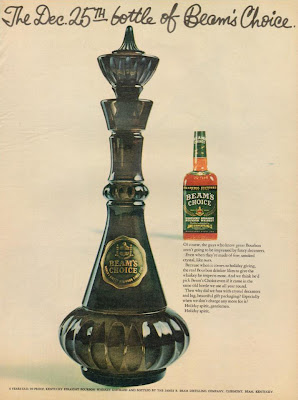 Speaking of TV magic, here's a couple of other images I found. Remember those fun scenes of Jeannie when inside her bottle like this? 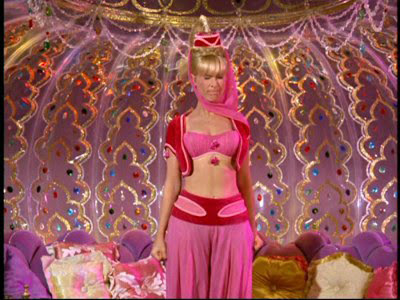 Well, numerous lessons in set design and construction can be learned just by looking at this behind the scenes picture... 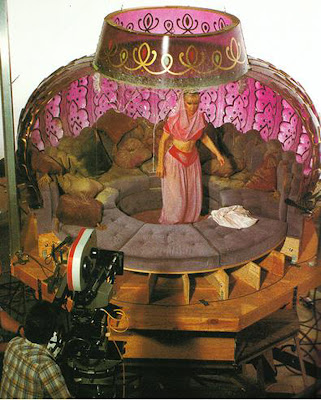 Posted by Dave Lowe on Friday, April 08, 2011 7 comments:
Email ThisBlogThis!Share to TwitterShare to FacebookShare to Pinterest
Filed under: Creative Inspiration

Elves and the Shoemaker 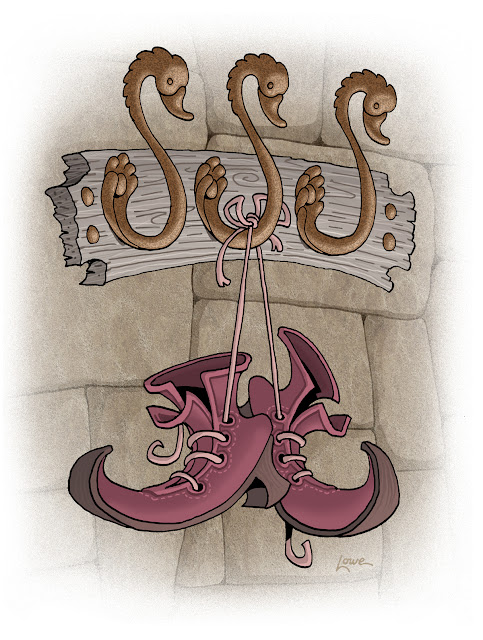 I'm currently working on poster and program illustrations for a children's theater production of Elves and the Shoemaker. It's the same company I created the Arabian Nights art for last year, Singapore's ITheatre.

This original production has a fun take on the classic Brother's Grimm fairy tale by weaving well known characters from their other stories into the play. Some are the shoemaker's customers. Others just live in his village.

Lots of thumbnails and sketches for this project. Two illustrations done so far, four more to go. Click on any image to enlarge. 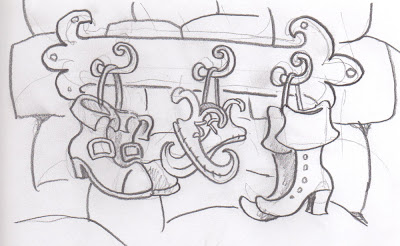 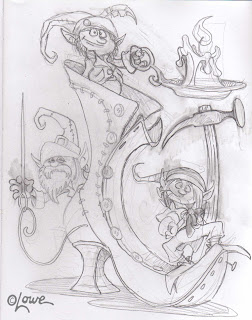 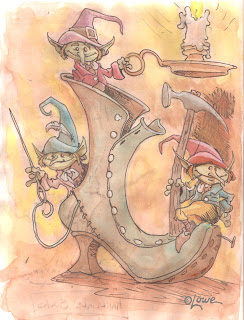 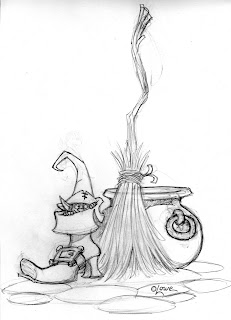 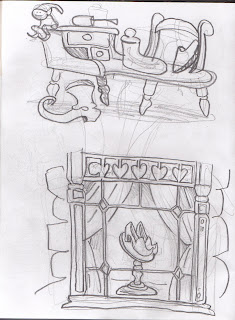 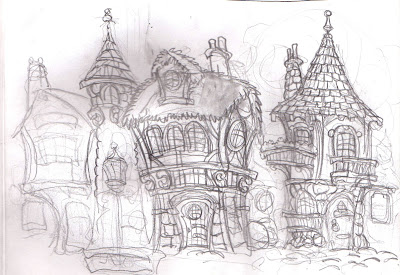 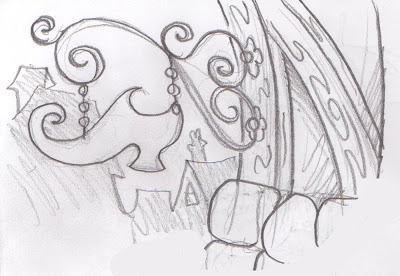 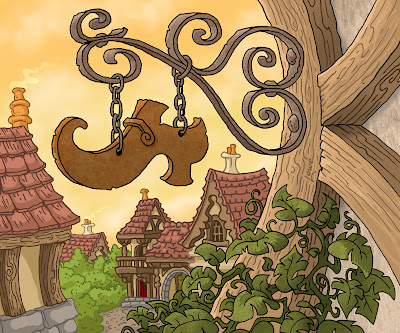 Posted by Dave Lowe on Wednesday, April 06, 2011 4 comments:
Email ThisBlogThis!Share to TwitterShare to FacebookShare to Pinterest
Filed under: Illustration

I've sometimes daydreamed odd, creepy and fantastic scenes like this. The distinct suburban San Fernando Valley setting really makes it a favorite. This could be my street. Houses like this, minus the octopus of course, are everywhere. The trailer in the driveway is a terrific detail, was the octopus caged in it?

There are prints available on Brosio's website, click here. I may have to start setting money aside and order one someday.
Posted by Dave Lowe on Tuesday, April 05, 2011 1 comment:
Email ThisBlogThis!Share to TwitterShare to FacebookShare to Pinterest
Filed under: Creative Inspiration

Yes, yesterday's post was a gag. I was so surprised by the responses to it. I hope there's no hard feelings from anyone. I thought it an over the top concept, but these days, I guess such a thing could happen and Halloween haters do exist.

For the record, Valley Glen is a wonderful town and I've always had nothing but support from the neighborhood and community when the display goes up every October.

It's nice to know the Internet Halloween community is just as supportive and would rally to one's side against such nonsense. A special commendation to reader "Terrormaster" and all, who went out of their way to decode my bogus newsletter revealing it's a hoax.
Posted by Dave Lowe on Saturday, April 02, 2011 6 comments:
Email ThisBlogThis!Share to TwitterShare to FacebookShare to Pinterest
Filed under: Halloween 2011

Even though I basically live in Van Nuys, technically our area is called Valley Glen. I subscribe to our neighborhood association newsletter which is e-mailed out as a PDF a few times a year. I just got the winter edition.

Below is a clipped portion of it that tells me I should be more involved in city government. Click on images to enlarge...