Should of asked a long time ago. 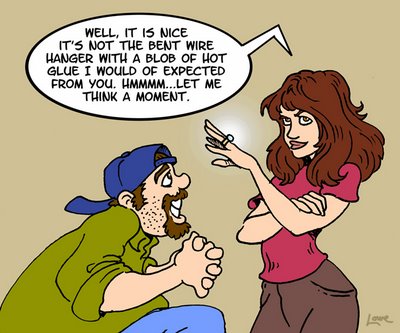 Long ago we worked together and my job was to give her what she asked for. I found myself smitten by her looks. I soon came to hate her though because of an argument at work.

8 years later - I can't imagine my life without her even though I still have to provide what she asks for and we still debate that work argument.

We have survived all the typical relationship drama.

We have survived the unexpected left and right turns in life.

She is my best friend.

She is my inspiration.

She is my biggest pain in the ass and she knows it.

She is the only person I've ever wanted to be a better person for.

I'll worry about it tomorrow.
Posted by Dave Lowe on Saturday, July 29, 2006 11 comments:
Email ThisBlogThis!Share to TwitterShare to FacebookShare to Pinterest
Filed under: Cartoons 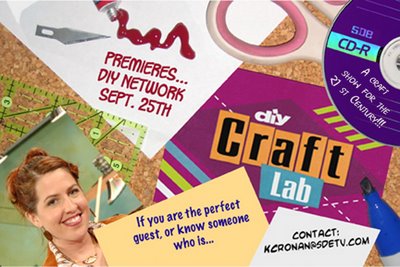 Andrew the Field Producer on DIY's upcoming Craftlab hosted by Jennifer Perkins called me yesterday. He needed art to print up as a hand out card while filming segments for the show later this week at a craft convention. It was a last minute idea and needed to get to printers ASAP! He was leaving in 2 days. I knocked out the above graphic sitting at my desk in 20 minutes (if that) The tools strewn about is a picture of my worktable as it was with a little staging and photoshop.

Here's the part that kills me...it actually took longer to upload and e-mail out the art than it took to create...freakin' dial up. Seriously, when I also had to e-mail out a revision or two, I might of well just printed and cut a hundred or so myself. It would of taken less time.

Anyway, catch the show in September. I'm off to research high speed connection to the web.
Posted by Dave Lowe on Tuesday, July 18, 2006 No comments:
Email ThisBlogThis!Share to TwitterShare to FacebookShare to Pinterest 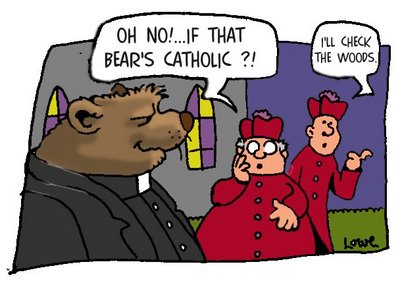 Posted by Dave Lowe on Saturday, July 15, 2006 No comments:
Email ThisBlogThis!Share to TwitterShare to FacebookShare to Pinterest
Filed under: Cartoons

Attack of the Chupacabra!

Today, working in my studio, I had a weird and scary experience.

While sitting at my drawing board from the corner of my eye I saw a blur pass by my open door along the path outside. I assumed it was one of my girlfriend's cats. I gave a casual glance twords the door. Then, I noticed something strange...a long leathery scaled tail that followed the blur disappearing as it passed beyond the door frame. Being odd I went to the door and peaked my head outside and saw something that is only of urban legend...

I froze for a moment...it was real! It was as many have described: lizardlike, slimey with huge bulging eyes and long sharp talons! I composed myself enough to grab my camera. Below are several photos I took of the creature and details of my encounter. I'm sorry the pictures are blurry. My hands were shaking in fear.

Here is the first photo and I included a picture of my 12" work boot to give scale to the beast.

Click on all pictures below to experience the unexplained and horror up close. 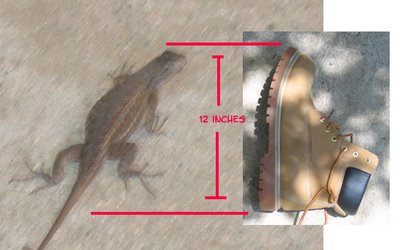 I know many people under extreme distress often remember details bigger than life, but I'm confident the Chupacabra I saw was atleast 12 inches long if not 3 feet long...and might be 8 foot tall if it was standing on it's hind legs.

It leaped on the wall and it's massive claws cracked and crushed the brick as it climbed upwards. I think the damage it did has severly harmed the integrity of the wall and I might have to re-build it.

Once the hideous mythical beast reached the top it turned twords me and let out a horrible screech. I covered my ears in fear they might rupture and bleed... it was that loud! 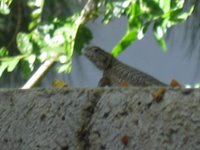 Just then... it lunged at me! I snapped the controversial below picture when I ducked as the Chupacabra flew past my face! 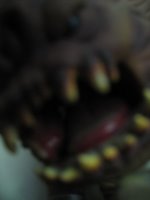 I'll never forget it's foul breath and the nightmarish feeling of it's teeth as they brushed against my throat.

I thank God for my instinctive monster defensive reflex actions since childhood. I was prepared when the CHUPACABRA ATTACKED!

Some say my blurry photos look like a common lizard in Southern California only 4 inches long.

Some say, my thrilling photo of the demon's teeth about to tear into my tender flesh is a close up of a toy I have in my studio.

Some say I should get out more and be less fearfull of nature and not make up stories to explain why I scream like a girl if I see things as common as a pidgeon.

I say...I lived the horror.