This blog turned four years old a few days ago. Looking back and reviewing the past, I've actually kept true to my first post mission statement... 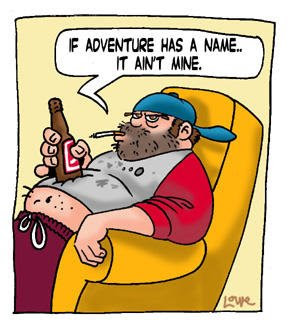 Good or bad, a big thank you to my friend JAG for introducing me to Blogger way back in 2005. I mentioned at work one day I wanted a portfolio website but had no knowledge of how to create one or the money to hire anyone. History should know, this was the conversation...

Jag said "How about a blog page? They're free."

I paused, feeling destiny upon my shoulder and answered

4 years from now I might look into this Twitter thing.
Posted by Dave Lowe on Thursday, July 30, 2009 3 comments:
Email ThisBlogThis!Share to TwitterShare to FacebookShare to Pinterest
Filed under: Adventures of Dave 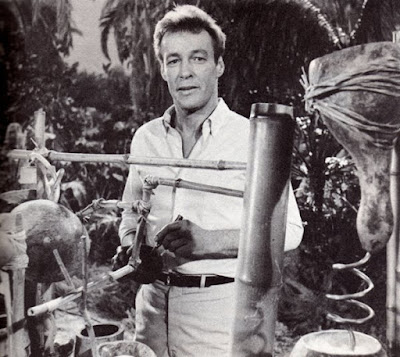 When I think about people who helped put me on course to what I do for a living and fueled my love of cobbling together found objects, the Professor was a huge influence. Like many of my generation, I grew up watching daily re-runs of Gilligan's Island. Whenever I saw one of the many goofy bamboo gadgets or coconut husk contraptions, I was inspired. Two obvious reasons why...they were fun looking and had that great slapped together, handmade look which made me think I could make one.

I was thrilled when I discovered a small chapter in Russell Johnson's memoir HERE ON GILLIGAN'S ISLAND (1993) about his appreciation for the talent and skills of the "prop guys". Often props (and the people who make them) are taken for granted, especially when they are designed to look cheap. Intentionally making a prop look clunky and handmade with fun visual appeal is, I believe, a whole art form unto itself. Props like this look thrown together in haste and may fall apart any second but they can't, needing to withstand hours, days or weeks of filming, especially if a hero prop. Something as basic as a drinking cup can often be challenging to create. As the Professor wrote...
"At first, the prop guys gave us real coconut halves to drink from. The only problem was that these hairy coconuts became soft and began to leak under the studio's hot lights."

He didn't mention what the solution was, wish he did, very curious. Here are some fantastic concept design sketches from the book showcasing the thought and care that went into the castaway's silly creations (click image to enlarge). 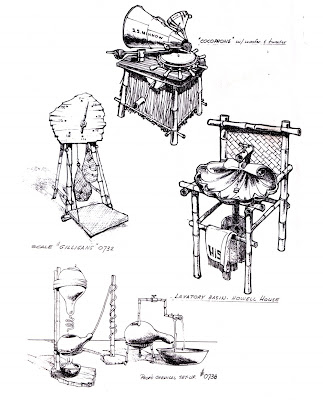 I should thank the people who actually were the genius Professors for their inspiration. Gilligan's Island art directors William Craig Smith and Malcolm C. Bert and the set decorators James Crowe, Ray Molyneaux and Hal Gausman.
Posted by Dave Lowe on Wednesday, July 29, 2009 No comments:
Email ThisBlogThis!Share to TwitterShare to FacebookShare to Pinterest
Filed under: Creative Inspiration 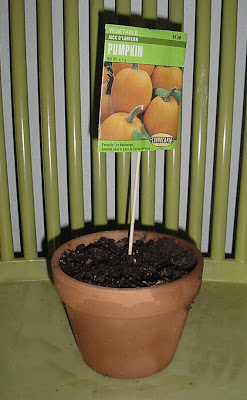 What's most important though is being eco-friendly, helping to make our Earth a little better adding to the garden. Now, I better get busy melting foam and spray painting... Halloween props don't make themselves.
Posted by Dave Lowe on Thursday, July 23, 2009 5 comments:
Email ThisBlogThis!Share to TwitterShare to FacebookShare to Pinterest
Filed under: Halloween '09

I'd like to bring more creepy humor into the decorating this year. I was thinking of prop ideas when it hit me, I already came up with some over at Para Abnormal. Here are some possible cartoon candidates. It would be fun to bring one or two of these to life or create some variation of. 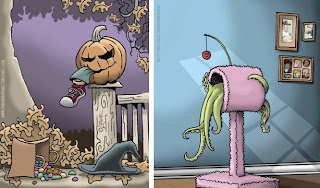 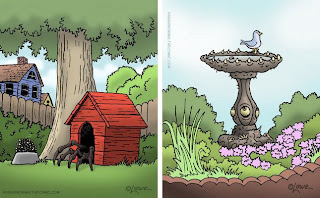 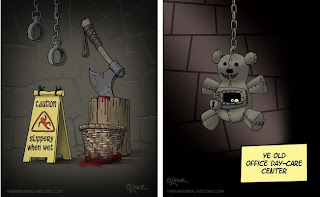 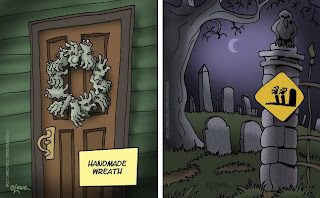 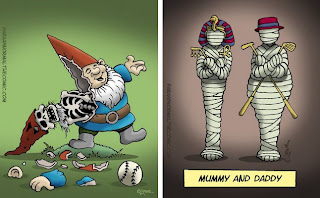 can be found in the summer edition of Connecticut's Seasons magazine for a nostalgic essay by Steve Metcalf. 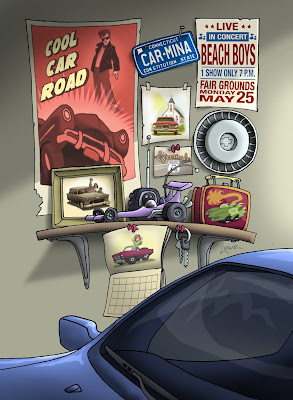 Posted by Dave Lowe on Friday, July 10, 2009 No comments:
Email ThisBlogThis!Share to TwitterShare to FacebookShare to Pinterest
Filed under: Illustration

Posted by Dave Lowe on Wednesday, July 08, 2009 No comments:
Email ThisBlogThis!Share to TwitterShare to FacebookShare to Pinterest
Filed under: Creative Inspiration

Inspired by the holiday weekend, I added to my Halloween collection of curiosities. 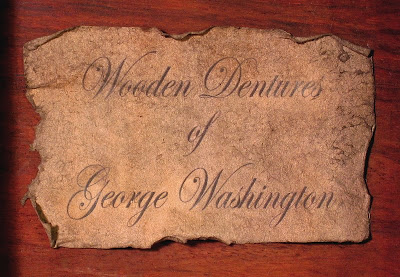 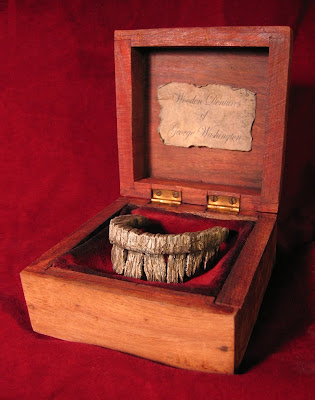 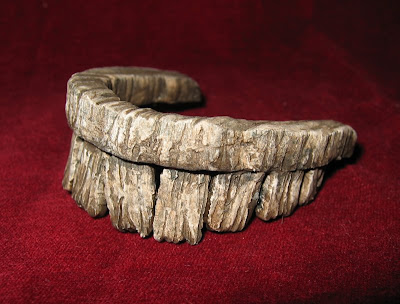 The dentures are made from Sculpey polymer clay. The gum line and individual teeth were sculpted separately. I used a small piece of old wood to press the texture into the clay. After baking, all were glued together and painted. The label was done on my computer, printed, trimmed and aged with watercolor. I had the old box and glued in a pad of felt.

A fun, weird, yet patriotic project that took less than an hour.
Posted by Dave Lowe on Sunday, July 05, 2009 12 comments:
Email ThisBlogThis!Share to TwitterShare to FacebookShare to Pinterest
Filed under: Cabinet of Curiosities, Halloween '09, How to's, Props

I don't mean to imply anything...

but there is a coincidental visual evolution here. 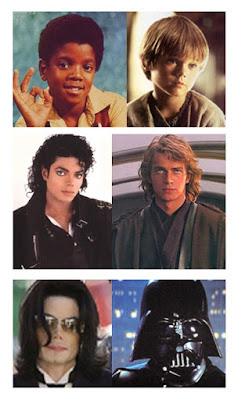