Pumpkin smashing may be an old Halloween prank, but it's malicious and cruel when it's done to a 92 year old Pasadena woman, who donates many of the giant pumpkins she grows in her front yard to the children's garden at the Huntington Library every October.

Here's more about the story from our local KTLA news tonight.


Posted by Dave Lowe on Friday, August 31, 2012 4 comments:
Email ThisBlogThis!Share to TwitterShare to FacebookShare to Pinterest
Filed under: Halloween 2012

62 Days 'til Halloween: PETCO for Props

I've learned over the years that great props can be found in the most unexpected places. I'm not talking about garage sales and dumpsters, I'm talking about stores you've driven by hundreds of times but never once thought to look in.

PETCO (or any pet store for that matter) is one such place. Aquarium decorations have come a long way since those tiny bubbling deep sea divers and treasure chests. Here are some cool ones I just saw that are great for Halloween. They're not the cheapest things in the world, but the sculpt and paint on them are fantastic. And if incorporated into a lawn display, since made for underwater use, you know they'll hold up well outdoors year after year. Any one of these alone are great additions to a curiosity cabinet. 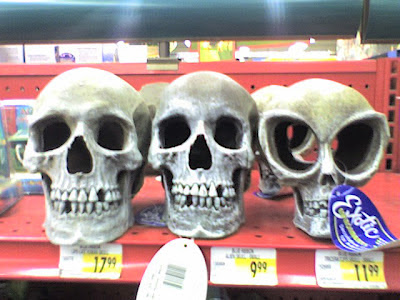 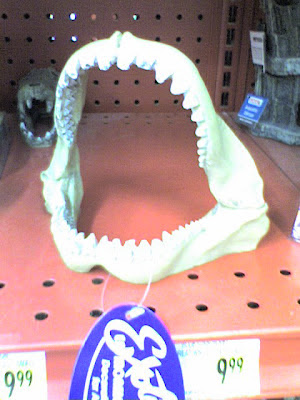 They also have rigid plastic grass tufts and plants, great for tombstone base detailing etc. that would last for more than a few years. 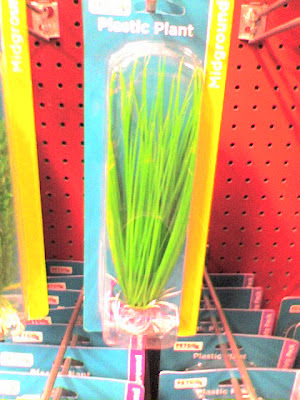 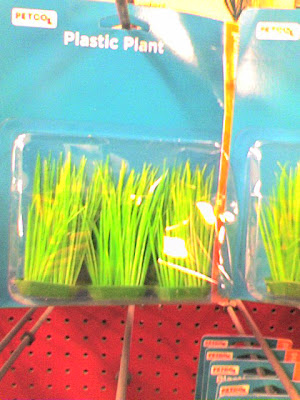 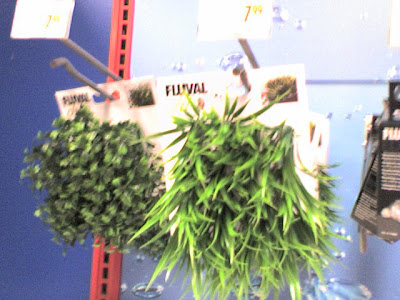 I was surprised to discover a whole aisle full Halloween themed pet toys. Made me smile. 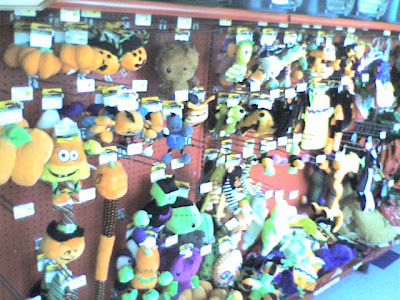 Posted by Dave Lowe on Thursday, August 30, 2012 3 comments:
Email ThisBlogThis!Share to TwitterShare to FacebookShare to Pinterest
Filed under: Halloween 2012, Props

This weekend, niece Devin and I discovered our local Party City store is beginning to look a lot like Halloween. 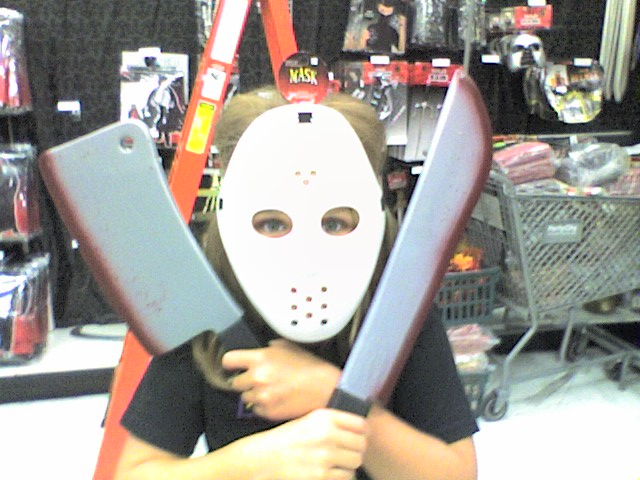 Below is the current layout sketch for my 2012 Halloween display. I know it looks like an incoherent mess of penciled lines that Robert Langdon would give up trying to decipher, but it makes sense to me. It's my front yard as if seen hovering above. I've been drawing, erasing, and redrawing, again and again for days now.

I'm hoping to create a much longer and winding path through the display that leads Trick or Treaters to the front porch. We'll see. One thing for sure, I'll run out of erasers long before I stop redrawing and rethinking the plan. 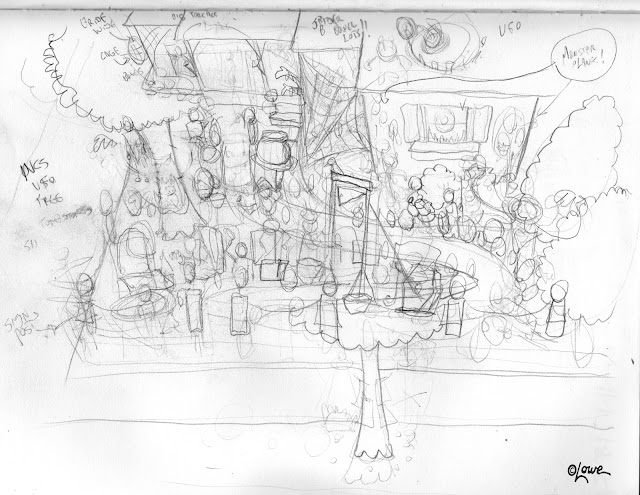 Posted by Dave Lowe on Monday, August 20, 2012 7 comments:
Email ThisBlogThis!Share to TwitterShare to FacebookShare to Pinterest
Filed under: Halloween 2012

Derek Young of Better Haunts and Gardens has very poor Halloween taste. He chose me as the "Haunter of the Month" interview risking his website's reputation. You can read it here.

Posted by Dave Lowe on Saturday, August 18, 2012 3 comments:
Email ThisBlogThis!Share to TwitterShare to FacebookShare to Pinterest
Filed under: Halloween 2012 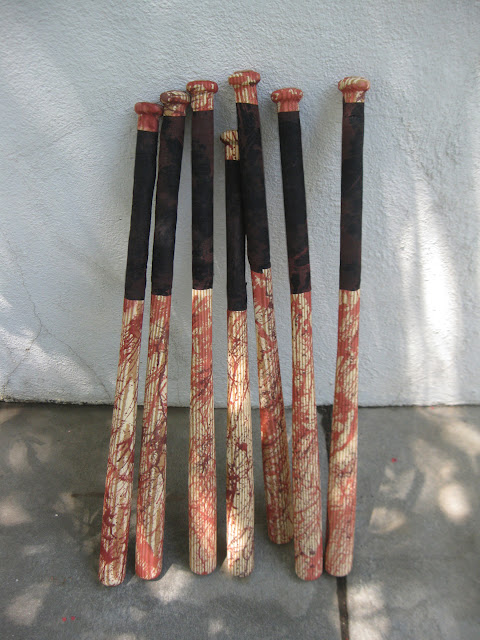 A few weeks back, when I was illustrating the poster for the play GEEKS VS ZOMBIES. The show needed faux baseball bat props for some characters to bash zombies with. Time was short and like most independent small theatre productions, so was the budget. I offered to make them from some kind of inexpensive kid's toy bat.

They had to be realistic looking, standard sized and safe enough to use in stage combat. The show needed at least 6 (4 for the lead actors, and 2 more standing by as back ups). But more if affordable just in case.

Searching for off the shelf T-ball foam bats was a given, but I felt like Goldilocks shopping. Some were too soft, some were too hard, some were too fat, some were too thin, etc., etc. All were also odd colors and would of required faux finishing (not impossible to do, but it would of added extra time to do right).

But then I found one at Cost Plus, which was just right... good foam thickness from end to end and already wood grained. Plus very budget friendly being under $10.00 each, and would only need a few more bucks in materials to make perfect. 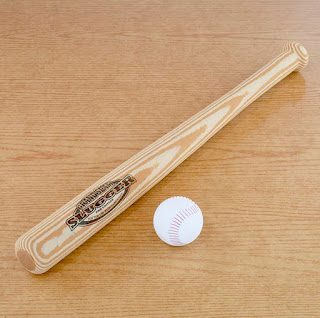 Although the bats were really short (24"), I was easily able to customize and make longer since they only had a hollow plastic tube inside.

Here's how I did it. Quick disclaimer: These were made for the play's particular need and used by actors in rehearsed, choreographed, and controlled fight scenes. If you create a bat like this, I don't claim it to be completely safe enough to freely go around knocking your friends in the head with. Use common sense. 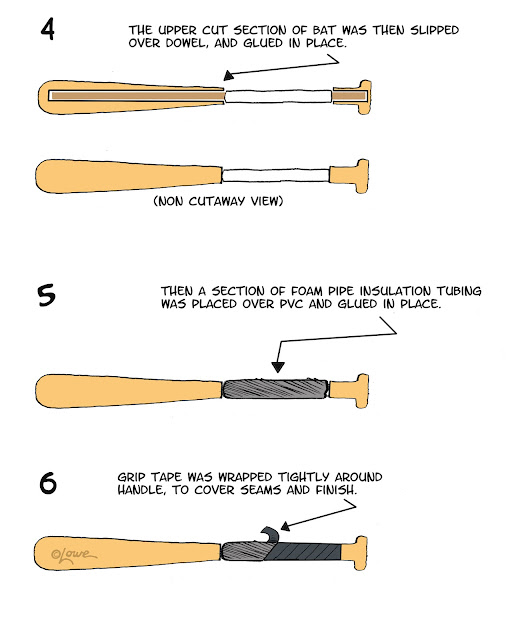 From there, they just needed to be splattered with reddish-brown paint to look well used and blood soaked. Here's a before and after photo. 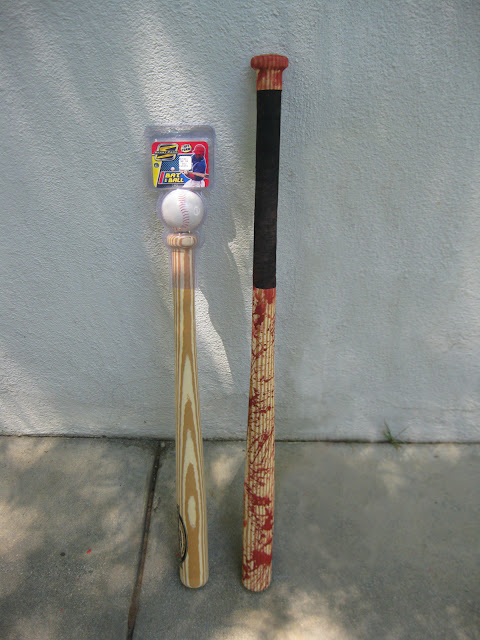 For more info about GEEKS VS ZOMBIES (which opens tonight!) visit Seat Of Your Pants Productions or facebook.com/soypproductions

Posted by Dave Lowe on Thursday, August 16, 2012 3 comments:
Email ThisBlogThis!Share to TwitterShare to FacebookShare to Pinterest
Filed under: Props

Niece Devin's "When The Light Is Forbidden"

A few weeks back, niece Devin and I made an impromptu horror short film together for the fun of it based on her spooky idea. Devin was an iron fisted executive producer supervising everything. The gloomy title of the film? Her idea. The bloody hand prints separating the credits? Her idea. The funny Waddell/Lowe production vanity card at the end featuring her pet bulldog Twinkle? Yep, you guessed it, Devin's idea too.

Terry Gilliam's daughter has started a blog called Discovering Dad about the treasures she's finding in her father's personal archive. Need I say more?
Posted by Dave Lowe on Wednesday, August 08, 2012 No comments:
Email ThisBlogThis!Share to TwitterShare to FacebookShare to Pinterest
Filed under: Creative Inspiration

Whenever it's Olympic season, I always remember an old animated TV special called the Animalympics that first aired sometime around the 1980 games. I fell in love with it back then, and can note it's influence on my drawing, cartooning, and humor now.

I even quote lines from it once in a awhile. "Not bad for a fatso" said in self-deprecating humor is one I often say.

The Animalympics were originally two separate TV specials, the winter games, and the summer games. When released later on VHS, the two specials were edited together as one and is the version most know today.

Thanks to YouTube, here it is below in 8 parts for your enjoyment (but more so mine). If you've never seen before, it's well worth your time. By the way, the "fatso" line I mentioned is in part 3.

Watch in-between London game events. I'm pretty sure anything Ryan Seacrest might report will not be better than this.

Posted by Dave Lowe on Tuesday, August 07, 2012 6 comments:
Email ThisBlogThis!Share to TwitterShare to FacebookShare to Pinterest
Filed under: Creative Inspiration

I'm really looking forward to PARA NORMAN. Especially after seeing this Olympics inspired promo for the movie. My kind of macabre humor.