She loves softball and has advanced to the Encino/Sherman Oaks League All-Star team, and will be playing in tournaments against other San Fernando Valley All-Stars this summer. This past weekend, her team "High Voltage" got off to a good start winning their first tournament (and a trophy half as tall as the players). 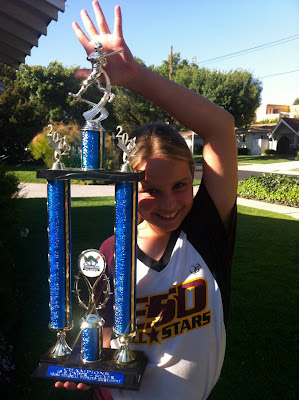 I'm happy and proud to say, I was asked to design and illustrate the team logo.

It's nice to be able to contribute and show my support this way since I can't offer her any useful advice from my sports playing history - unless learning how to trip over your own feet running between bases and fall down flailing your arms in a spastic manner is a valuable skill to her.
Posted by Dave Lowe on Thursday, May 31, 2012 10 comments:
Email ThisBlogThis!Share to TwitterShare to FacebookShare to Pinterest
Filed under: Niece Devin

Indiana Jones and the Temple of Social Media 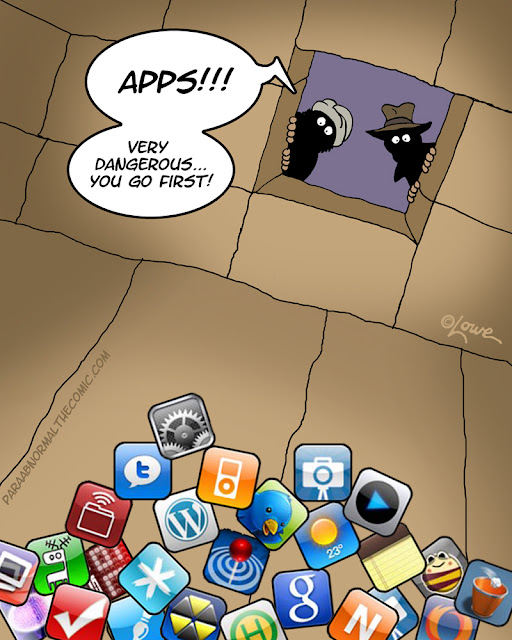 This week's assignment from the League of Extraordinary Bloggers:

I'm going to cheat a little bit on this one. Last year, when I had a month long Raiders of The Lost Ark 30th anniversary blog-a-thon, I did a few cartoons over on Para Abnormal featuring the world of Indiana Jones using Twitter and Facebook. This League assignment gives me a good excuse to post them all here. 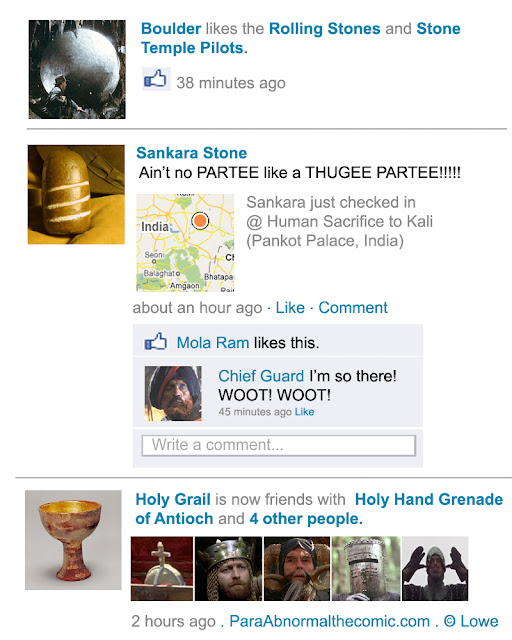 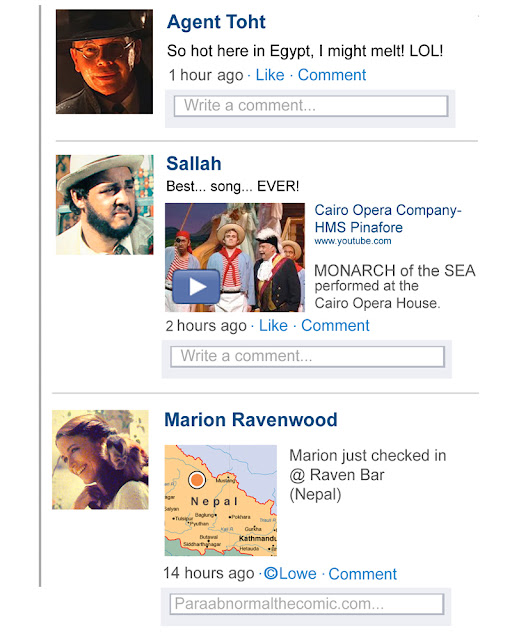 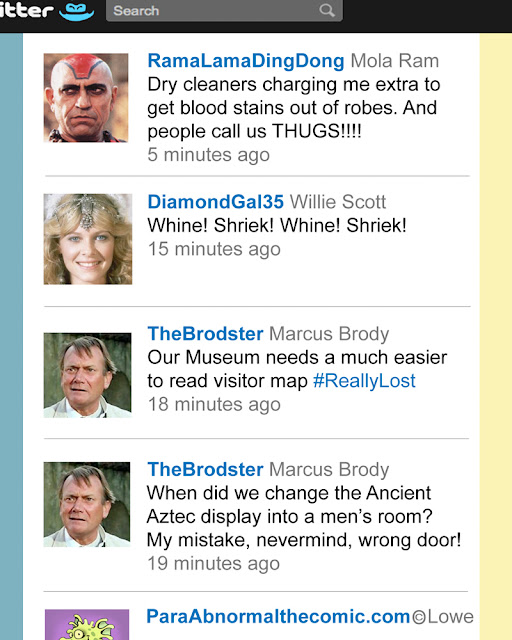 Posted by Dave Lowe on Saturday, May 26, 2012 5 comments:
Email ThisBlogThis!Share to TwitterShare to FacebookShare to Pinterest
Filed under: Indiana Jones, Para Abnormal

I've been a lousy blogger lately. Lots of things taking up my time. One of those things has been the tedious task of sorting old boxes in the workroom hoard. I can't get ahead. For every one I organize, two more appear.

On the upside, I've been finding fun stuff I forgot I had, like these two Polaroids of my early Halloween yard decorating back in 1995. It was my second year after getting bitten by the haunt bug in '94.

What you see is pretty much the whole display. It's funny, I remember thinking it was so over the top and extreme then. Boy, I've come a long way since. 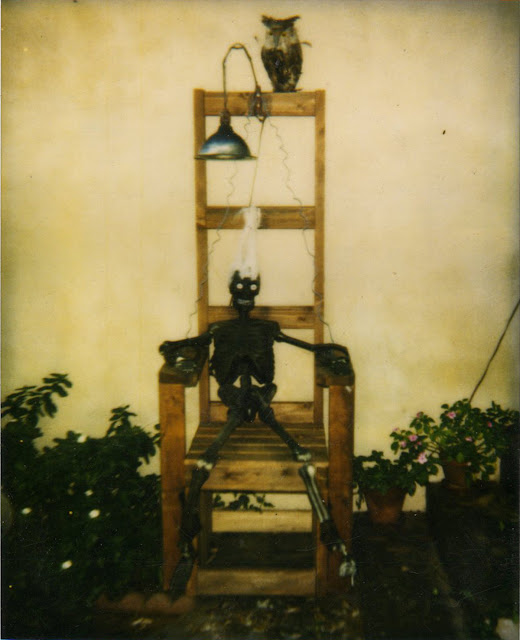 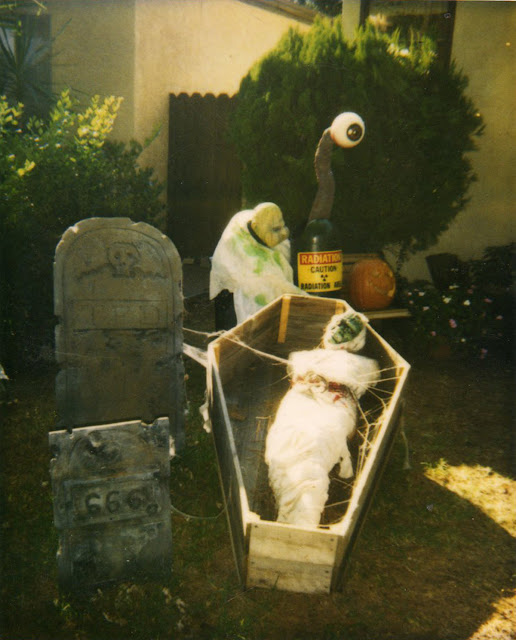 - The electric chair is the one I use in my display today. It and the coffin mummy were dressing created for the SCI FI BUZZ TV show set I designed in the early days of the SYFY Channel. The mummy is also still around, although in countless pieces in the garage somewhere. The coffin is sadly long gone.

- That "charcoaled" blucky skeleton was the first I ever bought (and poorly customized in 20 minutes) His parts have since been repurposed into numerous different zombie creations over the years.

- Yes, I carved those gravestones. And looking at them now... yes, I was probably drunk when I did.

- I found the CAUTION:RADIATION sign at a local hardware store in Burbank. There were right there next to the usual BEWARE OF DOG and FOR SALE signs. Only now do I think about it and wonder if that store had plenty in stock for a reason.

Posted by Dave Lowe on Friday, May 25, 2012 8 comments:
Email ThisBlogThis!Share to TwitterShare to FacebookShare to Pinterest

A few more recent illustrations from the Ashputtel project. 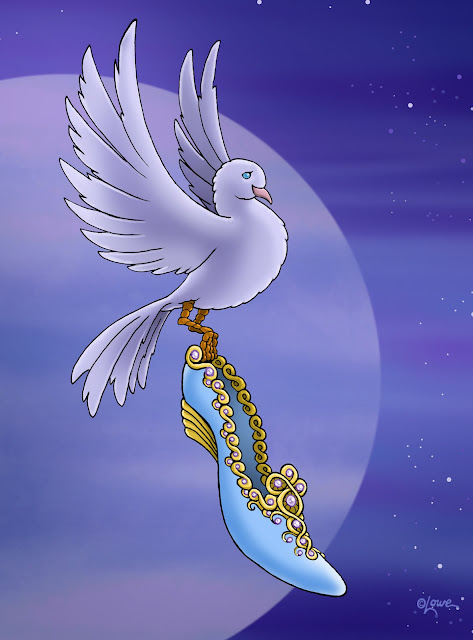 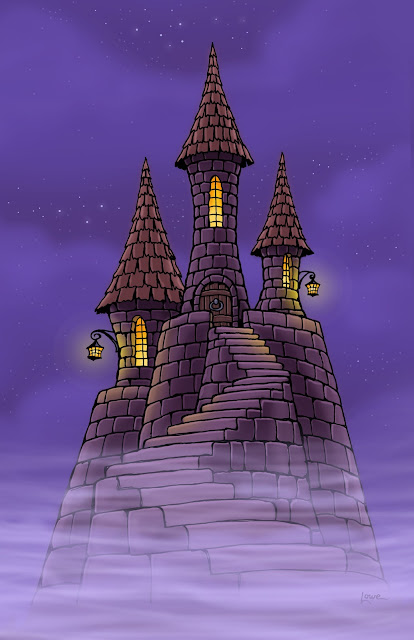 I also created the title logo and an early ad for the show. 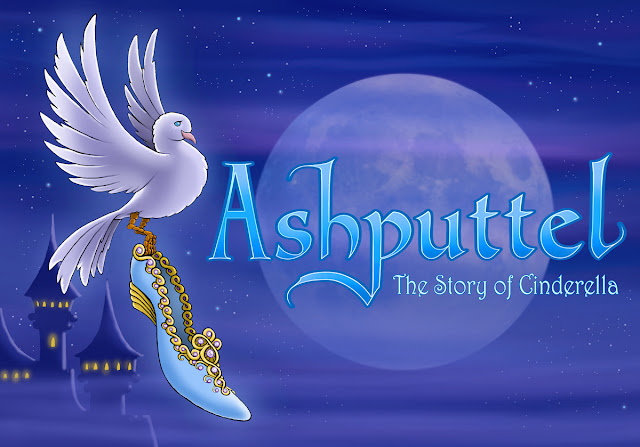 Posted by Dave Lowe on Wednesday, May 16, 2012 2 comments:
Email ThisBlogThis!Share to TwitterShare to FacebookShare to Pinterest

Back in 2005, when I was art director on HGTV's Outer Spaces, the executive producer asked me to help research, easy but impressive looking, decorating projects for a possible Halloween special on the DIY network. That show never happened, but in my web searching I discovered Perfessor Evil's HauntProject.com and was instantly a fan of.

What I enjoyed most was the simple layout that was Pinterest before Pinterest. Photos of great projects to scroll down and look at, each linked to their origin site (and by the way, just celebrated adding it's 1000th project). Perfessor Evil had created a portal to the vast world of Halloween prop makers I never knew existed.

A few years later, I stopped by the site as I often did and was happily surprised to see that not only one of my prop projects had been found and posted, but Para Abnormal was also added to Haunt Project's web comics link page. It made me feel I was now a legit member of the haunting community.

Perfessor Evil was actually Rik Cary. Rik unexpectedly passed away this weekend. He made Halloween decorating even more creative for me as a consistent source of inspiration.

Posted by Dave Lowe on Tuesday, May 15, 2012 6 comments:
Email ThisBlogThis!Share to TwitterShare to FacebookShare to Pinterest
Filed under: Creative Inspiration 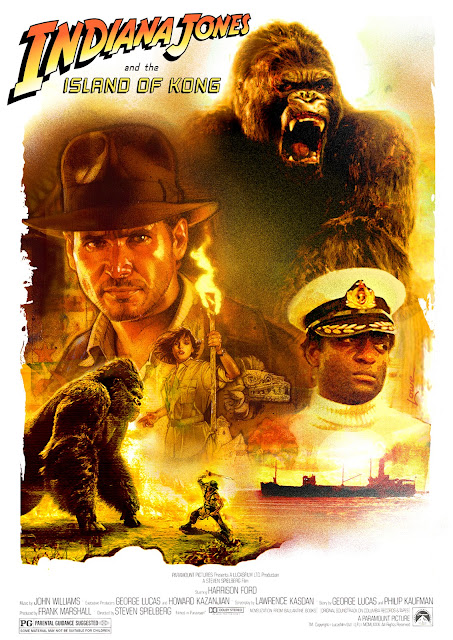 But what if Katanga saying "Dr. Jones, you're exactly how I imagined you to look." is an inside joke between them set up in the Kong adventure? As an underworld pirate, Katanga's running gag might be to always pretend to never remember anyone or know anything, so he always has "plausible deniability".
Posted by Dave Lowe on Sunday, May 13, 2012 4 comments:
Email ThisBlogThis!Share to TwitterShare to FacebookShare to Pinterest

I don't think I've mentioned it yet, but one New Year's resolution was NOT posting about any new Halloween yard ideas for 2012 unless they were well under way being created. I've become fed up with myself having posted a 1001 ideas and sketches in the past that never became reality.

Having said that, I think this new cartoon posted on my web comic Para-Abnormal qualifies as a Halloween idea I'm safe to share for next October. I've already pulled materials from the garage hoard and started making. 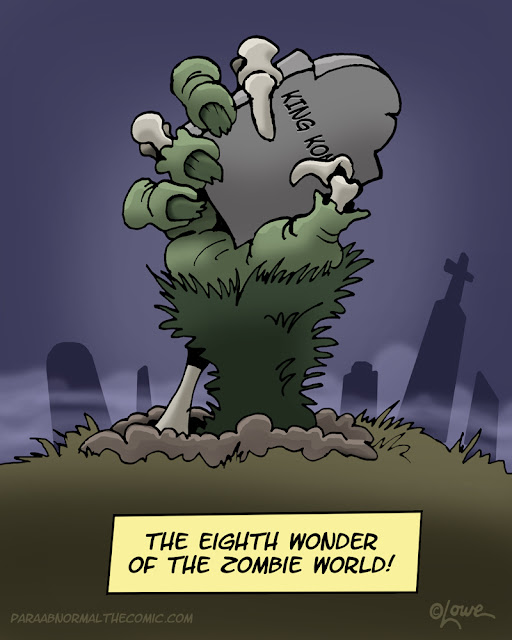 As of right now, this prop seems possible to make with what I have. But I reserve the right to abandon at any time and exclaim "What a stupid idea!" should I find myself debating whether to spend money on or buy food.
Posted by Dave Lowe on Monday, May 07, 2012 2 comments:
Email ThisBlogThis!Share to TwitterShare to FacebookShare to Pinterest
Filed under: Halloween 2012, Props

The Asputtel project is coming along. Here are two variations of the hazel tree with her mother's grave - one day scene, one night scene. 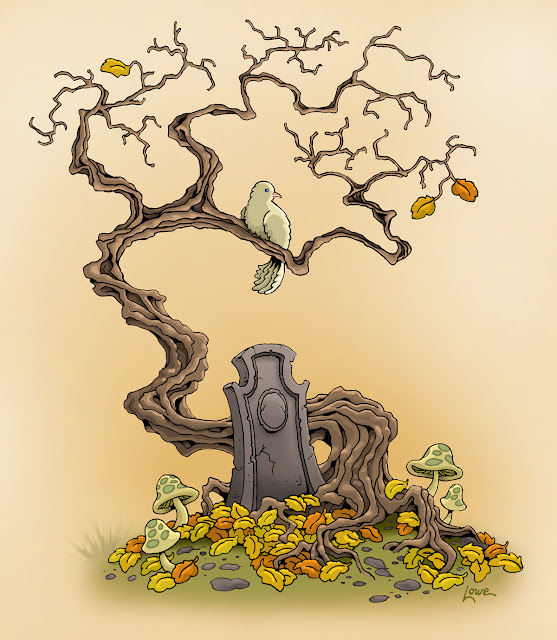 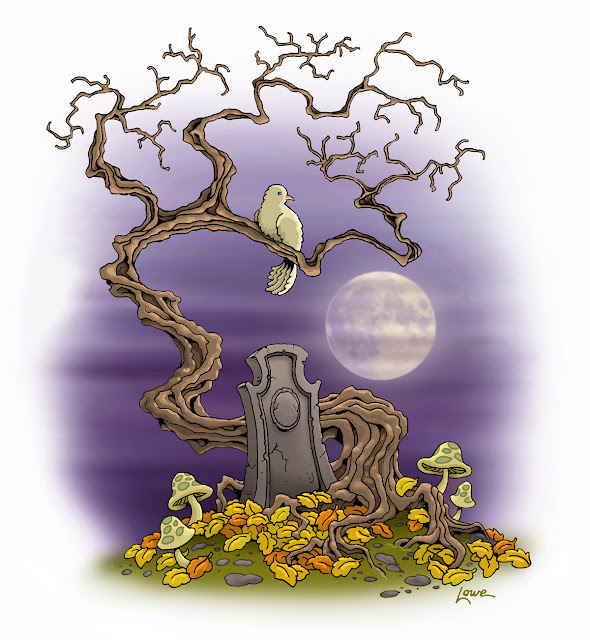 Posted by Dave Lowe on Saturday, May 05, 2012 2 comments:
Email ThisBlogThis!Share to TwitterShare to FacebookShare to Pinterest
Filed under: Illustration

A few days ago, more than two weeks since I planted them, the pumpkin seeds had yet to sprout. I looked at the packet to double check the germination time when I discovered something awful - they were dated 11/09!

That explained it, they were dried up and dead. I should of known better than to use seeds found on a shelf in my garage hoard. I knew they were old, but did not think THAT old.

I gave up on them and decided to try again after picking up fresh seeds later this weekend. 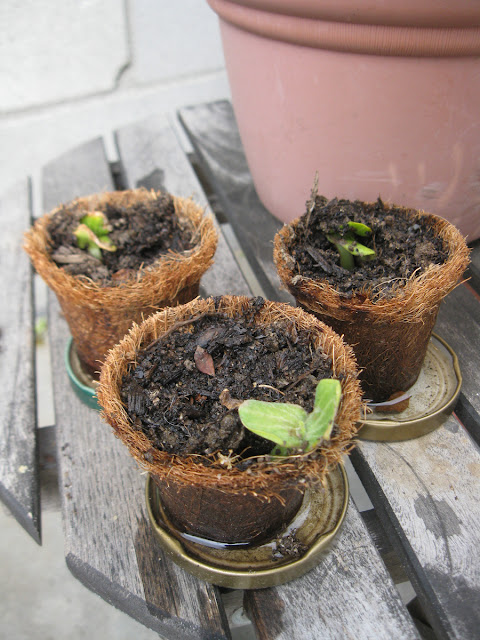