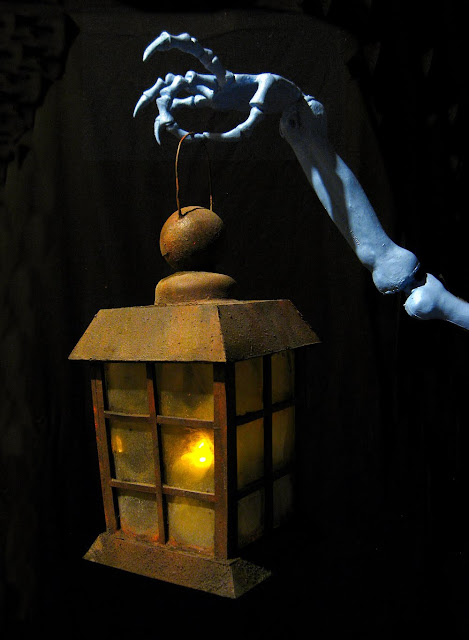 And so the foamcore lantern trilogy of posts comes to an end. I'm really happy, even all painted and finished, it still weighs next to nothing so O'Treaty's bony zombie fingers can hold it. I changed the cage design since Part One thinning the support bars and went from 4 panels per side to 6. The decorative top is just an overturned plastic champagne glass with the stem cut off and a hollow paper mache craft ornament from Michael's glued on it. Since it's just a foamcore prop, I wanted to make sure it holds up to the elements (at least for this year) so I gave it three thick base coats of black Decoart Patio Paint acrylic. It's made for crafting up outdoor items like terra cotta pots and concrete. I had some so I thought I'd try it, not that any other acrylic or exterior house paint wouldn't work. 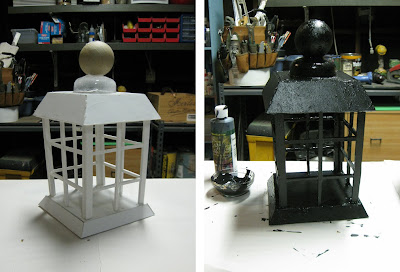 The glass is old clear plastic portfolio sleeves cut to size. One cage side is removable to turn the fake candle inside on/off and change batteries if needed. I filled in some unwanted seams with Spackle and faux rust painted. While doing so, I threw old coffee grounds on it for some gritty texture. The glass was grimed up by splattering dirty brush wash water. Then I cleaned each panel a little leaving muddy around the edges. Once dry it got a light coating of spray glue and dusted with dirt using a flour sifter. The handle is just a piece of bent wire hanger. 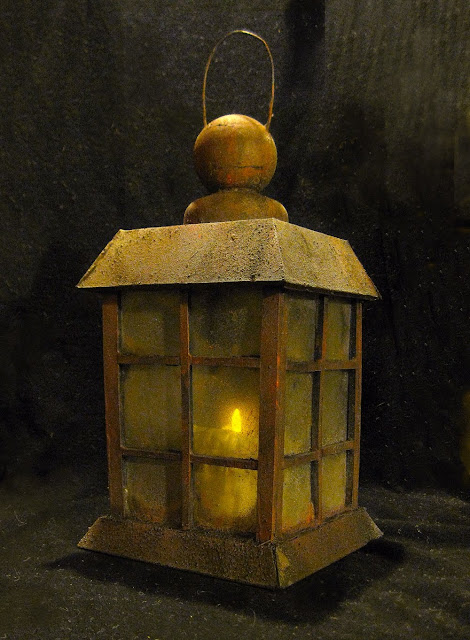 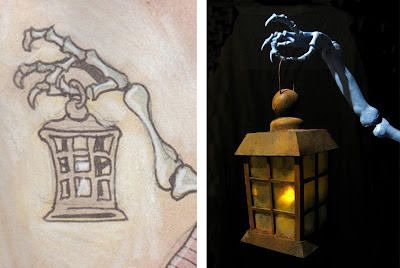 Most of the aforementioned wire hanger was used to create the hook to hang the lantern from, disguised as Patrick O'Treaty's finger. The wire was glued into his forearm. The Model Magic made hand, without the middle finger, was skewered through so that wire becomes the missing finger. 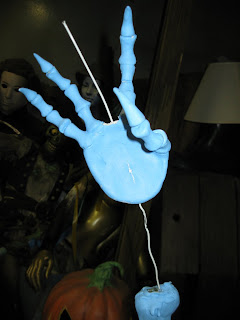 I positioned the hand where I wanted it and glued it to the wrist. 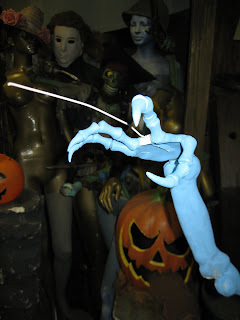 The finger bones were then threaded onto the wire, except for the tip and bent into a pose that would create the illusion the middle finger and thumb were holding the lantern. 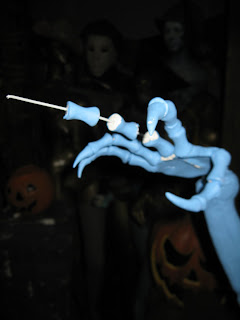 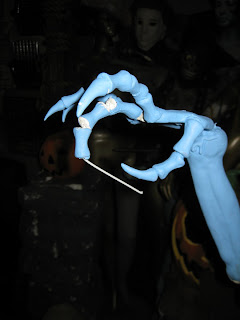 The wire end was cut down to length, curved a bit more to hook the lantern handle and sculpted the finger's bony last digit over it with model magic. 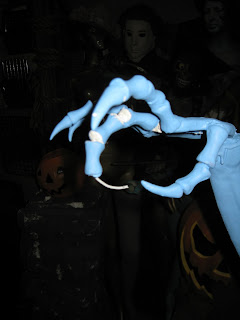 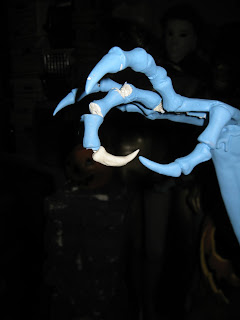 Posted by Dave Lowe on Friday, September 10, 2010
Email ThisBlogThis!Share to TwitterShare to FacebookShare to Pinterest
Filed under: Halloween '10