I realized today, it's been almost two months since I last posted about the pumpkin patch. And sadly this might be the final update. Back in early July it was lush end to end with growing vines. There were numerous buds then that seemed to have potential but only one grew into a pumpkin - a little guy I first called Jack, but have affectionately renamed Linus. 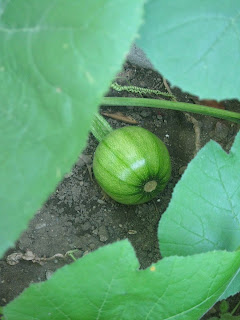 By early August, all the vines lost steam and stopped growing. Just when I thought Linus was all alone as in the Great Pumpkin story, to my surprise I discovered he had a friend hidden under a large grouping of leaves and off-shoot vines. I've named her Sally.

Today, the entire patch is spent and naturally withering. It would be a Halloween miracle if any more pumpkins appear. Linus is looking ready to harvest and Sally is catching up turning orange.

Although both are really small, they will find a place of honor sitting together as our coffee table centerpiece this October. 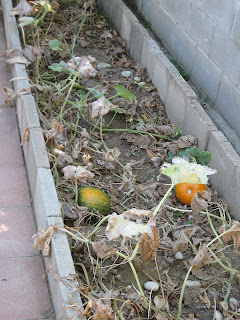 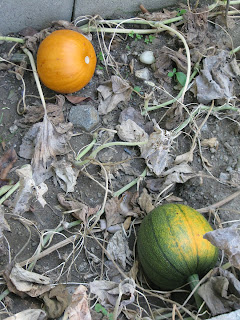 Posted by Dave Lowe on Thursday, August 25, 2011
Email ThisBlogThis!Share to TwitterShare to FacebookShare to Pinterest
Filed under: Halloween 2011, Pumpkin Watch 2011