When we last left off in creating Grool the zombie's cauldron, the stone fire pit was finished. Now it was time to make the faux fire itself. But there's been some trial and error so far.

From the start I wanted it simple to make, not too high tech with X-mas lights and a bit over the top... but still fairly real looking. Most important it had to work within my annual "no budget" Halloween decorating budget.

The first version I made was okay and worked. I started by gluing on wrinkled tin-foil inside the pit to help reflect light, plus if seen would look like hot embers (actually an old Disneyland Imagineering trick). Then I attached a bucket wrapped in tin-foil to the center as a support for the cauldron (being hollow also allowed me to thread a light socket through for the cauldron's internal glow later). I surrounded the bucket with orange x-mas lights and placed a hood made from chicken wire around it. Over that I glued on a large piece of crumpled vellum and painted black. 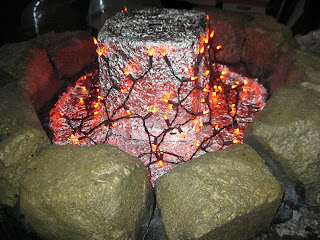 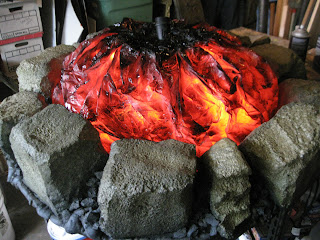 I decided to rethink it. It didn't look the way I saw it in my mind's eye and didn't allow me easy access to the lights should I need to change a bulb or fuse. Also, being paper, it was flimsy and dangerous.

I stepped away from it for a day or so to ponder a new approach. I must of psychically put my need into the metaphysical creative ether because then, one of my favorite blogs Lost in Schlock posted a link to a great how-to called Glowing Hot Coals and literally mentioned it was the perfect thing for my cauldron project. And It was.

That project found on Halloweentforum.com by LT SCARE lead me to the original clever how-to that inspired it called Goldie's Bubbling Halloween Cauldron posted by Woodhegm on Instructables.com.
Both creations had exactly the look I wanted and used materials I was already working with. So my faux fire now is an amalgam of the two with a few changes that fit my needs.

I stripped away my first attempt but left the tin-foil base. 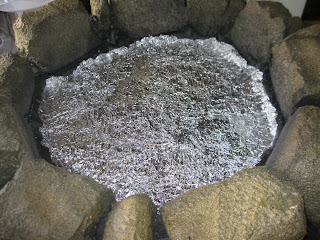 Both the glowing coal projects use expanding foam to create the coal mounds. Since I already had some foam blobs painted to look like ashy embers between the stones (from gluing in place), it's a great way to go and keeps the look throughout the prop.

In those projects though, the lights are permanently buried under the foam. I still want access to mine, so I'm keeping the hood over the lights concept, but making it so it's really solid and removable. I had the perfect thing for this. Years ago I acquired several large 18" plastic domes online from Barnard Ltd (which BTW is a great place to find odd decorating materials). 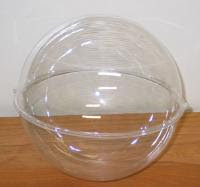 They've been that kind of precious thing in the material stash that you're afraid to waste on just any project and end up holding onto forever never using them. I'm finally, sort of, letting go and actually used one for a re-do of my old window monster eye prop last year. And now one will be the faux fire base.

I placed the dome in the center of my pit and used a heat gun to warp and melt it into a coal mound-ish shape. I did end up wasting a couple of domes melting them too much (it broke my heart). 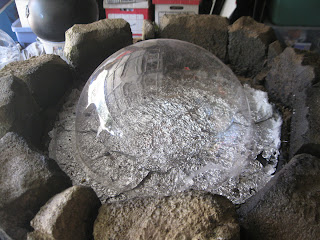 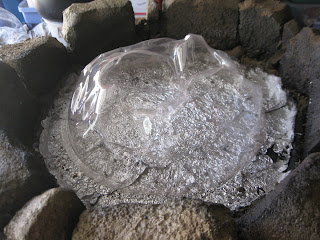 Next I wanted to create a base to raise the dome up on. I traced it's shape and built up a ring of expanding foam in layers. 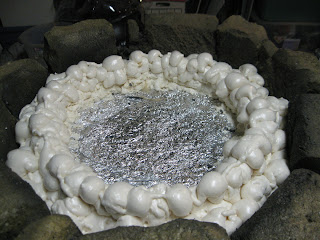 I wanted the dome to sit on top cleanly without gaps, so once dry I masked the ring in tin-foil contouring all the bumps. Then placed the dome on top and foamed it's bottom edges and added some all over it for more texture. 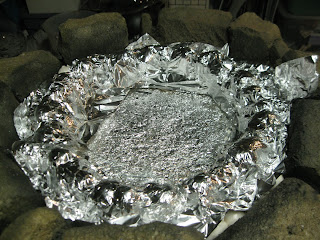 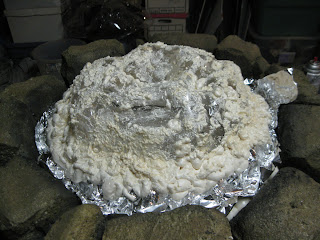 Once that dried, I peeled off the tin-foil and now I had a perfect removable top that fits snugly on the base to access the lights. 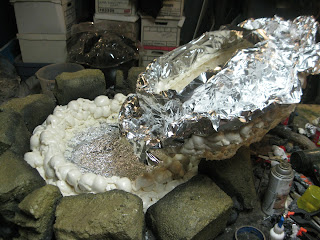 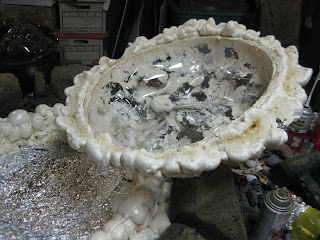 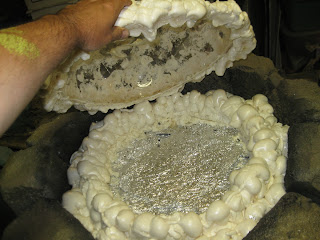 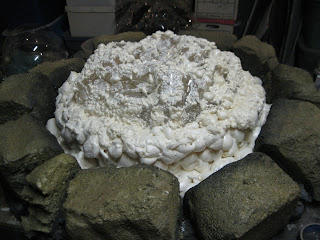 It's getting there. Next in Part Three I'll sculpt the foam a bit, poke some heat venting holes, paint, detail and add the lights! 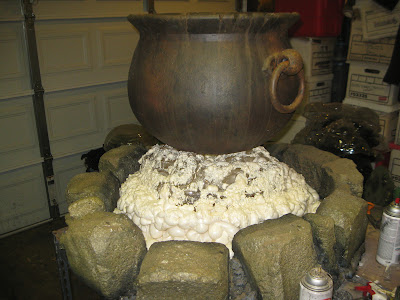 Posted by Dave Lowe on Wednesday, August 31, 2011
Email ThisBlogThis!Share to TwitterShare to FacebookShare to Pinterest
Filed under: Halloween 2011, Props, Zombie a Month