My niece Devin was only 3 or 4 when she made her first visit to Disneyland several years ago. Although she might of been a bit too young to fully appreciate and remember the experience, it was a big milestone and family event. I marked the occasion buying a souvenir Indiana Jones fedora for myself in Adventureland. It's been a decoration hanging in my workroom ever since.

It's an okay hat, somewhere between cheapo costume and one of real quality. What always gnawed at me though, outside of being brown and a fedora, was it never really looked like Indy's. I thought it time to change that. The goal was to reshape it into the distinct Jones' style and weather it so it looks like it has some mileage.


Now, I'm no hat maker. I'm not trying to make a perfect movie replica here or something to survive wear around town for years. I'm just making a prop for display. I do not recommend following what I did on any chapeau of value. Click on images to enlarge. 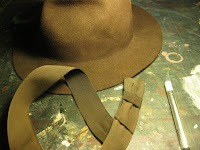 1) I removed the hat ribbon with an X-Acto cutting the small stitches holding it in place. I also removed the interior head band.

2) I wanted to make the crown a little bit higher like Indy's. This requires stretching it. Easy to do being ordinary wool felt. I placed the hat in a basin of warm water to soak for an hour or so. In the meantime I needed a hat block to reshape it on. It just so happened an ice bucket and glass bowl taped together was the perfect size as a makeshift one. 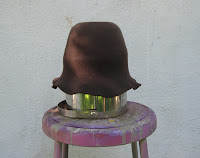 3) I took the soaking wet hat and pulled down over the block. I tugged and stretched all the way around gaining some extra height and warping the crown into a nice round shape above the brim. 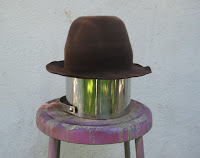 4) As the felt began to dry, I then worked on the brim. I made it flat to start and stretched it out as well, so as not to loose width making the crown higher. Don't want a pork pie hat.

5) Next I started giving the brim some character, curling the edges. 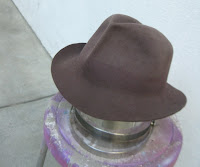 6) While still damp, but dry enough to hold it's shape, I pulled the hat off the block to give the crown it's distinctive Indy touches. I remade the top with a center indent like the movie version (as opposed to the original flat and wide tear drop shape it had). Then added a real tight pinch to the top front. 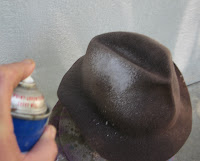 7) Although the felt stiffens up pretty good just drying, I wanted the hat to be as solid as possible, so I soaked it with spray-on laundry starch and rubbed in.

8) While still damp after starching, I added a bit more character to the overall shape by pulling the sides underneath into a tighter oval with tape while drying. This gives the crown the illusion of looking higher than it really is. 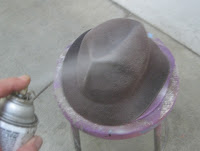 9) Once completely dry, I aged it some. Nothing fancy here. First, a coat of spray glue. 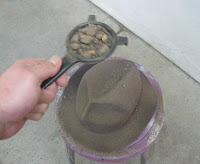 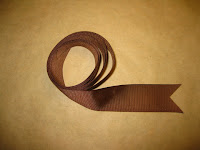 10) Then using a small sifter I shook dirt all over it. Once the glue dried I knocked off the excess and any obviously larger dirt chunks. 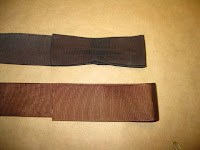 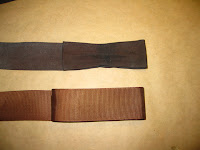 11) Time for fixing up the hat ribbon. I thought the original bow looked too flat. Plus the whole thing had a few scars from the stitching. I decided to make a new one using a ribbon similar in size and color from my stash. I think it came from some old gift box. Hoarding pays off again.


12) Using the original as a guide, I folded one end back over on itself.

13) Then it was folded over once more. 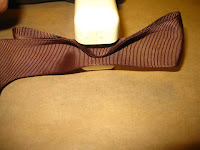 14) To create the pinch, I folded it in half and simply stapled the edge on center. 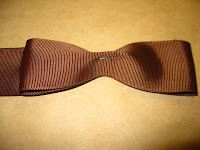 15) Now to cover the visible staple. 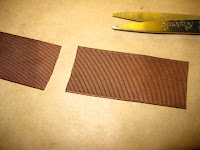 16) I cut a piece off the other end (being sure I still had enough ribbon to go all the way around the crown). 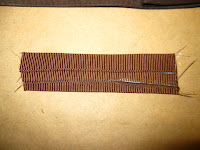 17) I folded over the edges and glued in place with Fabri-Tac (good stuff, I highly recommend to have in any prop maker's kit). 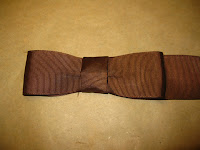 18) Then wrapped and glued the piece around pinch and visible staple. 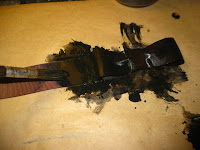 19) In the movies, the ribbon often seems to look darker than the hat. I like that look, so while may not be film accurate, I gave the ribbon a wash of watered down black acrylic to increase it's contrast. 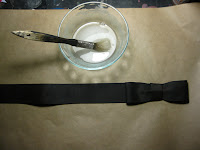 20) The washy black ages it some, but I wanted sweat stains along it to look even more like the movies and feel well worn. Using ordinary table salt dissolved in hot water, I made a solution to brush on. 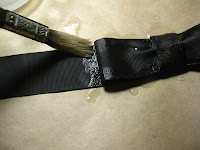 21) I painted it along the edges of band and creases in the bow. Although not immediately visible, a little goes a long way here. Any undissolved salt bits discovered can be easily brushed off after drying. 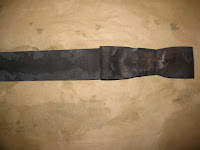 22) Once dry the salt stains appear. I added a bit more as needed here and there. 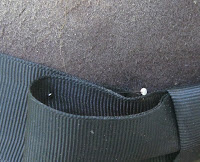 23)  I carefully started wrapping the ribbon around the crown, spot gluing as I went and pinning to hold in place until the glue set up.
Finally, I went back and forth dusting on more dirt, scuffing up here and there with a wire brush and even adding on more salt solution around the brim and crown for extra character. In the end, no, not the perfect replica Indiana Jones fedora, but I think looks a bit better than it's original form and more believable as the one our adventurer archaeologist wore. 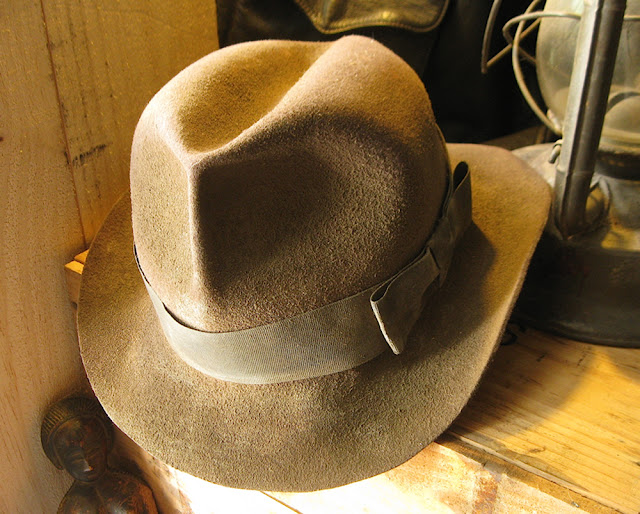 Posted by Dave Lowe on Tuesday, July 05, 2011
Email ThisBlogThis!Share to TwitterShare to FacebookShare to Pinterest
Filed under: How to's, Indiana Jones, Props