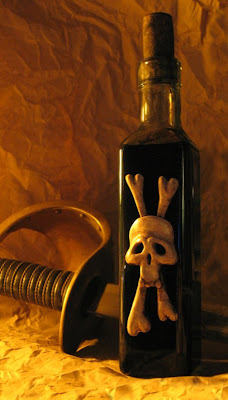 "He reeled, put his hand to his throat, stood swaying for a moment, and then, with a peculiar sound, fell from his whole height face foremost to the floor" - Treasure Island
It's been awhile since I've added to my collection of dark potions and mysterious concoctions for the Halloween dining table display. I thought I'd make something I imagined as a kid that pirates must have kept handy.
Actually, It's a prop incarnation of a misunderstanding I had about the "black spot" from watching the old 1950 Disney Treasure Island. In the story, the black spot is literally a black spot drawn on a scrap of paper. It's a note given to any unfortunate pirate informing him his fellow scallywags have decided to bump him off.

The quote above is from the book when one character croaks from fear alone just receiving one. Watching that scene in the movie, my ten year old self thought the spot was drawn with poisoned ink and that's why he fell over dead. My imagination then took it further and I assumed that's also why a skull and crossbones had become the symbol for poison.

I knocked this out really fast, just another "craft doodle" fueling new ideas. The skull and crossbones are white sculpey on a old bottle from my stash. It's finished with washes of black and brown watercolor. The poison is a little india ink poured inside and swished around. It took a few coats, letting dry in between, until it was opaque. I wanted to keep it hollow should it ever accidentally break. Being black and seen through fairly thick glass, it's hard to tell it's not full of liquid, even up close.
Posted by Dave Lowe on Thursday, June 25, 2009
Email ThisBlogThis!Share to TwitterShare to FacebookShare to Pinterest
Filed under: Cabinet of Curiosities, Halloween '09