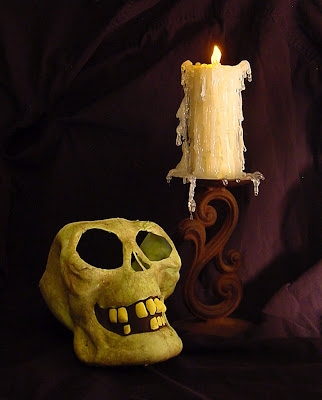 A few Halloweens ago I picked up a bunch of those 1/2" high LED flicking pumpkin tea lights for around .99 cents each. A hard price to pass up. I was excited to actually use them but soon disappointed to find they cast very little light and useless in pumpkins. I liked the flickering effect but little tea lights don't have much Halloween character so I just threw them in a drawer. Trying to make this a zero spending decorating year, I'm using everything in my arsenal. I realized those little lights could be made into larger, creepier, candle props with some personality for next to nothing. Click on images to enlarge.

Basically, I'm creating a taller candle by inserting the light into the top of the tube. The LED has an on/off switch and battery door underneath. I'll want to access these so the light should slip out the top of the tube as needed. The tube is a bit wider than the light so I split it to re wrap tighter. While the tube was open it gave me the chance to create small internal shelves to rest the light on. I marked off the depth using the LED as a template.

I snipped the heads off the matchsticks and white glued them along the depth line. The matchsticks are now the shelves. You can use just about anything for this but that's what I had close by. Overlapping the edges, I glued the tube back together letting it be snug enough to create a solid piece illusion but loose enough to easily lift the light in and out. Don't worry about the seam on the side as it will disappear soon enough.

Then I just painted everything. I used a ivory/antique white color.

Now the fun part! Using the hot glue, I just started dripping glue along the sides. I worked carefully around the top edge trying to keep the socket clean. I started there before being attached to the base so it would be less cumbersome to work on. The glue did manage to drip inside in spots no matter how careful I was. I cleaned mistakes by melting them away with the hot tip of the gun. One long bead/drip easily covered the cardboard seam.

Patience is rewarded using the hot glue here. Creating smaller drips and letting cool before the next allowed me to layer it up creating character. Too much actually re melts any drips already made.

Overall, I think it's a pretty cool prop for .99 cents and a few glue sticks. I going to make various ones with taller paper towel and fatter shipping tubes. I've "punched up" other store bought larger faux candles with hot glue as well in the past.
Posted by Dave Lowe on Monday, September 29, 2008
Email ThisBlogThis!Share to TwitterShare to FacebookShare to Pinterest
Filed under: Halloween '08, How to's, Props