Here's another tale from my Sci Fi Channel set design days in the 90's. Star Trek: Voyager was soon to premiere. Dick Crew Productions needed a simple set for a promotional making of special called " The Launch of Star Trek Voyager hosted by Majel Barrett Roddenberry ".

I'll bet even the most die hard Trekkie doesn't know the special was a do-over. It was originally hosted by Marina Sirtis. Because of some giant corporate franchise legal stuff that I was not privy to, Ms. Sirtis' segments went unused and was re-shot with Mrs. Roddenberry.

Like all the Sci Fi Channel sets I did, it was another fun project for a fanboy. I loved original Trek and was a real Next Generation junkie. I 'll admit it... I also had a trekkie crush on Deanna Troy.

I designed the set from the start to be simple for aesthetics and the usual tiny budget. It was far from the most original of ideas and was actually the biggest visual cliche' of all possible Star Trek environments... outer space. 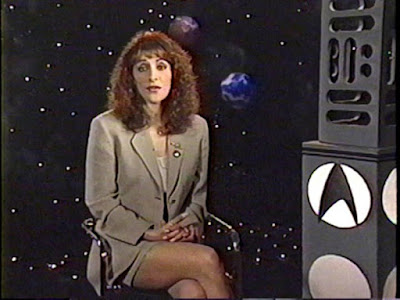 I won't bore you with how the set was created. I think my TV design inexperience at the time is obvious. Painted dodgeballs for planets and cobbled together set pieces borrowed from other sets are stories told often on this blog.

One interesting memory was during a segment using props. She held up ordinary Star Trek action figures and books talking about the merchandising of the franchise. After the take she made a immediate beeline for me and gave them back as if they were burning her hands. I thought it was a little quirky but didn't give it much thought then. I did hear a story just last year which might explain it.

Back when the show was in production, Paramount learned of the huge and lucrative collector's market for any and all original Star Trek props. They were seeing the most insignificant of things, even trashed items, being sold at auction. In fear of internal theft, the prop people became more like security guards. The actors made of habit of handing back props to them quickly so none went missing, even in brief moments between takes. True story? I don't know?

I'll post pictures of the Roddenberry version once I dig up the tape. Sorry that the pictures above are just screen grabs, but I was lucky to get them. I never had a copy of the Sirtis version and camera man Piers Bath was kind enough to e-mail me these just recently.
Posted by Dave Lowe on Wednesday, August 06, 2008
Email ThisBlogThis!Share to TwitterShare to FacebookShare to Pinterest
Filed under: Sci Fi Channel