This is part 2 about my 3 set designs for the Sci Fi Channel series: SCI FI BUZZ. I wrote about the first version here.

After one season, Sci Fi Buzz had gained an audience and was renewed for 1993. Having been filmed in the production company's office, it was often hoped to move to a real studio space one day. Piers Bath, the show's cameraman and lighting designer pitched the idea to the "powers that be" that it could be filmed in a often unused space at the "camera for hire" company he worked for. Things fell into place and a new set was born.

The new space was small, but not hard to work in being equal in size to the original office space (if not a little bigger). The best part was designing from scratch and not having to reassemble a working office after filming.

I loosely came up with an idea that would use the cubicle layout already established but upgraded to look like an orbiting Sci Fi news space station. As slick and impressive as anything Kirk or Picard ever commanded. 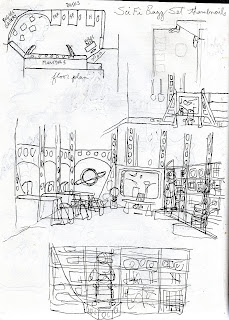 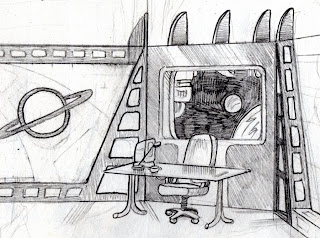 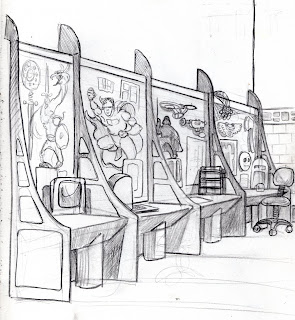 I threw that idea out the window. Who was I kidding? I was still a set design rookie. I knew so little then although I had past TV experience and just started working on ABC's Home Show in the art department. Having designed the first Sci Fi Buzz set gave me confidence but I knew my limitations in those days. I wasn't afraid to challenge myself but I revised the concept to be a homage of 1950's b-movies with cheap sets and props. I hoped the Ed Wood feel would maximize the budget and reinforce the fun of the show. The irony is... It took all the money, sweat and time just to make it look as it did, far less by intentional design. 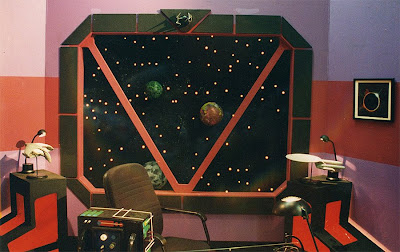 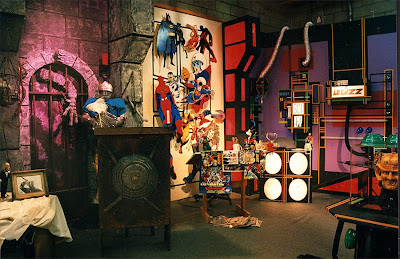 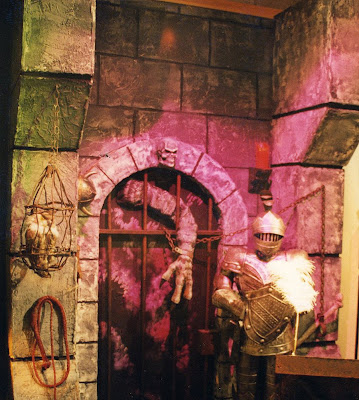 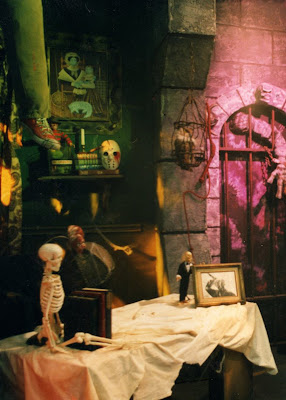 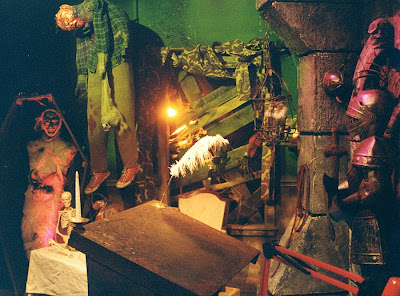 Horror area as seen sitting in the comic book area.

As silly and cheesy as the set was, it's one of my favorites with great memories. We just dove in creating stuff. The "powers that be" were happy to have a new set and never micro managed, trusting us. Of course, I can look back now and know how I could of done this or that better. There was great discovery making this set. One of the few projects I've done were I could just play with ideas. It also showed me the joy of transforming found objects into stuff. Which is still a creative passion for me. I could use most of this blog's memory writing about all the small decor details. Each has a story behind it. I can't say that about many of the sets I've designed since. Carpenter Greg Holliman built the walls and columns by himself in his garage. As they were finished, he delivered to my backyard for painting so he had room to make more. Thankfully we lived close to each other and this process seemed normal to us then. 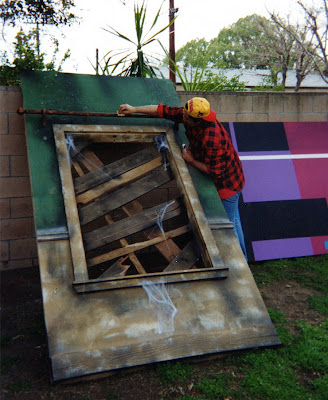 My sister Megan needed extra work in those days so I hired her to help paint while I shopped for set dressing and custom made stuff. Now she's a big success with her own company.

This photo documents the last time I was able to order her around... 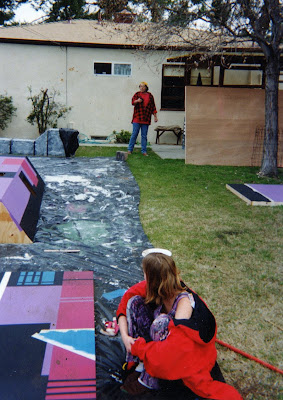 A small epilogue: The new place we taped the show at was once known as BPS: Broadcast Production Services. Years since, they expanded into the building next door with 2 sound stages for rent. They are now known as BPS: Burbank Production Studios. Carpenter Greg was hired to help design and build the first sound stage when they expanded. I'd like to think Sci FI Buzz helped in BPS's evolution.
Posted by Dave Lowe on Monday, July 07, 2008
Email ThisBlogThis!Share to TwitterShare to FacebookShare to Pinterest
Filed under: Sci Fi Channel