There were 3 incarnations of the SCI FI BUZZ set I designed in the years it was on the air. . This is part 1.

In 1992, my first real TV job (beyond being a production assistant) was as the production coordinator for the last season of Nickelodeon's original WILD AND CRAZY KIDS. I was basically the head production assistant and responsible for all the other P.A.'s on staff. We were needed to make real and practical all the games the producer's came up with. Looking back, I was actually the art director and all the P.A.'s were prop people but I didn't know any better then. We should of been payed art dept. wages...but TV work was fairly new to me and I had no thoughts of a career in it.

I should of saw the future when I wanted filming to wait on a game till all 10 red balloons filled with whip cream where the same size.

That season's director Dave Garrison called me a few weeks after it was over. He was producing and directing for a unknown cable network called SCI FI Channel. He wondered if I wanted to design the set for a weekly "entertainment tonight" styled show about all things science fiction.

Of course I said yes. I then talked with executive producer, Dick Crew about details and dove head first into the project. I soon realized with no set design experience...I had no idea of what I was doing.

Thankfully, I had become good friends with, Gregg Holliman, a P.A. from Wild and Crazy kids. Greg was the "go to" guy for any building or carpentry on that show. He had experience working in many scenic shops around town. Greg said to me...

"Designing a set is no different than drawing a picture of a room or someplace from your imagination. You just have to build it and I can build anything you think up "

Hearing those words opened a new world for me. SCI FI BUZZ became the first TV set I ever designed.

The first SCI FI BUZZ season was to be filmed in the Dick Crew production office. It was hoped to look like a busy office full of people in cubicles focused on all things sci fi . We would film 4 episodes on a Saturday or Sunday once a month. Staff members were to be on camera as extras.

I had to transform a boring production office, that looked drab...into a cool space that seemed to be a "sci fi headquarters". The real challenge was not completely re-designing the office as people had to work there on Monday. It had to be something easy to set up, strike and store quickly once a month. Adding sci fi posters and props to the cubicles was obvious but it needed more.

The solution was creating a home base for host Mike Jerrick as the sci fi buzz team leader (and not just a talking head). I came up with a design that used 3 pre existing black shelf units in the office, pushed together, bookended by two internally lit pieces built by Greg. 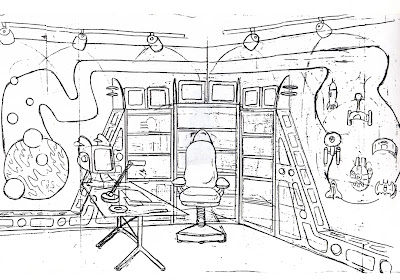 I added a large Sci Fi channel "Saturn" logo made from foam core. The other stuff was furniture around the office. I'm proud of the design, it was fun and sold the show's theme. It was just "over the top" and still worked in the overall office space. 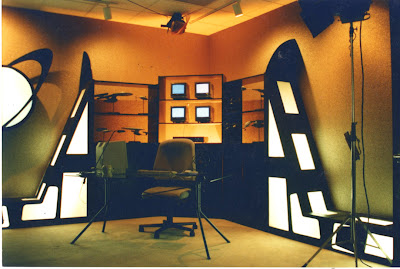 I loved working on this show! Not only as a Sci Fi fan but as a wonderful way to begin a future history in TV art direction. It spoiled me. Each month I'd have to make some fun props based on one or two of the show's segments. How many people get a call asking...

"Can you make the monolith from 2001: a Space Odyssey for next week?"

Here's a clip from season one I found online about DARK SHADOWS (note that the whole office became the set...even the company office tape storage.)

If you looked quick there was a Indiana Jones tribute. A bullwhip, leather jacket and fedora was on the wall. I'd add things like that from time to time as fun details.

Sci Fi Buzz was a great show because it treated fans with respect. It was the only show about all things in the genre without snide commentary or aside remarks. It was full of self effacing humor, but the words... dork, geek and nerd... were never used. As in this clip I also found online (first season director and producer Dave Garrison is the correspondent).

Mike Jerrick and the crew never made fun of the subject matter either when filming on the set. Everyone was a nostaligic sci fi genre lover at heart. I remember all standing around going..."oooh aahhh" when beloved collector Bob Burns brought the original King Kong to the set one day for a segment about it. The executive producer had to be the bad guy and demand all to focus and get back to filming the show.

Everyone working on SCI FI BUZZ made a show they wanted to watch as fans.

Greg Holliman taught me a designer is nothing without a good team or carpenter. They are often the one's forgotten as someone else gets the credit. Greg made many a crazy idea I had real and practical for years after. Life happens and we've drifted apart. We see each other now and again around town and catch up. I always run into him at some hardware store. Ironic, as the places we spent the most time when working together.

The SCI FI BUZZ set grew bigger in time over the next few seasons. For part 2, click here.
Posted by Dave Lowe on Thursday, December 13, 2007
Email ThisBlogThis!Share to TwitterShare to FacebookShare to Pinterest
Filed under: Sci Fi Channel