We had a brief 5.4 quake yesterday. Sort of a medium sized one based on my time in Los Angeles. The first thought in every one's head..."Is this the BIG ONE?!"

Thankfully, no serious injuries or damage happened anywhere in LA. There was a close call for some of our home decor. I discovered this precarious vignette on a bookcase in the living room... 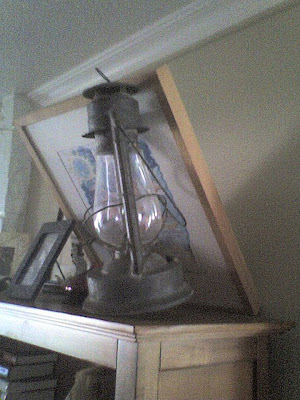 Because of the '94 Northridge quake, I've sort of become a cynical hardened vet. Not unconcerned, just less prone to panic. Back then, I was living in a old apt. building in Hollywood. When it hit at 4:30 am, I was awake putting my shoes on about to head off to work (very early call time). When it started, I expected it to ease up fairly quickly. It didn't, it kept going and got stronger. Bits of plaster started to fall from the ceiling. I literally saw a crack appear and move across the wall like some cartoon. The power went out and I heard everyone in the building yelling and running through halls in hysterics. My roommate and I, grabbed the dog and ran out. I and others tripped over a large pile of dry wall board in the hall that had fallen over, which had been standing up out of the way the day before by workers doing repairs on one of the apts. Once outside there was panic and confusion. It was pitch black except for flashlight beams in the morning fog. It looked like some Spielberg movie or X-Files episode.

Then came the sound of breaking glass and alarm bells ( yea, I know I said the power was out, I don't get it either... battery?). We lived near Sunset Blvd. and many of the local low life's were looting the corner liquor store. I was overcome with a feeling of dread that thing's might escalate even worse. I ran upstairs, locked the apt. door and we jumped in the car headed for my Parent's house in Burbank. This all happened in the first 5 minutes, time really seemed to slow down. The streets and sidewalks of Hollywood were somewhat empty except for occasional groups of people in some state of chaos. Police and Fire engine sirens echoed everywhere. For that brief 10 -15 minutes making our way to Highland ave. and into the valley, it was very surreal, creepy and dramatic feeling. Once at my parents, I called work to say I was going to be late and found out filming was canceled for the day. That's when I learned our experience was not an isolated incident and serious damage was city wide.

Going back to the apt. by the light of day, we were shocked to see the second story we lived on was visibly askew. The landlord, a known bull****er, told everyone that he had his own inspector check it and tried to convince us it was safe just requiring cosmetic repairs. Riiiiiight...no joke, the building looked like this... 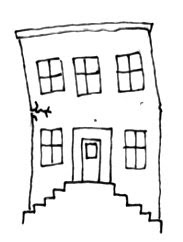 Very few trusted him and calls were made to the City and FEMA for assurance. We cautiously and quickly went upstairs, packed a few things and settled into my parent's house for what we hoped was just a little while. Sure enough, a few days later... a big, bright, official label was stuck to the building front door notifying all it was unsafe to live in. It was deemed safe enough to move our things out although a "enter at own risk" warning was made clear. I never moved faster in my life. There was a lot of stuff we just left behind including the couch as I remember.

So, Mom and Dad got unexpected tenants, along with my Sister and her boyfriend. Their home was also damaged and unlivable. Between all 6 of us in the small house, it also included 5 dogs and 4 cats. It was a crazy, crowded and sort of fun few weeks until we found new places to live.
Posted by Dave Lowe on Wednesday, July 30, 2008
Email ThisBlogThis!Share to TwitterShare to FacebookShare to Pinterest
Filed under: Adventures of Dave