In an 80's music mood from reading other friend's blogs recently. Vickie Howell went and saw Morrisey in concert and Jennifer Perkins is off to see Christopher Cross this weekend. I've got my tickets secured to the Police reunion tour at Dodger Stadium this summer. It will be the second time seeing them since the concert in 1984 I posted about here .

In the college years between '83 and '87, many bands came through town. Some I saw (Chicago, Lou Reed, George Carlin) , most I didn't. One fun night was a group of us going to the Providence Civic Center for Billy Joel on his Innocent Man tour... 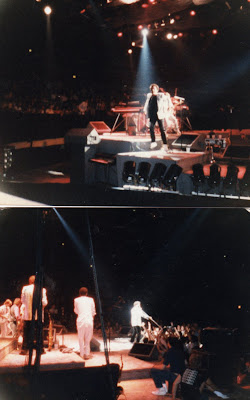 Ok, outside of the Police, you can tell I was not the "hippest cat". The Violent Femmes did come to play on campus though! The school held a "Draw a Violent Femme" contest. The winner got an album (a real old fashioned vinyl one) and tickets to the show. I won! I cartooned a mangled teddy bear with an evil grinned little girl standing over holding a knife behind her back. I was stupid and gave the tickets away.

The biggest tour to hit town was Springsteen's Born in the USA. My friend J.P. and I anxiously waited to hear when tickets would go an sale. Remember, this was before internet, etc. and we got info from FM radio, newpaper or constantly calling the box office. When they finally did, it was during a heavy exam week and my "close" friends kept the news from me. They knew I would blow off studying and taking the tests to go wait on line.

We never got tickets. The night of the show, J.P and I walked down to the Civic Center hoping to find a nice scalper willing to sell 2 seats for the $25.00 dollars we had in our pockets at the time. We didn't of course and ended up pressing our ears to a back door and pretty sure we could hear the crowd roar and "Born in the USA" begin to play.

Years from now, I think I'll tell the story like an 80's movie that ends with J.P. and I in a crazy series of adventures. We pretend to be roadies, but carrying a huge speaker I accidentally knock out guitarist "Miami" Steve . Disguising himself, J.P. takes over for him that night and plays a great set. He gets caught but it's all OK when I expose a corrupt agent from Bruce's recording company and save his career!

The credits roll dissolving into a scene of Bruce and the whole E street band playing at my birthday party.
Posted by Dave Lowe on Friday, June 01, 2007
Email ThisBlogThis!Share to TwitterShare to FacebookShare to Pinterest
Filed under: RISD Years