It was on this day in 1987 I graduated from the Rhode Island School of Design. I took a few minutes with a calculator to put some numbers together from the past 20 years since getting my degree...

9 illustrated children's books.
16 individual illustrations for magazines and newspapers.
11 television specials and misc. series that I did "on camera" illustration for.
22 television show set designs that "aired".
6 television show set designs that never "aired".
1 theater production design.
14 custom made "hero" props.
8 personal commissions.
2 interviews about me and my work.
9 newspaper/magazine articles that happened to have a picture of my work in it.
5 missed incredible opportunities I regret.
1367 (rough est.) overall total episodes of various television series/specials that I have prop'ed, decorated, styled or used some artistic skill for.

Not a bad score card so far, could be a lot better and certainly a lot worse. Here are some random figures I came up with from the past 20 years...

5 cordless screw/drill guns owned (DeWalt and Makida).
2 art stores that most of my illustration materials were purchased from (Aaron Bros & Carter Sexton).
12 different apts./homes I lived in and often created from.
4 cars I've owned and served me well.
4 states outside of California I worked in at some point.
24 movie sequels I saw based on films released prior to 1987.
4 TV shows or Movies I've heard RISD mentioned by name (Wedding Crashers, One Crazy Summer, The OC and Providence). There may be more.

The saddest number of all...

zero times anyone has actually asked to see my diploma to prove I graduated college... 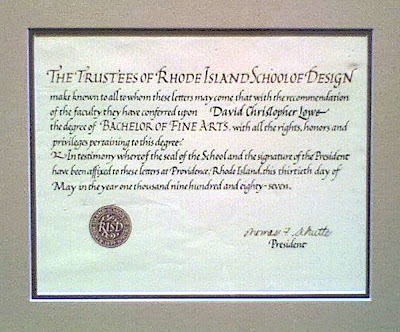 UPDATE: for more on graduation day and a picture from the day's program that if you look close you can see I graduated for sure along with friends like Megan Jeffery, go to her blog by clicking on her name I highlighted 15 words back.
Posted by Dave Lowe on Wednesday, May 30, 2007
Email ThisBlogThis!Share to TwitterShare to FacebookShare to Pinterest
Filed under: RISD Years