A Door for Dad

You know he is about 3 weeks away from buying it when he asks your opinion and thoughts on blah, blah, blah every other day (working it into the conversation). He's really just talking himself into it and your opinion is unneeded.

If you happen to be with him and he says come look at this blah, blah, blah with me...it's about a week from being bought. He never says I'm buying one.

The best part is, when he does buy the blah, blah, blah, he says he just happened to be at the store that day and thought "what the heck" and got it as if on some whim.

A few years back, one such blah, blah, blah were heavy faux antique spanish styled doors at Arte de Mexico. At the time they had a selection of random doors for any design use (wall hanging, table tops, room dividers, etc.). He thought one would look good on his patio garden just as a decoration.

I knew the countdown had begun. I had always wanted to try making one and this gave me a reason. I thought I'd surprise him with it, if it turned out OK. My budget was low, so I used stuff I had around. The main body was an old panel door. I framed it with 1" x 3" boards. The raised centers are wooden craft plaques from Micheal's. The nails are rust painted large wood plugs. I beat the heck out of it with a hammer and chain. Then stained, painted, sanded and beat it again to look old. 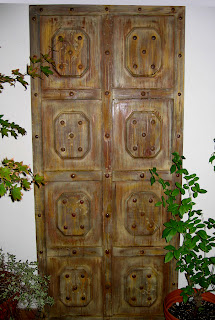 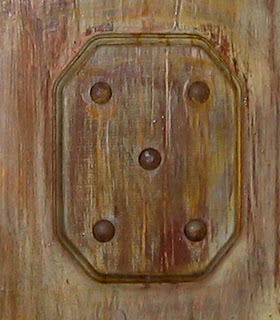 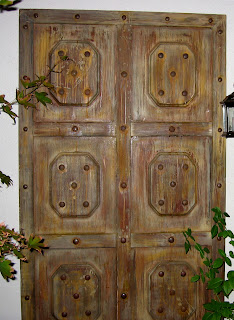 I wanted to add more details (like hardware, ornate moulding etc) but afraid to take it too far and I liked it simple. Besides, I knew Dad was now just a few weeks away from buying one. I figured if he liked it and wanted some extra detail I could add it later. He liked it as it was. The added plus is as the years go by it gets more weathered and looks better.
Posted by Dave Lowe on Thursday, June 28, 2007
Email ThisBlogThis!Share to TwitterShare to FacebookShare to Pinterest