Having not posted recently, here is the latest from the past few days...

Friday Flashback :
Due to work I missed doing a RISD, 20 years ago Flashback Friday post last week. So here ya go... what some in my family have called the John Hughes movie or Back to the Future picture from 1986 sitting outside my senior year room in Congdon House. I miss those "wayfarers" and I think the sneakers are still in my closet. 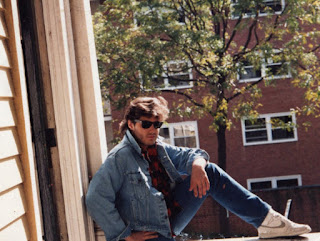 Saturday- The road to San Diego:

The last episode of the reality show I've been working on filmed in San Diego over the weekend. Shopping for decor went smooth but packing my car took longer than I thought...

After filling every possible empty space with flowers, props and bolts of fabric I hit the road later than I hoped.

Overnight road construction slowed everyone to a complete standstill for 45 minutes at one point as all four lanes were forced into one. Almost in San Diego being a little tired, I accidentally took the 810 freeway off the 5 freeway for a half hour before I noticed and went back. Once I finally got to the hotel around 2:30am, the front desk was closed and it took an hour or so to wake someone up to check into my room.

Even with little sleep, the next day went well and I got some needed sun working at a marina location.

After the drive home Saturday night, I took a nice long hot shower. Water got in my ear and drove me crazy. I tried q-tips, tissue and the classic hold your nose and blow thing. Nothing helped. The Fiancee suggested some ancient Italian cure of her people by putting a drop or two of rubbing alcohol in the ear that would evaporate the water. I fell asleep waiting for it to work.

The next morning I woke up totally deaf. She and I went to a close by urgent care. The doctor saw it was blocked by wax and they put in stuff to dissolve it. I was told q-tips are bad and I probably made things worse using one. Water was squirted into my ear to remove the wax followed by INCREDIBLE PAIN ! The pain shot through my jaw, neck and top of my head! They thought it strange to feel pain as I begged them to stop.

"But it's almost out" they said.
"Maybe but your taking something else with it!" I responded.

All the while the Fiancee blissfully read aloud pamphlet after pamphlet on various health concerns pointing out how I have every warning symptom in each one, including rickets and the black plague.

I gripped the table and let the procedure continue. Finally the wax ball came out with the nurse mentioning how big it was. There was also a "OOOOOOOO" moment when they saw why it hurt so much. I had an ear infection. The wax ball was huge, almost the size of a marble.
The nurse said she had seen bigger though. I was given antibiotics and sent on my way.

Monday, giant squids, my Sister and me.

My sister Monica and I share a love for TLC and Discovery shows on weird creatures, especially giant squids. The ancient mythical beast has been in the news often in the past year... being filmed alive for the first time and having the largest one ever discovered caught in a fisherman's net. Most recently a giant squid was found in the Atlantic Ocean, not it's normal habitat.

Monica has a cool giant squid design for sale at her online shop, Five O'clock Girl. 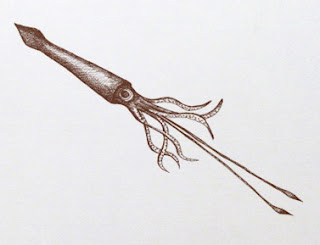 I ordered a shirt and a mug, they arrived yesterday and look great! You know, the coffee tasted better in a mug with great art on it!

Yesterday the Fiancee went to the store and asked if I needed anything. I asked her to pick me up some more coffee. This morning I went to brew a pot and enjoy from my new cool squid mug, I noticed she tried to be sneaky and make me healthy buying this...