This is the 3rd portfolio post in my HGTV's Outer Spaces series. The unexpected and welcome part of doing the work I do is having to learn new skills sometimes for particular projects. Water features became a big part of Outer Spaces and were wanted by many of the homeowners. Click on any picture to enlarge.

Often pre existing water fountains from a garden shop were used. Sometimes unique and "custom made" ones were wanted and needed to fit the design. Through much trial, error, cracks and leaks I learned how to make almost anything a fountain. 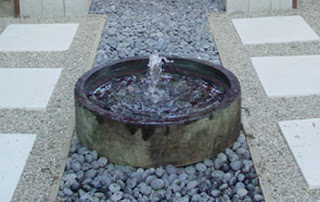 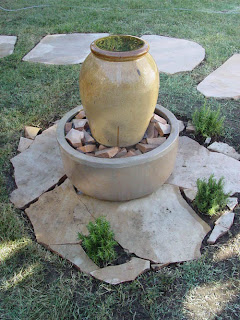 Some required a little thought like this custom made bamboo t-bar spout. 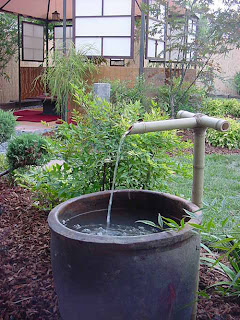 The complete custom made ones always brought a new level of difficulty. Some could be as simple as this one...a basin sunk below ground level and covered with rock to resemble a mini geyser. 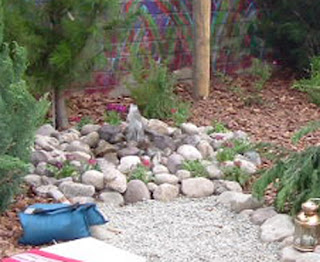 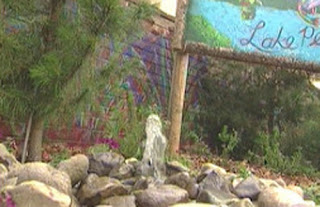 The custom projects early in first season were very hard. Guest designers wanting a unique water feature and producers wanting good T.V. projects often won out despite the time involved and my lack of water feature buiding experience. There was often no budget to have any made by a "water feature pro".

The pic below was the "Apocalypse Now" of water features. It was a 9' high free standing piece. The guest designer had sketched it and sold it to the homeowners but had no idea how to make it. I built it with exterior grade wood and sculpted the stone and details with exterior stucco. The pipe at top was drilled with atleast 50 if not more tiny holes to create a cascading sheet of water into the basin below. It took 2 full days to make in the shop.

The stucco coating was taking a long time to dry. I hoped to bring it from the shop to location on day 2 of the makeover despite the shooting schedule that wanted to see the designer "working on it" in day 1. T.V. won, so a couple of the crew were ordered back to the shop to bring it to location.

They got the shot they needed which included adding fresh stucco. It needed to lay flat in the backyard overnight until the stucco dried. During the night the sprinklers went off leaving an even wetter freshly stucco'ed water wall the next day! A camera crew had to go back a few days later to get the shot seen in the show of it working . 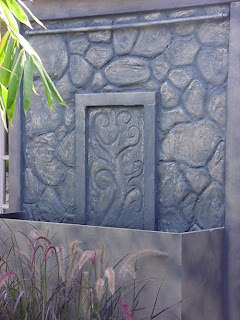 This one was the first pond I ever made. The spout was a bathtub fixture customized to fit a fountain pump. 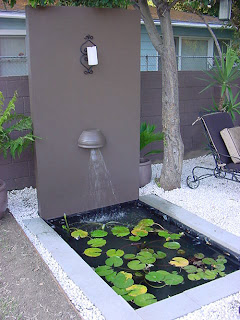 As the shows went on I gained confidence in my skills and found opportunities to include my own crazy idea's and creations. 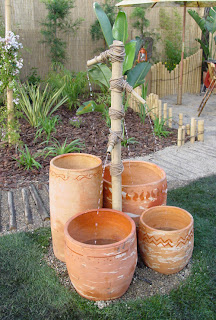 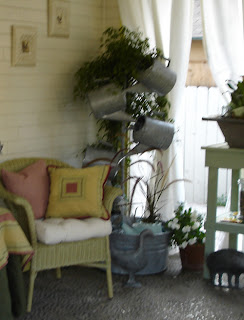 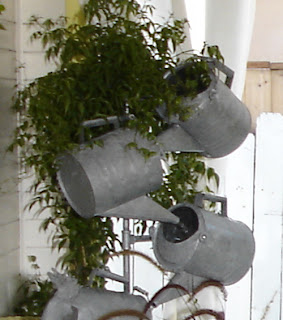 A "surreal" themed backyard was a fun one to do when every home owner seemed to want variations on a japanese garden. Rene' Magritte was the artist who inspired this makeover and at the zero hour it needed an extra detail. It gave me the opportunity to do a water feature design that was bouncing around in my head for awhile. That's a real umbrella and handle with the center post replaced by a copper tube to run the water through. 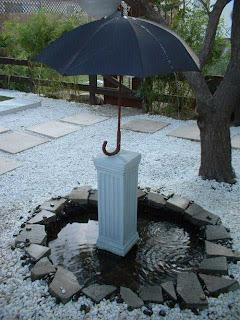 For a "Jazz club" themed makeover the designer wanted to include old instruments in some way. My assist Jason Garner, scoured the L.A. landscape and came back to the shop with all types of rusty broken musical items. As he pulled a tuba from his car we both said at the same time..."WATER FEATURE!" 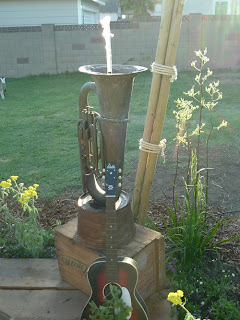 A faux pond with aquarium pebbles brought a needed break from getting soaked making the real thing. 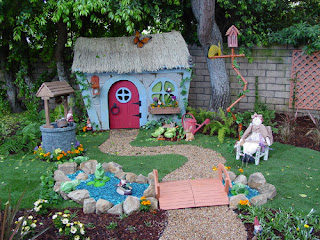 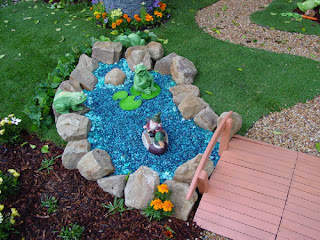 My art dept.'s skills were put to the test one day when a design required a 40' long canal to run the length of a patio, including a centerpiece with a 4' high overflowing water pot. It was a big makeover, the guest designer had brought in her own "personally trained" crew of people she was used to working with to help with the entire project.

Working with the designer, it was decided my crew would make and finish the canal and her team would paint and decorate the patio. She was convinced the canal would take all 2 days of the makeover time to do. She thought her team knew her vision so well and were so good that they would be done with the patio makeover early in day 1...sure in real time, maybe, but this was t.v. filming time. She offered me their help to finish the canal if needed.

I was proud and protective of my battle hardened team and felt she threw a glove down as if her crew was better than mine. Well, I got satisfaction at the end of day 1 when my crew was helping hers on the patio. 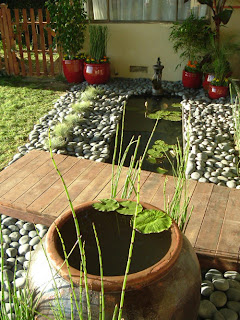 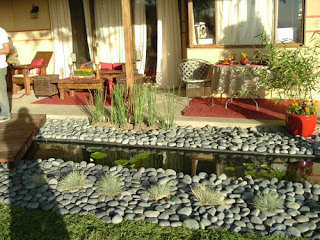 Posted by Dave Lowe on Thursday, January 25, 2007
Email ThisBlogThis!Share to TwitterShare to FacebookShare to Pinterest
Filed under: HGTV