Now that the "oscars" are over I was thinking about all the awards I have won...

Every October in Scarsdale, N.Y. where I grew up, there was the annual Halloween Window Painting Contest. It was a big event that kick started the halloween season. Kid's from 3rd to 10th grade from anywhere in town could paint a small section of the various store windows in the downtown village. I entered for 5 years in a row and never even earned an honorable mention. Then in 1980 (the last year I was eligible) I won the $100.00 grand prize.

It really was a big deal for me then. To this day I still display my trophy. 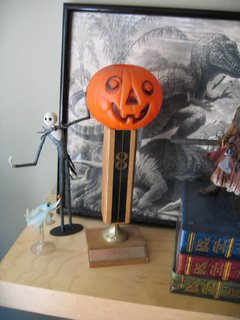 I made the local paper too. My Mom like some rabid Hollywood agent or publicist within seconds after we saw it called the paper with the correct spelling of my last name and to inform them I went to IONA Prep and not Scarsdale High as they mentioned. The Inquirer was very nice to print a correction in the next week's issue, even though I was sure they would print the headline..."Furious Mother corrects newspaper editors and causes Grand Prize to be revoked". 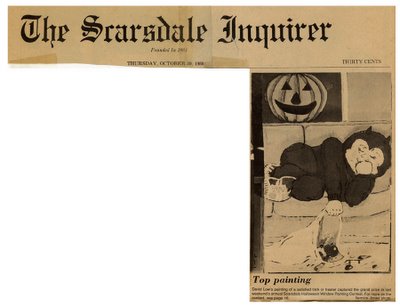 As only a Mom would, she states...when this part of my history comes up in family story telling...that in all our years living in Scarsdale, my window (at the time) was the only one to be printed on the front page - above the fold.

A critique of my work 26 years later:

I still have trouble with anatomy.
Whats with the candy cane?
Who gets candy canes trick or treating?
Why did I give the kid such a huge round head?
I wanna go back in time and slap myself while painting it for it's obvious problems....on second thought...I would of slapped back and caused some "time-line" issues and then maybe never have won... so forget the whole "go back in time" thing.

Now ...check out the quality and mature level of painting by Hanna Zornow, the 2003 winner...wow!


Posted by Dave Lowe on Sunday, March 05, 2006
Email ThisBlogThis!Share to TwitterShare to FacebookShare to Pinterest