Only two creepy creeps make this post of the list. Both scared me enough to never forget them, yet I could not remember what they actually were or where from. After some detective work, these once nameless eye hiding fears have been identified. 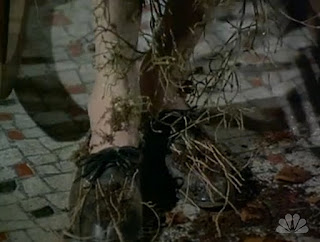 Mrs. Bowen
My grandmother was babysitting one night. I woke up and walked downstairs. She was watching TV and let me sit with her for a bit. I remember seeing a man stumble into a room. There was a woman in a chair singing a song. Her feet had vines growing out of them. The camera slowly moved upwards.

That was all I needed to see. My eyes closed tight fearing her face being revealed.


I've since learned it was a segment titled Green Fingers from Rod Serling's 1972 series Night Gallery.  It starred Elsa Lancaster as Mrs. Bowen. Watch the entire episode for free via HULU. 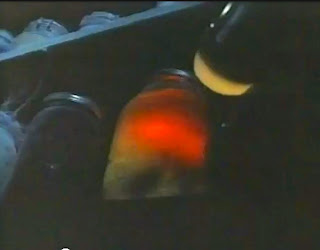 Devil in a Mason Jar
I only remember a mason jar on a barn shelf that was glowing red and pulsating. I also knew it had the devil trapped inside.

That's it. No memory of where I was or what came before. I know I saw it on TV. I not only hid my eyes, but ran out of the room in terror. This one's haunted me for a long, long time.

Thanks to the memory of an old friend though, I've discovered it's from a TV movie directed by a young Steven Spielberg in 1972 titled Something Evil.

Posted by Dave Lowe on Saturday, October 15, 2011
Email ThisBlogThis!Share to TwitterShare to FacebookShare to Pinterest
Filed under: Halloween 2011