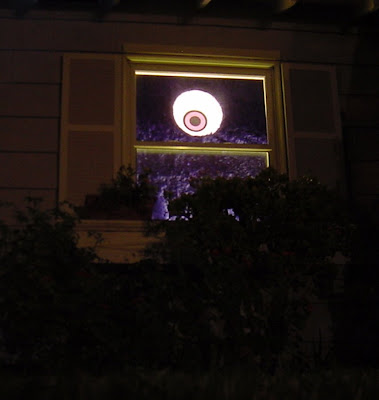 I love the creepy statues that watch you walk by in Disney's Haunted Mansion. I've always wanted to make my own when I discovered how it was done. The secret? They're translucent, back lit and most important...concave. This creates the optical illusion of being 3-d and turning with you. Being the "zero spending" on decor year and with limited resources, I made a giant monster eye in one of our front windows that uses the same principle. It was just an experiment that worked. It's also really painless and simple to do.

Here's a quick video of it in action...

Before I get into how I made mine, seek out any alternate better materials that can be used here. I'm just using what I already have.

The bowl I used had a indented flat circular base. This was perfect as it gave me a centered instant template for an iris and pupil. I made the outer area frosted by gently scuffing the inside with sandpaper. I sanded in straight lines from the edge to center. The lines will help sell the 3-d illusion later. It's good to wipe away the dust as you go as it will give you a false sense of opacity. You could also use frosted glass craft paint instead.

Once happy with the translucence, I made the outside black line of the iris. I taped the raised edge of the base. I wanted this to be completely light proof and silhouetted. The electric tape is great being flexible and molds easily to the tight curves. Do the inside edge first in shorter strips. The tape tends to pull against itself here. The overlap of the outer edge tape will keep it from peeling.

For the inner portion, I measured the diameter needed and created the color and pupil in Photoshop. I wanted it to be translucent and glow so printing on plain white paper works great. This also makes cutting out the perfect shape and size easy. Colored tissue paper or again, glass paint, would work well too.

I wanted the pupil to be as opaque as the taped ring. I colored in both sides with a black sharpie. The bleed through from coloring the front first gave me a template for the back.

I decided to play it safe by not gluing the iris and pupil onto the bowl. I didn't want to risk messy residue or bubbling. I just scotch taped it, pulling it tight and flat. Remember, this needs to be concave so have the pretty side facing inside the bowl.

For the giant monster feel, I wanted to block out the whole window plus give the eye something to attach to. I happened to have 2 yards of craft fur left over from a past project which was perfect. The eye needed be flush. My bowl had a larger lip which created a "step" and gap. I cut that off. I test fitted the window and marked off where the eye would go, then traced the bowl's shape on the fabric.

I cut the circle out about a 1/4 inch smaller than my traced line. This insured a good fit and gave me the ability to wrap edges a little for a secure hold. I took my time gluing to avoid runs and drips. Remember, you want the bowl curving inwards away from the window. 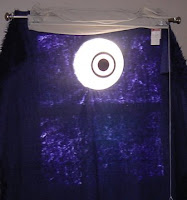 Inside the room I just thumb tacked it to the top edge of the window frame. I used tape to pull it tighter where needed. You can also use poster board or black construction paper and tape it all in place. 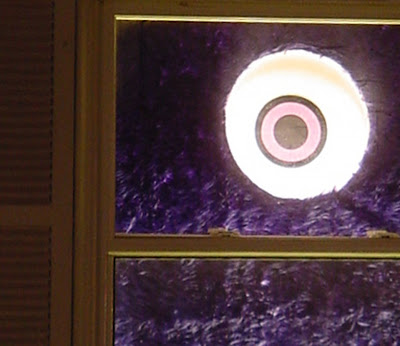 I just pointed a swing arm desk lamp at it and waited for dark. I also pulled the bottom away from the wall and added a bit of under lighting so the fur would be hinted at. The photos I took are blown out. The sanded lines and a nice shadow really create a 3-d effect. I rushed to put it up today to see if it works, but tomorrow I'm making it a bit blood shot which should really make it pop. I'm thinking about adding a big toothy grin as well. 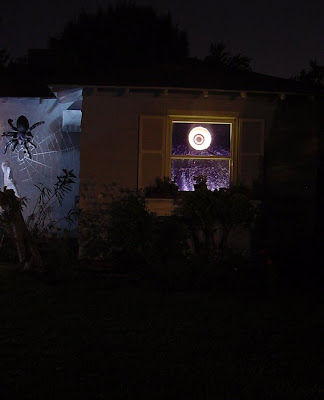 It's first and unexpected "soft opening" review came in tonight. My brother Ted was over and we were outside when a family walked by. One of the kid's pointed out the eye and yelled "It's following us! Look! Look! It's following us!"

Pistons, gears and gizmos...insignificant! But it would be really cool if I figured out how to use them one day.
Posted by Dave Lowe on Sunday, October 12, 2008
Email ThisBlogThis!Share to TwitterShare to FacebookShare to Pinterest
Filed under: Halloween '08, How to's, Props