In 2002, I storyboarded the ABC network opening to the 74th Oscar "ON THE RED CARPET" pre-show. Just the previous year I designed/made the 73rd Academy Award Governor's Ball chandeliers and centerpieces for "event" stylist Edgar Zamora.

The Oscars were moving to the new KODAK THEATRE on Hollywood Blvd. The concept was to celebrate being back in the heart of Hollywood.

The scene/camera would open on a aerial view of the LA landscape and fly past famous landmarks getting lower till reaching Hollywood Boulevard. Then speed along at street level towards the KODAK THEATRE were it would stop and cut to a montage of past red carpet entrances starting with the earliest on film. Previous "best picture" winners or famous films would be seen as billboards. Well known stars or characters might be CGI added as people on the street. Very fast "blink of an eye" morphs to the next landmark would speed things along.

My job was just to sketch the idea on paper to help the production visualize it. Some of what I doodled was actually filmed as I drew it.

Below are a few random pages. Ignore the hand written stuff, just notes to myself. The image on the last panel is a "old" Hollywood picture I used to represent the start of the montage to old award footage. 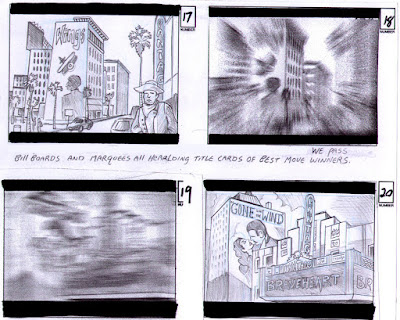 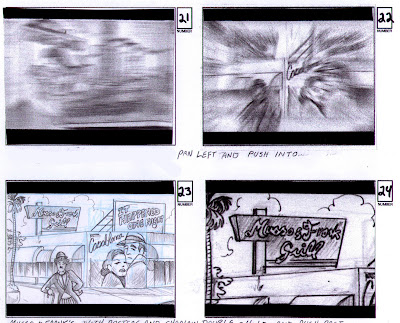 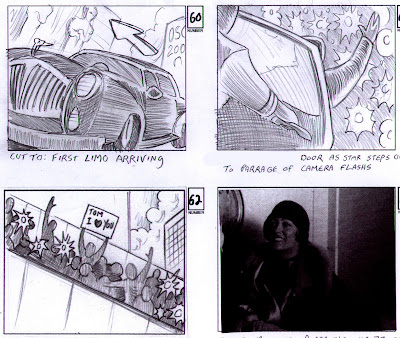 Posted by Dave Lowe on Tuesday, October 09, 2007
Email ThisBlogThis!Share to TwitterShare to FacebookShare to Pinterest
Filed under: Illustration