"What an excellent day for an exorcism" tour.

Keeping in the Halloween spirit. Several years ago I went back to the Fiancee's hometown of Baltimore to spend New Years with her Family. We drove into Georgetown for one single purpose...to show me something she knew I'd love... THE EXORCIST STAIRS! Here's me calling my brother asking "Guess where I am right now?" 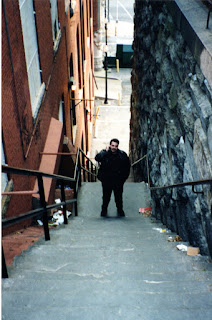 This was the location for the well known scene when Father Karras demands the demon possess him and once it does, hurls himself out the window and rolls down the staircase to his death. 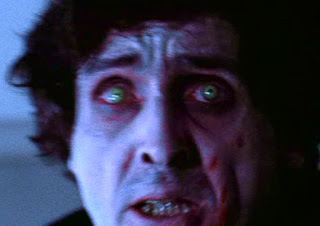 A fun bit of movie magic...the actual house location was elsewhere in Georgetown. For this scene a facade of the building with window was created at the top of the stairs. Each step was covered in rubber to protect the stunt man. If you look close watching the movie you can see the padding.

I do have a picture of the Fiancee on the steps from the other direction, but I dare not post before getting permission. Misquoting HAN SOLO expresses how it felt seeing the stairs...

"I've worked from one end of Hollywood to the other. I've seen a lot of cool things. But I've never seen anything that has made me really giddy with geeky horror movie fan happiness. I had to go to Baltimore for that."
Posted by Dave Lowe on Saturday, October 27, 2007
Email ThisBlogThis!Share to TwitterShare to FacebookShare to Pinterest