The adventures and times spent with my friend Pete Whitehead while students at RISD in the 80's could literally be a daily blog unto itself. Let this "Flashback Friday" be a simple introduction to him. Today, Pete is a successful illustrator and card designer working at Hallmark Cards in Kansas City. You've probably given his work to a friend on a birthday.

During my first week in college, I had to try and be friends with my roommate but I knew it would never be more than a forced polite relationship. With everyone else, I was shy and awkward, just nodding at in passing. There was a freshman class orientation field trip one day. On the bus ride someone referenced a old Bugs Bunny cartoon. The guy who lived 2 doors down the hall from me quoted a line. I quoted the next one and we went back and forth. That was my first conversation with Pete. Four years later he was the last person I said goodbye too boarding a plane home.

The one thing that stands out in our friendship was genuine, crying laughter. We worked hard trying to make each other laugh all the time. I'll tell many Pete stories in time. We keep in touch now and again. A great perk still being his friend was getting a hand drawn, original Hallmark card for my birthday one year... 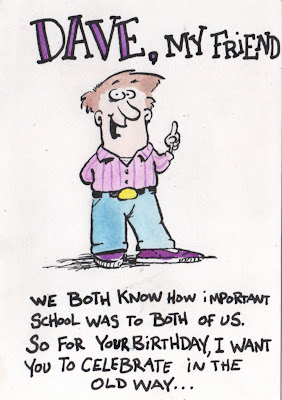 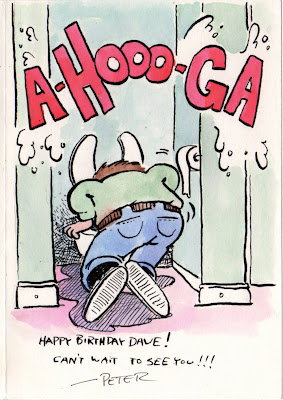 ...and no, the friendship was not just all drinking and partying...we cracked the spine of a book now and again...well Pete did for sure...and had intellectual discussions...well, sometimes, mostly about Saturday morning's Pee Wee Playhouse...or at least Pete told me about it after I woke up in the stall. Pete liked to go to bed early on Friday nights just so he could act all superior to me the next morning.
Posted by Dave Lowe on Friday, September 14, 2007
Email ThisBlogThis!Share to TwitterShare to FacebookShare to Pinterest
Filed under: RISD Years