Friday was the official 30th birthday for STAR WARS which opened on May 25th 1977. I celebrated yesterday by attending one of the five day long Star Wars convention in town this weekend with my brother Ted and friend Andrew. All are actual photos taken on the day, moments described might be...embellished. Click on photos to make sort of bigger. 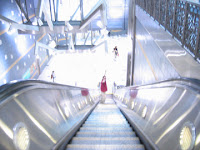 We decided to take the metro train from the valley to downtown. Ted lead the way.
"We have to maneuver straight down this escalator!" he said and mumbled something about secret plans provided by his girlfriend Leia. 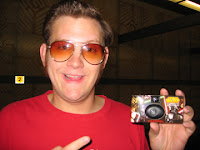 Andrew met us there. He was really excited to use his official Lucasfilm approved camera.

"...and my sunglasses make me look like a real X-Wing fighter pilot, right?" he asked. 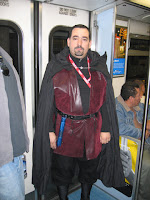 We had a bad feeling while riding the train. A few rows behind we believed was a sinister "sith" spy following us. He said his name was Mark and was just commuting to work at his accounting office like any other day.

Hmmm, I don't know... that did not look like a calculator hanging from his belt. 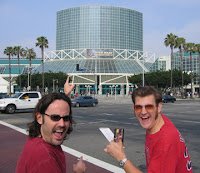 We managed to loose the spy by hiding in a janitor's closet at the next stop. Later, outside the convention center, Ted and Andrew seemed bored already.

Ted went to buy our tickets while Andrew picked his up at the "will call"... 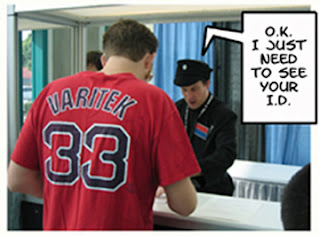 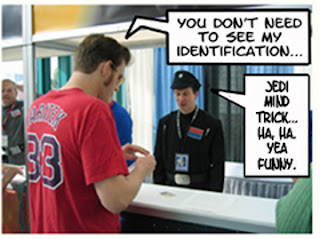 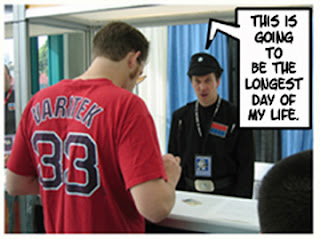 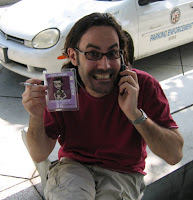 Excited to have our tickets, Ted called our Mom to tell her and let know we were OK. She told us she would pick us up at 5 pm sharp! 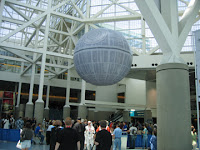 Once inside Ted said

"Everyone's headed toward that small balloon." 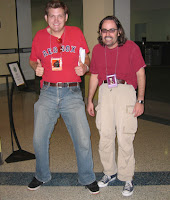 We decided to play it cool and grab a cup of coffee first at a Starbucks stand. It was a wretched hive of fans and costumed villainy. Andrew was happy because imported "jabba java vanilla hutt" was the coffee bean of the day. Ted was a little miffed because "Starbuck" was a character in Battlestar Galactica and this was a Star Wars convention. 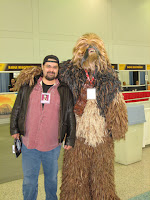 As they got the coffee, I thought about what we were going to do that day.

He had ideas of scheduled events that may suit us.

Then this really tall guy named Peter Mayhew walked by and said..

"That's not a real wookiee."

Whatever, what did he know?

Andrew had already hooked us up with "VIP" seats for the Star Wars in 30 minutes show knowing some cast members. We saw it and it was hysterical. We then went down to the main floor and walked around, Andrew got separated from us.

Looking for him. We got lost in a far, far away hallway and met a local tribe. I was glad to be fluent in 10,000 forms of communication. The locals had a primitive dialect but I was able to translate directions to our way back. 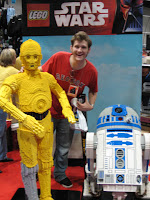 About an hour later, we found him at the Lego booth.

"Hey, lookit what I made?" he said

Although his work was impressive, most impressive. Ted and I decided Andrew might be a little too dorky as company. We needed to ditch him. 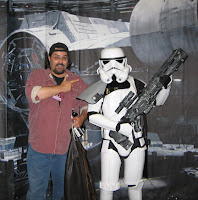 I talked to local security.

"This guy can help us!" I exclaimed to Ted and also asked if Stormtrooper uniforms were available in XXL, because I want one.

They referred us to an experienced underworld figure.

He thought Andrew might be "worth a lot to him" and
took the job. 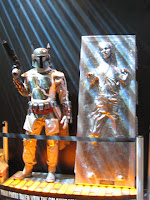 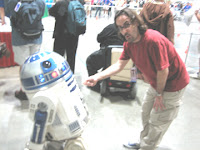 Now free of Andrew's nerdiness, we decided to have real fun. Ted took out extra "mad spending" cash from the nearest ATM.

We bought stuff for us... 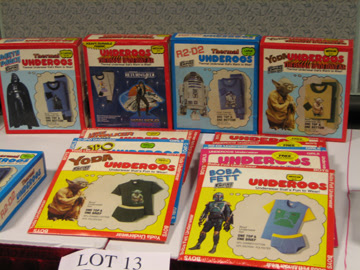 and of course something for our girlfriends at home... 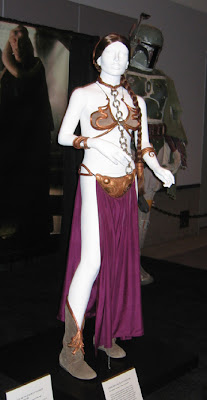 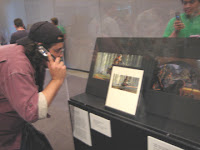 It was soon 5pm and Mom called saying she was waiting out front to pick us up just as I was looking at the original art by the first Star Wars concept illustrator, Ralph McQuarrie. 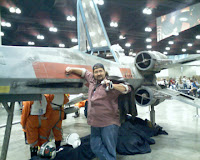 Even though I had better ideas for a ride home, we had to go. 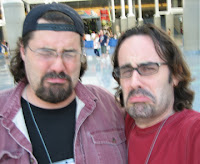 Man oh man. It so sucked to leave.


Star Wars for my generation is one of those movies everyone remembers the first time they saw it. For Ted and I... our Mom took us to the 2:45 pm show at the (then) General Cinema theater on Central Ave. in Yonkers. My parents had to put up with us wrecking the house during lightsaber duels in the hallway and defending the basement from stormtroppers for years after.

My Aunt Joan and Uncle Joe had their hands full as well because everytime we got together with our cousins Christine and Mary Alice the entire Star Wars cast was assembled... I was Chewbacca, Christine was Han, Mary Alice was Leia and Ted was Luke. My little sisters although too young to play with us often were made C3Po and R2D2.

Uncle Joe worked at 20th Century Fox and made Ted and I 2 of the coolest kids in Grade school by giving us promotional posters, t- shirts and stuff no one else had (expect for my cousins). The best was years later he made us the coolest kids in High School getting us press screening invitations to see "Return of the Jedi" a few days before it opened everywhere.

Mom went with us to the Ziegfeld Theater in NYC. We embarrassed her because the only two people in the older more reserved audience yelling and cheering on the heros were her sons.
Posted by Dave Lowe on Saturday, May 26, 2007
Email ThisBlogThis!Share to TwitterShare to FacebookShare to Pinterest
Filed under: Adventures of Dave