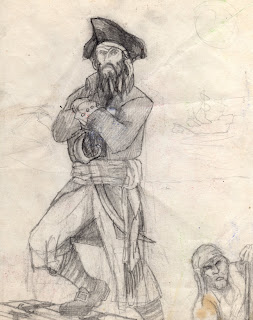 I loved Pirates long before Johnny Depp made them cool. Here's a long story about how long they have been a part of my life...

In the spring of 198O, my family took a big vacation to Los Angeles (a few years before we actually moved here) We did all the usual tourist things the first couple of days then we went to Disneyland. For a person like me with a big imagination and used to typical "roller coaster" ride amusement parks like Rye Playland, the detail and showmanship of it blew me away! It was everything I heard it was, saw on The Wonderfull World of Disney and more.

It was a great morning spent walking around and going on many rides. I was already euphoric as we climbed into the boats on "Pirates of the Caribbean". Just riding through the swamp and going down the waterfalls into the cave I thought was one of the coolest things ever. I was ready to ride it over and over again just seeing the skeleton pirate vingettes. As we moved into the last dark tunnel I assumed the ride was over. Then... as we came into the open, hearing cannon fire and seeing the full scale ship, I literally got goosebumps and for the first time knew what "stunned amazement" felt like. I remember my Dad giggling out loud at my reaction. I was 14 and felt 5 years old.

I walked out of that ride and sensed a profound change in me. It was one of the major influences that put me on a course to do what I do today. It was being in life sized dioramas I made as a kid, it was experiencing a living children's book illustration. All of Disneyland infected me...I wanted to draw, make and create stuff like it! I rode "pirates" 2 times that day and again 2 or 3 times when the family went back to Disneyland the last day of our vacation.

My 2 Disneyland souvenirs were a thin, soft covered book (click to see) about the ride and a brass pirate flag belt buckle. I could not put the book down for months. It was illustrated with great early conceptual sketches by Marc Davis. I could not stop drawing pirates after.

Seeing my new love of buccaneers, my Mom (who had introduced me to pirate movies via Errol Flynn as a kid) told me about the great american illustrators Howard Pyle and N.C. Wyeth. These 2 artists created the iconic, visual myths and worlds we know as pirates today. I found out they were also beloved illustrators of my great uncle Tom Dunn (a talented artist and first mentor). Mom dug out 2 old edition books she was raised on and ones she said she read to me as a little kid - Howard Pyle's Book of Pirates and the N.C. Wyeth illustrated Treasure Island. I too fell in love with their work and my thoughts of illustration as a career began (thanks, Mom!).

I went to art school and found more opportunities to draw them. An illustration I did as some homework in 1985... 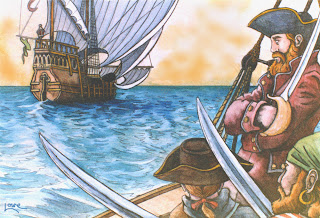 Today, I have the old edition of Book of Pirates (Mom and Dad have the Treasure Island) and keep a framed N.C. Wyeth illustration poster in my studio as inspiration. My Disneyland souvenir book is long lost but have many new books with Marc Davis's work. 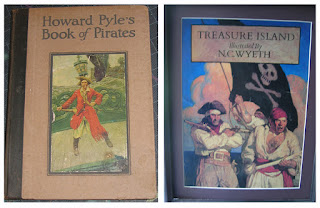 In the dining room hangs (with a Haunted Mansion ride poster) a re-print of the Pirates of the Caribbean ride poster at Disneyland you see walking into the park under the train tracks I bought in 1999 and since had framed. When "the fiancee" and I first moved in together she did not quickly agree as "great" art to be hung in common rooms. She was there the day I bought the prints and knew my love of pirates and a nice memory of our trips to Disneyland, but...was it art?...I presented my case. After much deliberation (with her sister, who shares the house with us) It was OK to hang and considered "retro" cool and better than the "Star Wars" toys I also presented as an option to display. 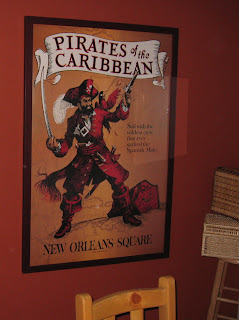 A small closing story. Remember the pirate flag belt buckle I mentioned getting from Disneyland? I wore it so often in the months later it broke! My Dad working in LA at the time drove to Anaheim, paid admission into Disneyland, bought me a new one and left. I never asked for a new one, he just did it.

So, no matter how good or bad the new Johnny Depp movie will be this weekend, I'll enjoy it...Pirates of the Caribbean, my art, my Mom and my Dad are forever connected in some surreal way.
Posted by Dave Lowe on Tuesday, May 22, 2007
Email ThisBlogThis!Share to TwitterShare to FacebookShare to Pinterest