Flashback Friday #7 -The Catcher in the Rye

Here is the latest in my Rhode Island School of Design class of '87 , 20 year anniversary posts. At RISD, in your final semester as an illustration student you were required to do a senior degree project. A project that shows all you learned and ready to venture into the real world.

I decided to illustrate J.D. Salinger's The Catcher in the Rye. It raised eyebrows as a choice from friends, peers and professors. I was commended for picking a unique challenge with obvious skepticism as to it's success.

My hope was to create 10 -12 full page color illustrations capturing important story moments and numerous small "spot" illustrations almost like doodles that would illustrate Holden's random thoughts, as in... what happens to the ducks in Central Park in winter.

I never created any finished illustrations. The final project I presented was a portfolio of thumbnails and sketches. I got swept up in a side project painting a mural in the freshman dorm lounge giving Holden Caulfield very little attention (click here to read about that). 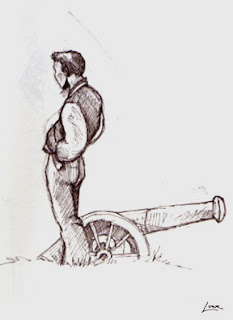 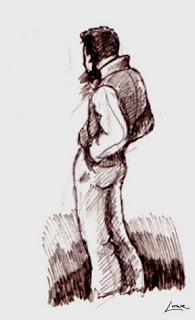 I tried to change my bright children's book cartoon style too quickly. This was part of the project being unfinished regardless of the time I spent on the mural. I wanted to create images that were gritty and real but still captured the sarcasim in Holden's words in an exaggerated cartoon way. I sketched and sketched and sketched. I never got close to what was in my head. It was too ambitious a project for my skill level at the time.

Below are a few more sketches from the project... 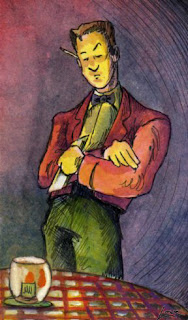 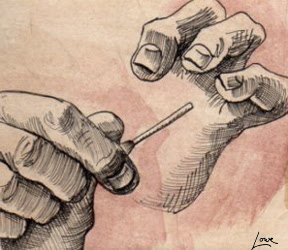 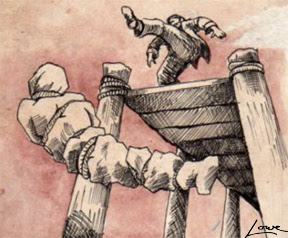 Posted by Dave Lowe on Friday, May 11, 2007
Email ThisBlogThis!Share to TwitterShare to FacebookShare to Pinterest
Filed under: RISD Years