The bookend to the Fox Family Channel show- Morning Scramble (which I previously posted about here) was The Basement. This was a more pre-teen oriented interstitial show between cartoons in the afternoon. It had 3 hosts and puppet characters. This set, as with the Morning Scramble, was designed by Wayne White. I was the day to day Art Director.

Midway in production I was asked to design a new area on the set to change things up from the often used center stage couch. I came up with a wonky sewer pipe bar idea that would come off a rusty pre existing boiler set piece. 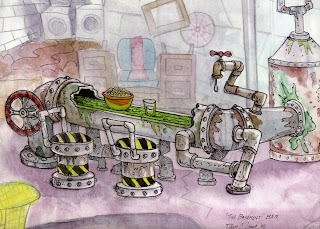 I was a little disappointed that time and money prohibited making the clean elbow joints and askew lines of what I sketched above, but I liked the final piece very much.

The main body was constructed from sono tubes. The flat top was thick plexi, covered in green tinted resin. For an oozing liquid effect it was under lit with chasing lights. The detailing was a loose & freeform process using all sorts of junk ...trash can lids, pvc pipes, plastic bowls and old fixtures. During the build I revised the large "shut off" wheel into a side table. This allowed the hosts to be fully seen and give a good place for puppeteers to hide behind the bar. 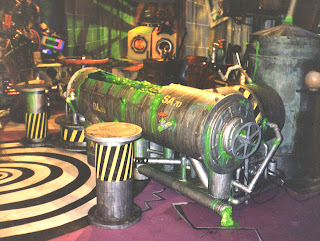 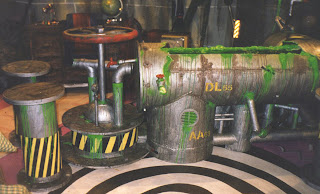 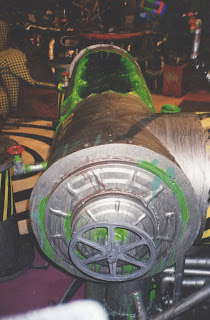 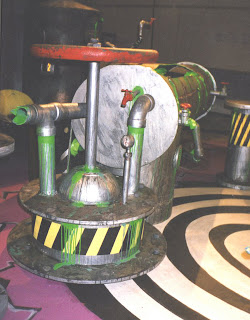 Posted by Dave Lowe on Sunday, March 04, 2007
Email ThisBlogThis!Share to TwitterShare to FacebookShare to Pinterest
Filed under: Fox Family Channel