In 1994 I was asked to design the set for HGTV's Simply Quilts by Weller Grossman Productions. At the time I was the art director & propmaster for the Carol Duvall Show which they also produced. I had never designed a set for HGTV (I inherited the Carol Duvall set from another designer) and jumped at the opportunity.

The design came with a challenge.

The new season of the Carol Duvall Show and the first season of Simply Quilts (being produced by the same company) was to be shot back to back. I was asked to design the Simply Quilts set as a re dress of the existing Carol Duvall Show set, which was scheduled to shoot it's next season first. Money and time was saved keeping the set standing without new construction. I was ordered to make look different and not change the lighting plan that already existed. I was given a day in between to do this, so one show could just roll into the other.

I accepted the challenge and designed a amish/rustic feel that everyone liked. The decor would instantly transform the old set.

The main walls were the biggest problem. The quick change was tacking on wood paneling to create the warm, rustic feeling. The areas above it got a fast coat of sage green paint in under 2 hours. Easily repainted next year when going back to the Carol Duvall set. 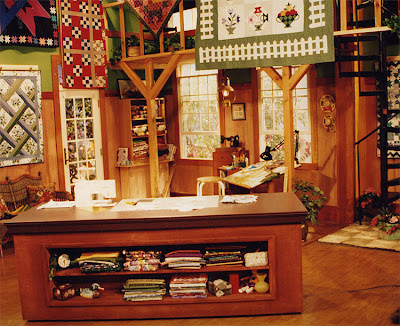 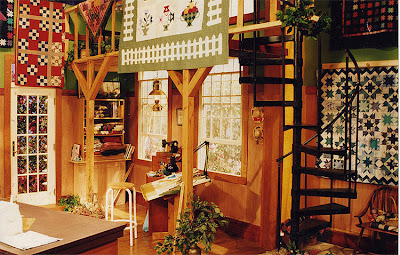 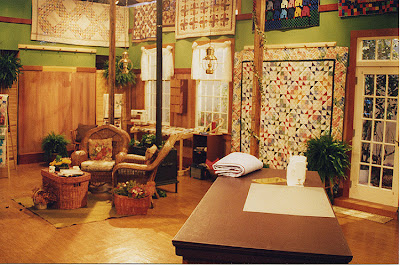 In those days it was a 2 person set building shop in a backyard... my talented friend/carpenter, Greg Holleman and me. Greg alone built the posts, faux loft, demo table and pre made custom fit paneling for the walls. I focused on decor and other details including making the faux cast iron stove that sat between the chairs in the conversation area.

Shortly before the load in of the Carol Duvall set I was informed scheduling had changed. I was told I would have to transform the Carol Duvall set to Simply Quilts (and back again) every other 2 days...overnight. It was a long couple of weeks, but it happened, thanks to help from assists at the time Rob Lee, Chris Sullivan and Brett Winn.

The next year both shows thankfully each had independent shooting schedules. In the seasons after, the little details were asked to be removed and the design became a little watered down. The faux loft, hanging lamps and ferns were told to go away among other things. It still remained a re dress of the Carol Duvall set as of 1997 when I moved on from Weller Grossman productions.

I've noticed watching re runs of episodes after the years I worked on each, the Carol Duvall Show (at some point) got a brand new set. Simply Quilts looks like it continued to use the old set. Host Alex Anderson was always nice and patient with me and other crew new to quilts and learning at the time. When not showcasing a guest's quilts per episode we used Alex's to dress the set.
Posted by Dave Lowe on Wednesday, May 02, 2007
Email ThisBlogThis!Share to TwitterShare to FacebookShare to Pinterest
Filed under: DIY Network, HGTV