While a freshman at RISD in 1983/84, I became friends with Chris Shafer. He was an open comic book fan while I still remained a shamed one. I was scared to admit my love of them. I had a history of ridicule, especially being discovered in my high school junior year walking out of the "Hero World" comic shop at the local mall by fellow classmates.

One night hanging out in Chris' dorm room, he showed me some comic art he had done. I was blown away... not because it was good (which it was) but because it was page after page of a fully realized original comic book. I expected single drawings of Spider Man or Hulk (like I always did). These were his own characters, drawn and inked like a pro!

Most of it was his character, Obscenito: the dirty bunny. A human sized rabbit as a classic "noir film" detective. Chris said the best part for him was never knowing were each page would lead, making it up as he went.

I was inspired. His work showed the dedication and time of a serious student of comic book art I never met or knew of. Anything I had done before was just "fan" art. I went back to my room and started doodling my own character. I wanted my own created worlds to have fun in.

By Sophomore year I created, SCRUFF, an overzealous, dim-witted bear that was a wannabe amalgam of Indiana Jones and James Bond. 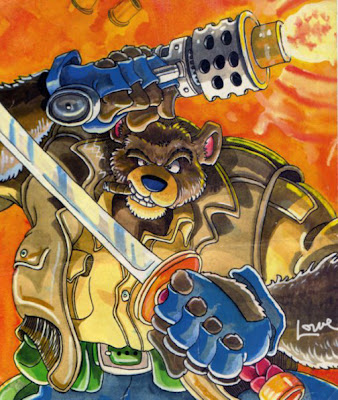 For fun I proposed to Chris doing a comic together featuring Obscenito and Scruff. He agreed and suggested we might make it an official "independent study project" and earn class credit. It was approved. We had to write and draw a comic book as homework for a semester... art school rocks!

Chris and I bounced off the walls one afternoon, writing the overall adventure and doodling a loose thumbnail for the entire comic. We locked in story/layout details 2 or 3 pages ahead of the one being finished on the drawing board. Chris would write the script while penciling the pages action. I inked them (yes, I was the tracer for any Kevin Smith fans reading this).

It was a great learning experience, our work did get better from page to page. I remember us talking about re-doing some as the project evolved. I look at now and want to go back in time and point out to myself the many problems I saw as great work.

Here are a few pages (those I could find). 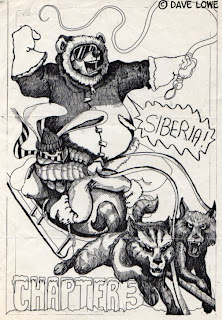 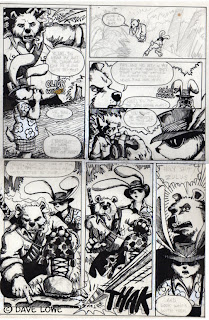 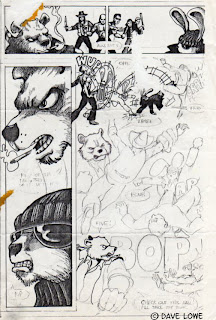 Our "independent project" sponsor/professor Judy Goodwin Sturges suggested we meet with a professional comic artist to review our work...we shouted, Walter Simonson! An alumni of RISD and one of the best artist/writers working at Marvel Comics at the time (or ever). Tom Seguros, former head of the Illustration Department, set up a meeting. We drove to N.Y.C. for a great experience I'll wait to tell another time.

It was a great time to be a comic book fan. In those years Frank Miller (300, Sin City) created the great Dark Knight saga. The term "graphic novel" was coined and self published comics started to grow chipping at the foundations of Marvel and DC.

I recall Chris and I both laughing at a crappy black and white self published comic once at the local shop. The art was silly and the story lame. We knew we could do better. I bought the first issue as inspiration and soon let it become a weathered torn up beer coaster. I eventually threw out. It was called Teenage Mutant Ninja Turtles. That issue is now worth $250.00 dollars. Who knew?

Our project faded after earning our school credits that year and was never completed. My love for Scruff never did. After I graduated in 1987, he became a creative "comfort blanket" easing my separation pains from college. I continued to draw and evolve him in my own hoped to be comic book in 1987-88. He was rejected by all the small independent publishers of the day (one now a big time publisher)... 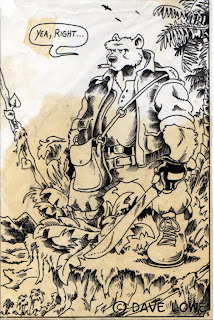 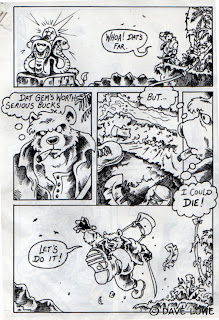 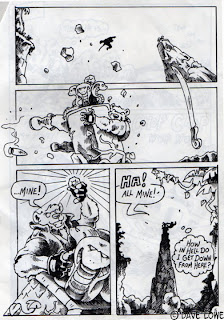 I then tried to sell him as a newspaper cartoon series. Because of the original project I loved Scruff with a rabbit partner. I created Wambo Wabbit as his sidekick. Inspired by Chris's character but more the typical comedic cartoon foil. It was rejected by all the syndicates.

Here are a few panels from a Scruff and Wambo adventure meeting King Kong's younger brother, Pete on Skull island. 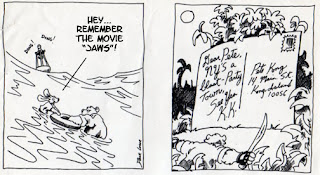 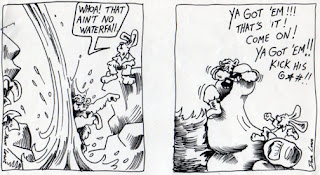 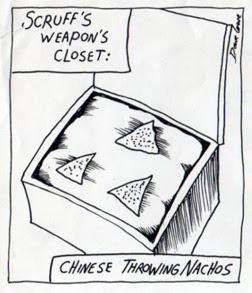 In those years I would also drop my portfolio off at Disney Feature Animation and Disney Television Animation looking for work. It contained a lot of Scruff art. In 1990 Disney's "Tail Spin" series premiered featuring Baloo the bear from the Jungle Book as a globe trotting adventurer. Coincidence? maybe, but it sure took the wind out of my love sail for Scruff.

I really miss Scruff and may one day re -invent him. Seeing the old work I know why it was rejected but there is a solid character in him and adventures worth telling.
Posted by Dave Lowe on Friday, May 04, 2007
Email ThisBlogThis!Share to TwitterShare to FacebookShare to Pinterest
Filed under: RISD Years