Old man Ghoulsteen had two lazy, spoiled, good for nothing children. Everyday of their lives, everything they did, if they did anything at all, was with no effort or care.

After many, many frustrating years, old man Ghoulsteen told them he was tired of hoping they would ever make him proud. He would let them live their selfish lives, leeching off his money under one condition...upon his death they bury him under his favorite tree, in the finest casket money could buy so he might rest comfortably for all eternity.

His children agreed, but when he died, they bought the cheapest coffin and just left it standing up in a shallow hole because digging was far too much work.

The following Halloween, his children found out how unhappy old man Ghoulsteen was about it... 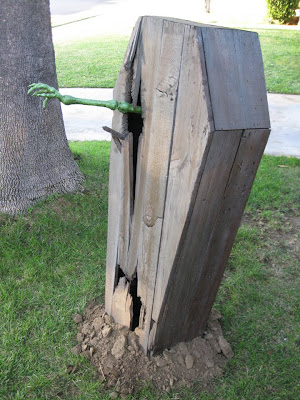 Posted by Dave Lowe on Saturday, October 10, 2009
Email ThisBlogThis!Share to TwitterShare to FacebookShare to Pinterest
Filed under: Halloween '09