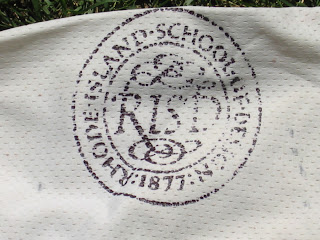 September is here and the football season is starting. Ah, reminds me of those glory days on the grid iron at ART SCHOOL. What, RISD had a football team? Well, sort of. We never had practice or a coach. But we had jerseys...

I don't remember who got this started, but I think it was one of those things were someone said it would be fun to have a RISD football jersey and it snowballed to around 25 -30 guys signing on making possible to be printed up in a affordable bulk order. We each got our name on it and picked our numbers. 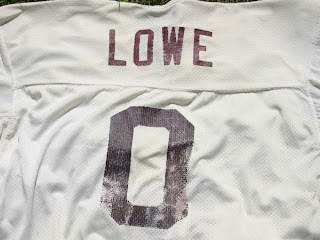 We just wore them around campus feeling cool. We did play a football game at the RISD beach/farm one Saturday afternoon, but it was really an excuse to have a keg and BBQ party. I can't find any pictures of anyone wearing the jerseys. I think we took a team picture once but I may just want to remember taking one. I do have a video from the beach party (I should get all my old videos transferred to disc). I'll try to post it one day.

I still have the jersey though. It's a great thing to still have and never found at the RISD bookstore. I'm not going to try to put it on again, I just know it won't fit anymore. 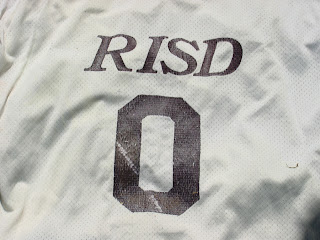 My old friend and roommate Mike and I went to the COMEDY STORE one night when he was visiting in LA. The comedian on stage asked where we were from and we told him we were students at Rhode Island School of Design on vacation. He knew our school saying...

"Oh RISD... (to the audience) ...it's an art school. Their football team sucks but the banners look amazing!"

A good joke.
Posted by Dave Lowe on Friday, August 31, 2007
Email ThisBlogThis!Share to TwitterShare to FacebookShare to Pinterest
Filed under: RISD Years