The Making of BATMAN FOREVER

A set I designed and made for a 1 hour promotional special on the SCI FI Channel in 1995. The making of BATMAN FOREVER . Like many previous sets I did in the mid 90's, I went with foam core painted scenery (I was foam core addicted then). The SCI FI channel set budgets were extremely low. I mean really, really low. I was offered a non negotiable amount of money to create that included my own fee. The bigger my vision the less I got paid. As cheap as it looked, it could of been a lot worse had I actually wanted to pay a bill that week. As a matter of fact, the Christmas light night sky background walls and rooftop edge were parts from another set I designed for the same production company.

The producers were great though, not demanding much or micro managing the design knowing the budget so tight. There are other production companies I've worked for that locked me into the same deal and milked it till I made zero profit. Oh, I've got stories of to tell one day. 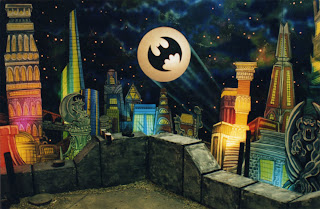 I wanted the set to look like a panel from a comic book... graphic, hand drawn, using bright and saturated colors. The wonky feeling was intentional. The clouds were spray painted on. The bat signal was a back lit, tracing paper skinned hole in the wall with a foam core emblem glued on. I made each building randomly, loosely thinking about size and scale to each other. It's hard to see in these pictures but it was lit in washes of color like the film was and helped the comic feel. 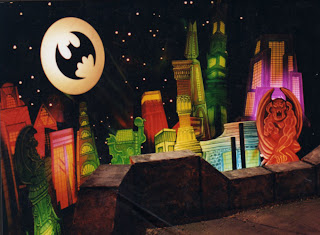 Even though, like all my old set design, I would love to go back in time for another crack at it, I think the set looked good. We had smoke drifting from chimney pipes, creating a nice atmosphere. The bright colors really transitioned well to clips from the movie. Host Mike Jerrick and his tongue in cheek humor held sell the cartoon feel. Looking back, my only want... I should of made the cityscape in better perspective.

Back in those days, money and time was always against me. I'd dive head first into creating the set as I designed it. It was a really great learning experience and trial and error period. Sad thing is, I've learned...even with a bigger budget and more time, nothing changes.
Posted by Dave Lowe on Thursday, July 19, 2007
Email ThisBlogThis!Share to TwitterShare to FacebookShare to Pinterest
Filed under: Sci Fi Channel