I had a very long day at work that ended around 9:30 pm. I was tired. Driving home, I told myself I have to do a RISD 20 year anniversary post because I've been slacking the past few weeks.

The real reason is... all the doctors say it's good for me to have a healthy routine.

It struck me, these stories should be fun for me to do and not feel like homework! Better to not post at all, than post with no heart!

Once home, I checked my e-mail. My friend Rene sent me a link to a short "behind the scenes" video from the new Indiana Jones movie in production. Click this to see...Indy getting geared up! Watching it 5 times over, it got me energized with an 80's nostalgic 2nd wind.

Tucked in between the pages of one of my old RISD period sketchbooks is this old promotional postcard. 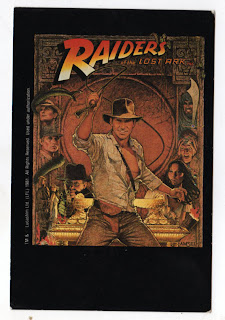 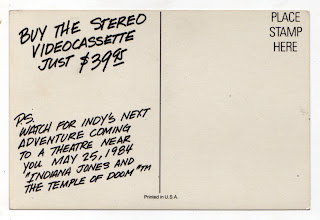 I often comment to my friend Megan Jeffrey about how much old stuff she has saved from those years and posts about in her "flashback Fridays". I had so many real and significant scrapbook items I never saved over the years...

and this is one thing I did save?

It has to be the final nail in my geeky dork boy coffin! My socially accepted geeky dork boy facade is Star Wars. My private one is Raiders of the lost Ark.

Looking back at my RISD years, Indiana Jones was always there...

A giant sized "Raiders" poster hung in my dorm room for a couple of years. I miss it...especially being a classic illustration by the late, great Richard Amsel. I have no idea where it is now. It's probably still rolled up in the basement storage at Congdon House. Left behind with much of my other stuff I forgot to take home to LA after graduating.

I had a really great "Indy " looking leather jacket that was worn almost everyday (even the rare warm ones). Combine it with the khaki safari shirt I had...well, I looked like a chubby fan at a convention like in this photo circa 1985 with Paul while helping Steve Gentile on one of his student films... 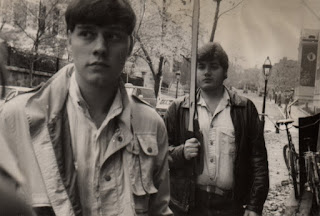 I had a fedora I got as a Christmas present from my Aunt Joan and Uncle Joe. I brought it to college and wore for fun often. Here I am with my brother Ted, Steve Miller and roommate Mark Nayden. Oh Man! Someone stashed booze under our freshman dorm beds again! Oh well, let's get rid of the evidence... 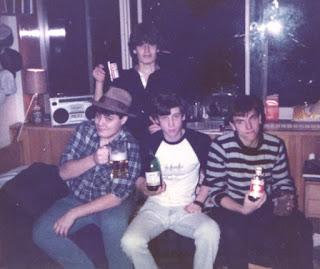 My buddy, Pete Whitehead, would put on the fedora every time he would hang out. Soon, it ended up in his room. Pete had one eccentric habit then... he liked to wear a goofy hats while working at his drawing board. The fedora became one of his favorites and it did look great on him. It became his. Sometimes he wore it on top of the gorilla mask he also often wore.
Posted by Dave Lowe on Friday, July 13, 2007
Email ThisBlogThis!Share to TwitterShare to FacebookShare to Pinterest
Filed under: RISD Years