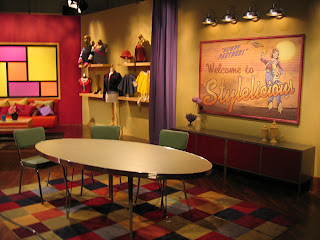 TV production is often cold and unfeeling twords the time and craft that goes into making it's sets. Once it's on tape, unless needed again, it's just junk taking up space. Sometimes it feels like an artistic "one night stand".

Old sets are normally destroyed or might be recycled into new ones. Set dressing is sold, donated or saved to be used again. Custom props or dressing made specific to that show are quick to end up in a dumpster.

The set I designed for Stylelicious, now airing on the DIY Network, is officially retired. I was asked to help "tag" set pieces in storage that would move to the big studio in the sky. The show is not dead, it's planned to return one day in a new format without a set.

Because of the earlier described, I was surprised when Joel, the executive producer and Nicole, the production manager at Screen Door Entertainment (the company who produced the show) asked me to save and dust off the set's billboard wall art I designed/illustrated. They wanted to hang it in the home office. Here it is behind Jesse Kelly - Landes, Vickie Howell and Jennifer Perkins, three of the show's eight hosts from the Austin Craft Mafia ... 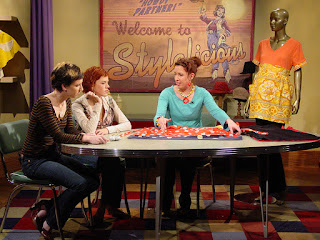 It now lives in the company conference room...it's a nice compliment they wanted to keep it. 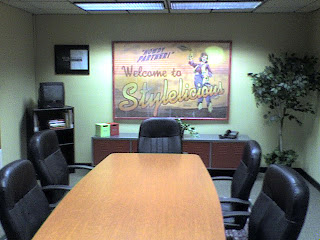 I've been asked by Screen Door to work on many projects when they need me since 2002, so I've never felt my work unappreciated. Having the billboard kept and hung up is an acknowledgment to every one's hard work on the show.
Posted by Dave Lowe on Wednesday, June 20, 2007
Email ThisBlogThis!Share to TwitterShare to FacebookShare to Pinterest
Filed under: Tales of TV Work