Yes, Devin...there is a Santa Claus.

This is a belated Christmas story.

Early in December my sister Megan told me her concern that my niece Devin was already doubting that Santa exists, she was confused and questioning it. Megan remembered the fun when Santa was real as a kid and she wanted Devin to experience it as well.

Devin did not elaborate as to why she doubts but Megan thought a few of her pre school classmates were telling her Santa was not real as they might have parents who don't believe in raising them with the myth.

Megan hoped that I and all the family would, atleast this year, help Devin to believe in a workshop at the North Pole. I was happy to help. I had my reservations, I remember when I learned the truth last year. I was very depressed. I think believing in Santa can be some of the best memories of youth. It is for me. A warm feeling of mystery and magic I treasured.

Devin wrote a letter to Santa. It was a tightly folded piece of paper with no stamp or address sitting at the bottom of their mailbox. I took it... to write back as Santa. Opening the letter I discovered Devin either has a long way to go in grammer (I'm the last person who should make that comment) or she wanted stuff from IKEA. 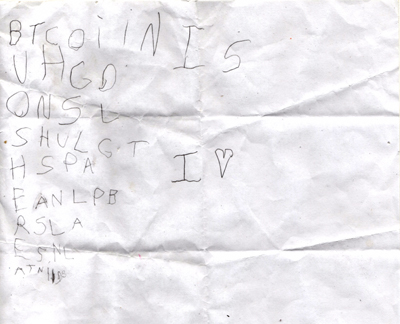 Her Dad, Paul, translated it to me later over the phone. I dropped off Santa's response the next week while they were out. Santa told Devin... He will try to get everything she asked for and with a specific request to leave mac and cheese for his reindeer because they love it. The best memory of Christmas 2006?... Megan calling me on Christmas eve with venom and sarcasim in her voice

"I just wanted to thank you Uncle Dave. I'm in the kitchen, making mac and cheese for all of Santa's reindeer."

Making Christmas fun for my niece and torturing my sister at the same time...priceless.

On Christmas day the family got together at Megan, Paul and Devin's house. Amid the festivities, my brother Ted and I casually snuck into the backyard with a Santa hat hidden from view. I became a human step ladder helping Ted hoist himself up on the roof. He walked slow and steady to the chimney just in case Devin might hear his footsteps sitting in the living room below... and of course walking so not to crash through the ceiling under a weak beam. That would of been a great holiday surprise! Ted artistically drapped the hat on the chimney and made his way back.

Ted getting down from the roof is a whole other story...including my brother in law Kirk getting involved making it a real 3 stooges routine. Ladders are a good invention...must remember one next year. We stepped inside and announced

With great overblown bad acting, drama and fuss everyone went outside.
Devin looked up, her eyes went wide and with a big smile on her face she said

"It's Santa's Hat. " and then with real concern she added...

For that one brief moment she was a true believer. Her reaction made me believe again. Mission accomplished. 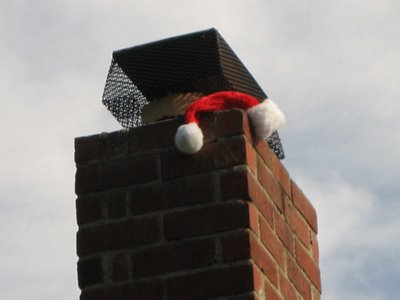 Epilogue: Ted had to climb up again and he dropped the hat down. My Dad ordered him to stay up there until we could get a ladder so he could get down safely. Being Christmas day all the stores were closed. The next day each of us assumed the other would go buy a ladder to let Ted down. None of us had. No one realized this until last week when Ted did not show up for a family get together.

We found Ted still up on the roof, patiently waiting. He kept warm by making a coat and fancy headdress from roof shingle. He wanted to be known as... "Overlord of the Chimney Gnomes and Keeper of the Holy T.V. Antenna". He also demanded freedom for the "leaf people" stuck in the gutters.

The Doctor says his therapy is going well and the dementia will pass.
Posted by Dave Lowe on Saturday, January 20, 2007
Email ThisBlogThis!Share to TwitterShare to FacebookShare to Pinterest
Filed under: Niece Devin